The folks at Milestone, an Italian developer whose bread and butter for the past 20 years has been racing games, appear to be starting 2019 as they mean to go on. After releasing a whopping five titles based around various brands and motorsports in 2018, the team is back with yet another officially licenced racing simulation. Monster Energy Supercross - The Official Videogame 2, (which gives Peter Jackson’s King Kong: The Official Game of the Movie a run for its money in the category of Most Unnecessarily Long Winded Title) doesn’t deviate from Milestone’s prior output, offering enthusiasts a realistic and focused take on the racing discipline in question.

Monster Energy Supercross - The Official Videogame 2 - or for the sake of a less bloated word count, MES2 - as is the norm for any racing simulation worth a damn, gives players a variety of options to tailor the experience to their own skill level. Set the physics option to Standard, for example, and you’ll be presented with a fun, nippy, almost arcade-like supercross game. Switch over to the Advanced physics setting, however, and every corner, bump and jump is an obstacle that requires careful navigation with pinpoint precision. Additional options further enhance or scale back the realism of MES2, such as AI competence, manual or automatic transmission and having to manually shift your rider’s weight around in order to get the optimal line around corners or acceleration when landing jumps. MES2 is as easy or punishing as you want it to be, expertly catering to everyone from supercross novices to the most hardcore of fans and it remains extremely satisfying to whiz around on two wheels however you choose to tinker with its settings. Furthermore, MES2 begins with an easy to follow tutorial that gives newcomers a rundown of the game’s mechanics and techniques, such as scrubbing - whereby you steer your bike and lean your rider’s weight in opposite directions in order to get the maximum amount of distance off a jump with the minimal amount of height. These tutorials are a much welcomed addition in light of their absence in Milestone’s last game, RIDE 3, giving new players a fighting chance at remaining competitive.

The fact that MES2’s core racing gameplay is so much fun is a good job really seeing as, depending on your inclination to do so, you’ll be experiencing a lot of it. MES2 might only offer three career seasons to take your custom created rider through (the third of which is actually the first two seasons combined into one) but how much you eke out of the career mode depends entirely on your dedication to getting the full supercross experience. Each season spans a number of weeks with each main event taking place over the weekend. You’re able to simply jump right into the race proper, or you can choose to toggle some or all of the qualifying stages on or off so as to start the main event in the best possible position. MES2 also allows players to adjust the race length, with a full race and set of qualifiers running in at around an hour, so if you’re planning to go full-on simulation with MES2, prepare to be in it for the long haul.

In addition to the actual racing, each week in a season gives players a variety of optional extra activities in the lead up to the main event. You’ll periodically be required to sign a contract with a sponsor - which generally last three or four weeks - and you can spend your non-racing days doing promotional spots for them to earn extra credits. There’s also media events, in which you talk to either journalists or fans to earn more fame. While fame is required to unlock some of the more rewarding sponsorship deals and credits can be spent on further customising your rider, actually participating in either the promotional or media events isn’t involving in the slightest. They essentially boil down to watching your rider stand in front of a bike or watching poorly animated supercross competitors nod at journalists and sign autographs in complete silence. Some player agency in these scenes would have been welcome, but as it stands they feel like padding in a career mode that - provided you’re making the most of the racing portions - really didn’t need it. 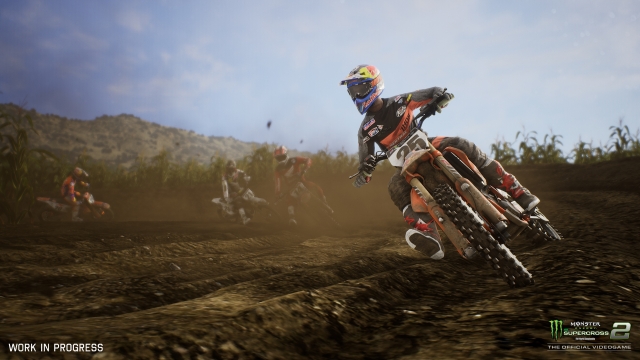 One side activity that does prove useful, however, is training. On one of your days off you can opt to take part in one-off races against a rival or participate in specialised training exercises that will help you hone your skills in one of the many aspects of supercross. Having trouble perfecting those scrubs? Hop into the exercises dedicated to helping you overcome that hurdle. Performing well in these training sessions awards you stars, earning enough of these unlocks extra portions of the Compound. This is an open area that exists outside of the main career mode and serves very little purpose other than letting you generally mess around at your own leisure, but it’s a fun little diversion nonetheless.

Outside of the main career mode, players can dive into one-off championship events, single races and time trials. Online multiplayer is also supported for up to 12 players. Aspects like the available assists, AI difficulty and the physics are set by the host, while the tracks you race on are decided upon via a voting system, as are the weather and track conditions you’ll be contending with. There’s nothing remarkable about MES2’s online functionality, but during testing it ran smoothly and the time spent in lobbies between races was brisk.

The last bit of icing on the cake comes by way of a track editor, allowing players to create their own supercross circuits inside a variety of stadiums and share them with other supercross fans. The editing tools themselves are fairly limited, but nonetheless allow for deviously tricky to navigate combinations of bends and jumps to be cobbled together in mere minutes. The wealth of content available within MES2 is wrapped inside a generally decent presentation. The stadiums and circuits look okay, but improve tenfold in the rain when the wet mud of the track glistens under the floodlights and the competitors end up filthy by the race’s finale. The game does tend to stutter somewhat at the start of each race with so many riders on screen at once, but after the first corner the framerate evens out and remains steady throughout each event. In terms of sound design, you probably already know what you’re getting into here. The cheering of a thousand rowdy supercross fans is accompanied by roaring bike engines, all bookended by commentary from Ralph Sheheen and Jeff Emig, whose lines repeat frequently enough that nobody would blame you if you skipped them. One thing worth mentioning is that I did encounter a couple of sound-related bugs: the music skipped frequently during loading screens, while the ticking noise that plays when you earn fame or credits on a few occasions decided to play indefinitely, continuing into every other part of the game until I shut it down completely and restarted.

Presentation niggles and minor audio bugs aside, though, Monster Energy Supercross - The Official Videogame 2 (phew!) is a worthwhile purchase. Its scalable difficulty and length make for a title that supercross enthusiasts of all skill levels will be able to get enjoyment out of, while its wealth of content will keep fans slipping and soaring through its mud-soaked circuits for many hours.

Unnecessary padding in the career mode and a few presentation blemishes detract somewhat from what is otherwise a more than competent and content-rich supercross sim, which caters to fans of all skill levels.