Is there an article, review or—hell—even a single discussion online about Mortal Shell that doesn’t involve the words “Dark” and “Souls”? Admittedly, in a gaming landscape where FromSoftware’s revolutionary bonfire mechanic has become almost as ubiquitous as the double jump, seemingly every new release takes inspiration from Dark Souls. Still, Mortal Shell crosses that intangible ‘inspiration’ line and marches straight towards mimicry with such gusto that it’s impossible to avoid directly comparing the two. Thankfully, just enough twists to the familiar formula, and one particularly outstanding combat mechanic, helps Mortal Shell stand apart from Dark Souls and earn its keep in an increasingly crowded genre.

I accuse Mortal Shell of edging dangerously close to mimicry, but that’s not as much of a criticism as it sounds: it’s a symptom of the game being a real labour of love from a team of genuine Souls fans. The team at Cold Symmetry, the game’s developer, admitted to being “collectively obsessed” with the Souls genre in a recent Reddit AMA, and that obsession is made manifest in Mortal Shell’s weighty and satisfying timing-based melee combat, as well as the creepy, cryptic lore that seeps out of every murky corner (not that I could any more explain it to you than fly). Dodge rolls, parrying, strange yet friendly NPCs, items with mysterious descriptions—it’s all Souls, it's all here and a lot of it is done well. 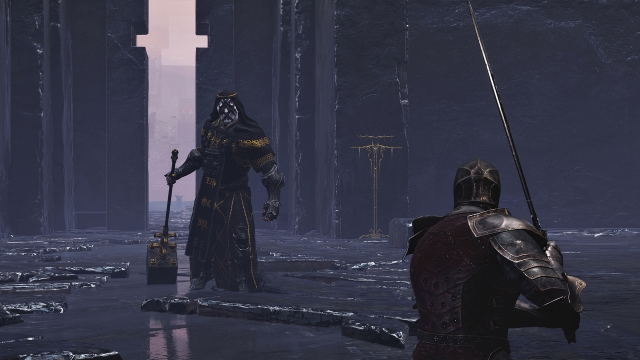 Note that I say “a lot” and not “all of”. There is no avoiding the reality that Mortal Shell is a smaller-scale project than Dark Souls, and where it attempts to recreate the latter’s formula, it falls short almost every time. Combat—while not bad—is shallower than you’d expect with fewer weapons (only four, with a fifth ranged offering), basic weapon movesets and an almost complete lack of non-humanoid enemies (which gets a little dull).

The environments, too, aren’t all that varied. Cold Symmetry has done what it could with creating a fully realised, surreal world on what is, presumably, a relatively modest budget. Rather than a sprawling, interconnected world, Mortal Shell offers a main ‘hub’ with three lengthy ‘dungeons’ to visit, each culminating in a boss fight. Throughout these, the game spans roughly four or five distinct environments that, while looking sharp graphically, fail to stay interesting for the game’s duration. Adding insult to injury, the game’s most striking location, a heavenly sky-realm known as Eternal Narthex, unfortunately loses a chunk of its appeal thanks to also being home to an arduous ‘find the five switches’ section that’s neither fun nor quick; it’s easily the worst part of the entire experience.

Unlike Souls’ deep, stat-based character building system, Mortal Shell instead gives the choice of four playable ‘characters’ (really, they’re suits of armour possessed by the game’s undead protagonist) with ability, health and stamina differences between them. These can be swapped between throughout the game and come with their own distinct, albeit limited, skill trees (or skill circles, more accurately). Character progression is minimal with 12 or so upgrades per character; there’s really not much else to spend your in-game currency (tar) on other than these scant upgrades and in-game items, which really does feel like a significant waste.

So, like an admiring little brother emulating his elder sibling’s stride, Mortal Shell attempts to emulate so much of what defines Dark Souls as a franchise. It’s a shame because when the game departs from what came before, it truly begins to shine and carve out an identity of its own. This is most evident in the game’s ‘harden’ mechanic. Acting in place of any sort of shield-based block, hardening essentially sees your character turning into stone, rendering them impervious to any single attack (after which the stone will ‘shatter’, continuing whichever motion you had begun upon hardening). While it’s dependent on a cooldown period, you can harden at any point—mid-attack, mid-roll or even falling from a great height—and maintain your momentum upon un-hardening. This adds a whole new layer to combat which, as far as I can tell, is a complete innovation. It evokes the feeling of being a Venus Flytrap as you wind up attacks, harden and then complete the attack the moment your enemy’s strike shatters the stone. Hardening and dodge-rolling, the two primary methods of avoiding damage, each draw from their own limited resource pools. Thanks to this, combat becomes a tense game of resource management and cooldown windows that requires serious concentration; it’s engrossing, often unforgiving and a lot of fun. 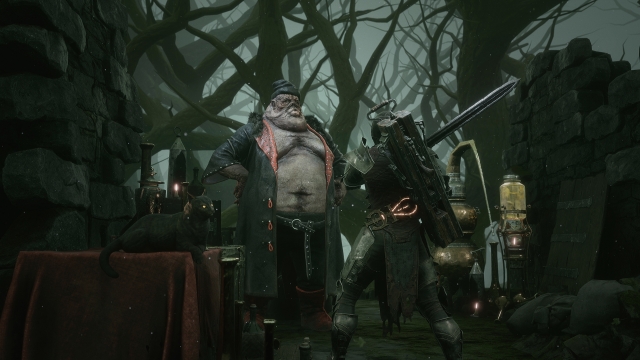 On top of hardening, Mortal Shell’s healing mechanics are another change that set the game apart from its peers in terms of moment-to-moment gameplay. Rather than powerful, but limited, healing items (read: Estus Flasks) that refill upon reaching a checkpoint (read: bonfire), Mortal Shell’s main source of healing comes from parrying enemy attacks and following up with a health-draining counterattack. I’ve never been too good at parrying in Souls games and my experience here, unfortunately, was no different. Needless to say, I didn’t get up to much healing in Mortal Shell, but I’m hesitant to blame the game for that one: I really do just suck at parrying. There are some healing items to gather too, but these aren’t plentiful or useful enough to rely on and barely warrant a mention.

In conjunction with the aforementioned mechanics, there's an interesting ‘second chance’ death recovery mechanic that sees your undead character ejected from their vessel and given a second chance at life. It does a good job at mitigating the difficulty that comes from the scarce healing items, but in practice it serves as little more than a second health bar, not impacting the gameplay in any meaningful way. Additionally, an item familiarity feature increases the potency of items and consumables after a certain amount of uses. Again, this is a nice idea, but it doesn’t shake up the gameplay in any way that feels significant. A number of parry-based counterattack abilities (including the all-important health-draining one) add an additional layer to combat, but the incentives to use the non-healing abilities seemed non-existent. While they’re not very well integrated into the game, these features do cement Mortal Shell as more than a Dark Souls clone. Perhaps in a sequel these concepts could be fleshed out; they’re undoubtedly interesting and with a bit more polish, could integrate into a tight set of gameplay systems. It does pain me to say, however, that there is one nasty, suspension-ruining pothole on this road that we've yet to pass: bugs. As my journey through the world of Fallgrim continued, bugs and design flaws grew as a threat on-par with the enemies themselves. At first, it was just a matter of abilities failing to trigger and counter-attacks teleporting me backwards a few dozen feet—relatively harmless, if a little annoying. As the game drew to a close, however, bugs contributed to a fair number of my character’s deaths. Most infuriatingly of all, I wound up dying mere seconds before defeating the final boss thanks to an attack that sent me straight through the floor and into the dreaded void that lies beneath all 3D game worlds. Each player’s experience will vary, but let’s just say that if mine were a house, I’d be calling the exterminators: there's more bugs here than on an ice cream left out in the sun.

Critics are comparing Mortal Shell to Dark Souls in the same way that supermarket-brand cola compares to Coca-Cola; I don’t think that’s fair. Mortal Shell builds, it invents mechanics and introduces ideas of its own, even if it falls short on some fronts. For that reason, it rises above the label of “copycat”. While Cold Symmetry hasn't outdone FromSoftware by any means, it still deserves praise for introducing some genuinely novel ideas. Mortal Shell is well worth checking out if you're into unique combat mechanics or atmospheric game worlds. Watch out for those bugs though: they’re a killer.

An engrossing combat system and numerous novel gameplay mechanics save what would have otherwise been merely a passable Dark Souls tribute from total mediocrity. Sadly, there’s still too much harming the experience to justify a wholehearted recommendation. It ain’t Souls and it certainly ain’t polished, but it's not terrible either.