With a quintessential Italian surname like D’Angelillo and passion for motor-racing, you’d think that motorcycles, MotoGP in particular, would be right up my street.  You’d be wrong, very wrong. I’ve not once placed my backside on the seat of a motorbike and when it comes to motor-racing I’ve always preferred the four-wheeled variations.

The two-wheeled variety always passed me by, so much so that just the other day, while my friends were taking part in a motorcycle trackday at Donington, I was sat at home in the comfort of my sofa and entering the world of MotoGP 15.

The third addition to the annual franchise from Italian developers Milestone has, like other iterations of the game, come in under the radar - likely missed by a huge chunk of the gaming community. Four-wheeled racers, be it the likes of Gran Turismo, Project CARS or the Formula One series, are ten a penny these days, and the same can be said for the likes of arcade street-racers and open world ‘drive from A-to-B to receive your mission’ sandboxes. Whatever type of vehicle in your game, bikes always seem to get the raw end of the deal, like the least successful stepbrother of the automotive world. Your first few minutes in MotoGP 15 make it very apparent. Why? Because bikes are in fact a million miles away from the comfort of a four-wheeled enclosed car. Think you can brake late into a corner and zip through the pack on the inside? Nope. Think you can open the throttle mid-turn? Nope. Take everything you’ve learnt from racing games and riding bikes in Grand Theft Auto and throw it out the window. MotoGP 15 is a completely different beast. Yes, you’ll be kicking yourself early on when you skid into a gravel pit or come off in a less than glorious fashion after a slight change of direction; but these are the essential steps to take on your path to becoming champion. You’ve got to get back on that horse, as they say.

Don’t be put off by the thought of constantly falling or crashing through, as with many simulators, there are numerous driver aids to help you on your way, whatever skill level you are. If you keep losing control in corners, turn down the bike physics. Find yourself oversteering? A steering aid is there for you. Struggling to slow down? A braking aid will soon stop you. Whatever your skill level is, you’ll soon feel like Valentino Rossi as you race through the pack.

Once you’ve refined your driving skills, (and trust me, you’ll need to if you’re a newcomer to a motorcycle simulator), there’s the usual slew of racing game features, no more or less than what you would expect in other other licensed racer. Single races, Grand Prix weekends, time trials and race events -- modes that allow you to re-enact iconic moments from seasons gone by -- are all present, but the disappointing thing is that a number of drivers and teams are locked until you level up or download the DLC. So if you fancied a quick race with one of the lesser known drivers, you’ll have to progress and earn XP. This is easily done in career mode though, and luckily this is where most of your time will be spent. Again, if you’re familiar with licensed racers you’re going to feel completely at home, so much so that at times I had to check the back of the box to confirm this was not a Codemasters-developed game. You create your character, designate a race number, choose your attire and enter the world of racing all while selecting options from your globetrotting trailer. While customisation isn’t that important when you only see your character through the visor on his helmet, it is disappointing your character can only be one of 16 or so predetermined designs.

Rather than jumping straight into a prestigious MotoGP team however, you craft your skills at the lower levels, testing for teams in the Moto2 and Moto3 feeder series, truly earning a race seat rather than just being handed one. Once the moment comes it is extremely satisfying. 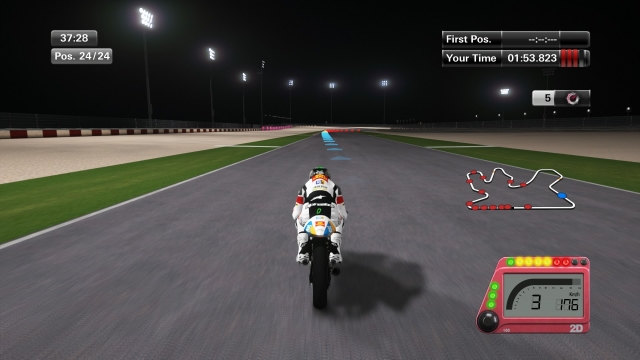 If you really fancy a challenge though, you can create your own team (providing you’ve earned enough money) and buy bikes, design the livery and hire drivers. A nice touch in a game where you can quickly do everything.

Once part of a team, you are set challenges to beat and given tests to attend to continually earn upgrades for your bike, and you don’t need to know anything about engineering to get the most out of your upgrades either. While the complex set-up menus do remain, Milestone have introduced a handy feature for those who, like me, are completely clueless when it comes to mechanics. When you speak to your engineer pre-race, you can ask him a number of questions, things like “I’m struggling in corners” or “we need more speed”, this in turn will have him tweaking the suspensions or adding higher gear ratios. Whatever your mechanical ailment, you can have it solved in a matter of moments rather than tweaking with a near-infinite amount of sliders. MotoGP 15 does fall a little short of graphical prowess we’ve become accustomed to on the current-gen consoles though. While the likes of Project CARSand Driveclub offer some of the most realistic vehicles in any game, MotoGP 15 falls short on a number of levels. The bikes of course are the highlight, but the tracks that they race on all lack heart. The bland grey on the tarmac is a million miles away from the weathered inches of iconic circuits, and the crowd cheering you on is nothing more than a mix of coloured sticks. The physics of falling all seem a bit off too, when you come off in a dramatic collision your driver almost hovers on the track, with no weight to the fall you would think the rider was made of helium.

It goes so far with realistic bike physics and set-up only to be pulled back a peg or too with the secondary features which, if done right, are what make a good game great. It’s an exciting game for fans of this particular series but one that struggles to truly immerse yourself into a race weekend.

I may have never ridden a motorcycle or have a clue how any of the mechanical intricacies work, but that certainly didn’t stop me from having a whole lot of fun with MotoGP 15. The dips in graphics and steep learning curve can be more than made up for in what is a solid MotoGP simulator and perfect alternative for those bored of racing cars. 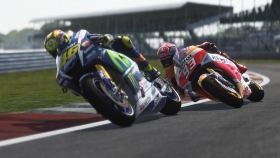