First off, I haven't played the original Muv Luv. So picking up Muv Luv Alternative, I knew there would be certain things I would miss or not understand. Whilst it does work as a standalone title, I can safely say that playing the prequel is highly recommended. This is a non-spoilery review and won’t delve into the nitty gritty of what happens or its ending because it’s best experienced relatively blind. However, there are potential spoilers for its predecessor, to avoid those, skip to the last paragraph for an overview of Alternative. Review spoilers though - I really enjoyed this VN.

As a quick catch up for the uninitiated, the chronology of the original series prior Alternative and the Steam is Muv Luv Extra then Muv Luv Unlimited. However on Steam, both of these games are packaged under Muv Luv. The timeline itself is that Alternative takes place after Unlimited, but is prior the actual events of Unlimited. Takeru Shirogane (the main protagonist for the series) is time traveling for all intensive purposes, talking anymore is spoiler territory and further explaining the timeline would take a bulk of the review. The gist in Alternative is that Takeru tries to undo all of his previous mistakes from Unlimited, and tries to beat the BETAs who have been dominating Earth for the past 30+ years in that timeline. For better or worse, it practically goes zero to sixty in the course of a chapter. Information is thrown at you like a wood chipper pelting you with the mashed remains of a tree. Retrospectively, this is actually for the best because this information is developed more and more as it enters its second and third act with all its revelations. 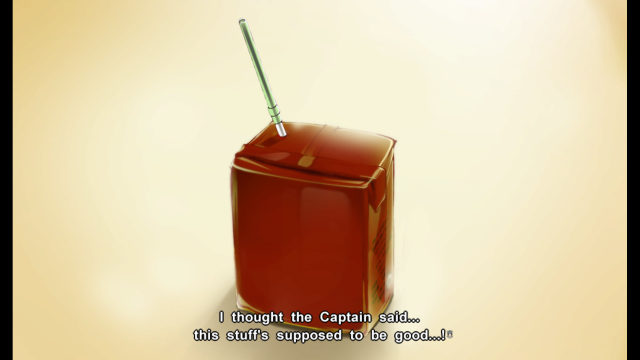 It's a juice carton, how bad could it be?

The characters are best summarised as a family of misfits who, over the course of the story, become people you adore and cherish. Covering the events from Unlimited, the first chapter feel like a game of catch up as we receive a super condensed, hyperspeed version of the main cast's character arcs. However, that isn’t to say they aren’t developed or well written characters, despite flood of information and emotions that are thrown at you. What makes this an incredibly compelling VN despite its length is the lack of direct pandering for most part with its harem genre. Compared to other VNs of length, which this is arguably a mid length VN with a linear narrative, the “insert gag for interesting moment” is relatively low thanks to the superb writing. Also, unlike other mediums with a huge cast of characters. Alternative manages to keep the overall character scope and their relationships very focused with little deviation as an attempt for quick comedy, hence the comparison of a family of misfits being the most apt description. Whilst this is still well paced and hard to fully criticise, since these are staples of the VN genre with the slightly longer and slower paced content. It does show its age as a VN from the previous generation.

For the unaware, if they were worth their salt, VNs as a whole were originally packaged with eroge elements. Those with experience of yesteryear’s VNs will be able to pick on the scenes with “that beginning and resolution mini arc” for the eroge moments. With that generation, it had a mixed bag with its main characters who you were meant to emulate. Whilst Takeru follows that similar vein, he isn’t as generic as other VN protagonists. His main love interest and his constant yearning for Sumika can still be called very vanilla in that regard, but what can be said is that its use of endearment is warranted. At times feeling like a romcom - just without the com - during the flashbacks of his old world/timeline. Also, arguably the removal of the eroge elements is probably a positive for the game. Having not seen or read into any of the Muv Luv eroge, I can’t fully comment on its “necessity”. However, during those mini arcs, it’s clear that the exclusion of it has helped kept a consistent narrative, that most eroge games would raise an eyebrow at with its value on monogamy and yet still engages in polyamory in equal parts. As well as their undying and unwavering attention for the main character you’re meant to embody, who luckily here is likeable. Though that isn’t to say you couldn’t argue the harem tag is an insert for more attention. 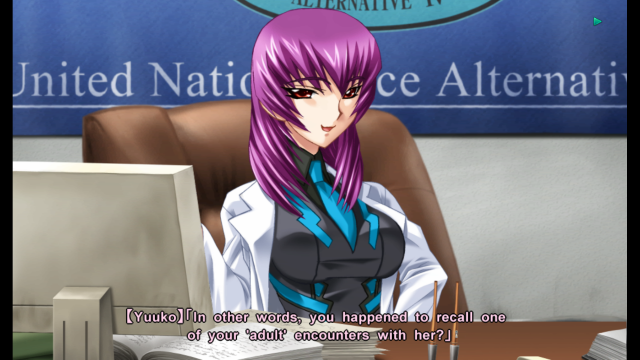 At least that explains those weird feelings.

But you could argue that the harem genre is almost a disservice in that regard, although certain aspects of the story use it as a method of explaining certain events and character interactions. Unlike other VNs of this kind, the inclusion of its large female cast is well developed with more intimate scenes feeling natural. To the point the fact that the cast is predominantly girls creates a chemistry a more mixed gender wouldn’t be able to capture, for better or worse depending on taste. At the very least, they stray from the typical tropes, becoming independent characters than your run of the mill “insert love interest here” trope. However, that doesn’t mean it always fly so smoothly or feel very yesteryear during certain scenes - which isn’t at its detriment.

Some people might know this series for its mecha genre - rather than its romance - and it doesn’t disappoint in that aspect. VNs typically aren’t that animated, being rather static. Alternative’s use of animation and effects make the action scenes really explode and help liven up its exposition dumps. That isn’t to they nulled from being tiresome, just be warned its use of pseudoscience and logic is potentially more painful for some people. But at the very least, it isn’t as egregious as Steins;Gate with its McGuffin X or Y Ex Machina to keep the plot going. The animation whilst not mind-blowingly good like Nekopara (with it's animated EVERYTHING), it does sit above the standard in this genre of games. The more shocking implementations in this VN were its animated cutscenes and level of voice acting, which raised the more emotional moments beyond base expectations of a VN. Turning what could’ve been a run of the mill lengthier VN with the harem genre stuck on it with a nail as a selling point to something incredibly special. 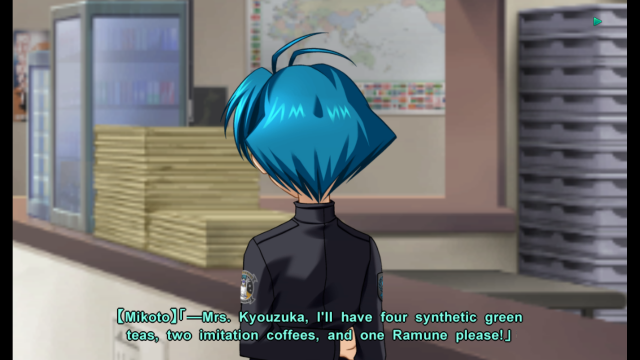 I'm glad we can acknowledge Ramune being artificial.

Speaking of implementations, the VN as a whole is well made with the expected trimmings of a good options menu. It makes use of Binaural Atmospheric Sound Utilizing HRTF Technology, which is basically fancy talk for a stereo/effects ladened audio so that it isn’t as flat sounding. Surprisingly, despite how flashy everything is, I had almost zero hiccups when playing on my Aspire R11 with its Celeron N3050. My only gripe is the lack of adjustable read speed, but honestly that's more of an inconvenience as not everyone reads at the same speed.

Overall, I am very much split on how good/great this VN is as a whole. Having not played the first one I get the feeling I’ve missed out on key details, but then the pseudoscience and its logic irks me to the core with the main character’s dumbness/over simplification. The scope of Alternative is an average, if not above average, anime source material. With the overall pacing matching the typical flow of a VN, it maintained a consistent narrative that doesn’t fumble too much along its way. With the main thing that made an impact for me being the interpersonal relationships between Takeru and his female comrades and its ability to not be absolutely cringe worthy. But looking back, despite the lack of character/story familiarity this is something most people can jump into given the “previously on Muv Luv” that Alternative does so well.

A high score with the caveat that it’s a VN that kept me thoroughly entertained through its thick and thin, highs and lows, as well as the assumption that this is the culmination of series as whole.