Need for Speed is a series that I’ve wanted to be good again for so long now, but it feels like years since we have received an entry worthy of celebration. With last entry Need for Speed: Payback being one of the biggest missteps in the series, it was looking grim for the franchise which is why I was worried about the announcement for Need for Speed: Heat (NFS: Heat).

NFS: Heat needed to bring the franchise back to its roots of crazy car customizations, great arcade-racing, and a cool setting/world to drive around in and I’m happy to say, it does all the above. NFS: Heat feels like a return to form for the franchise for the first time in years, even if it never does anything revolutionary.

NFS: Heat takes place in a fictional Miami, Florida-inspired setting called Palm City and it’s a great playground to drive around in either the online and solo options, but I mainly stuck with solo. The city is filled with tight corners while the open field areas are all about long highways and wide curves which all make for some great races. There are a lot of races throughout Palm City: even after finishing the story there was still a lot to do. There is a good amount of variation for races as well with more unlocking as the game progresses like time trials, off-road and drift trails to keep things fresh. 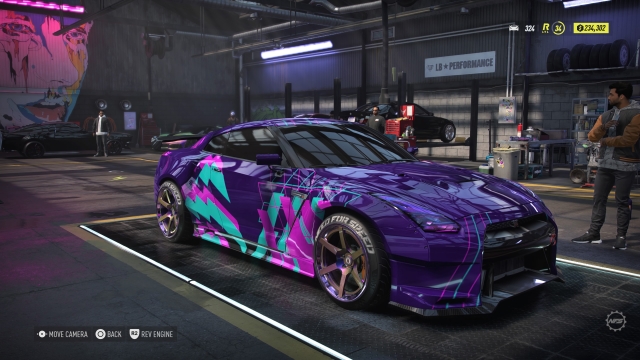 The main hook for this new entry is the ability to switch between daytime and nighttime within the menu manually. During the day I was earning money racing in legally sanctioned races as part of the Speedhunter Showdown event going on in the city, while at night I was earning reputation in illegal street races and getting chased by cops. The two feel like different experiences from each other and while that could be a good thing if they’re both equally great, I definitely enjoyed driving at night more than the day for multiple reasons.

The daytime racing was still fun to do and it never felt like a chore, but the developers, Ghost Games, made the nighttime more of a risk/reward system with the cops and that made it a more familiar NFS experience. During the day the main goal was to make money to buy new parts/cars to get a higher car score, but at night I had to increase my reputation level. This mainly involved street racing, but I could also get a heat level at night whenever cops see me, and the higher the heat level, the more reputation points become multiplied.

The risk is that a higher heat level means more aggressive cops and getting caught can lead to a fair amount of money and reputation loss. Once I hit heat level three, the cops became a real problem and became its own risk/reward system to get rid of them because once busted, the heat multiplier drops to one and the cops take a lot of cash. Each car has a health bar which is important to pay attention to when in a cop chase. There are gas stations that can repair the car up to three times at night, but after that, the cops will shut down them down. The day and night modes is a great and addictive system that was made all the better by allowing me to switch between them whenever I wanted for whichever currency I required. This day and night systems plays into the surprisingly decent, but generic story of cops versus street-racers as well, with missions requiring a certain car score and reputation level. It’s not a great or memorable story by any means, but the characters are well-acted and that does a huge favor for it because it kept me semi-engaged with what was going on. I got to play my own custom character with an unexpectedly robust character creator. It was mainly for features (hair, beard) and clothing as I selected a pre-made avatar out of 12 options, but an impressive selection nonetheless.

The cars themselves feel amazing to drive and, from the handful I got to drive so far, they all feel rather distinct from each other. Drifting is a huge part of this entry but it’s handled a little differently in NFS: Heat with the right-trigger (the gas) being the activation. Usually, it would be handbrake or the actual brake while accelerating, but this time, it’s tapping the gas and then holding it again as I took a corner. At first, it was strange and it took a little while to get used to, but I did eventually and for those who can’t, there is an option to change it to the brake instead. Once I got upgrades and some faster cars, hitting those max speeds down a long road felt really good and the sense of speed I felt was kind of nostalgic. Tuning and customization are back to where they should be after the disastrous card system of Need for Speed: Payback. Customization feels similar to classic games like Need for Speed: Underground where I just have to go to a garage and buy the parts/cars with money I’ve earned. Performance parts are used to upgrade the car score so they can compete in higher-level races as the game progresses. Performance parts and cars were unlocked the higher my reputation level was while customization options are all mostly there from the beginning. While there are a ton of options for customization from the get-go, I discovered that there are even more to be unlocked when I started getting collectables around the map which there are a lot of as well. There is a good amount of selection for vehicles, with normal everyday cars to the supercars, but it could be better as I usually go for the Toyota Supra for one of my main cars, so it was upsetting to see no Toyota cars at all.

Visually, NFS: Heat looks fantastic, especially at night, which is another reason why I prefer the night to the day. I prefer the visuals at night because of the incredible lighting in the game and how it glows during the night. It just oozes that Need for Speed: Underground style that I loved so much and it looks insane on a PlayStation 4 Pro with a 4K HDR TV. I still enjoy driving in the day because the change in scenery was nice and it still looked great particularly when it was raining (which is the case for the night as well), but the world just popped more at night. The animations and loading screens for the game also look amazing, especially the transition from day-to-night (or vice-versa) which was always awesome and rather fast. I did notice some pop-in textures every time I entered the game, but it fixes itself quickly and runs great afterwards. I did also have three major crashes where the game would crash my entire PS4 Pro making me hard reset the entire console though. At first, I thought it was because of speed since the first two times it happened when I was going at maximum speeds, but the third time it happened at the beginning of a race. I’m not sure of the cause now, but hopefully it gets patched sooner than later.

As for music, the selection is very fitting to the vibe and world they wanted to build even if all the songs aren’t for me. It’s cool hearing different songs for both day and night, but again, I prefer the songs that play at night over the day ones because they are more of what I actually listen to.

Need for Speed: Heat feels like comfort food for fans who’ve loved the Underground/Most Wanted games from back in the day. The day and night system is addictive, the cars feel great and distinct, the visuals are fantastic (especially at night) and the old-school customization is back and better than ever. It never does anything unique, but what it does do, it does very well and because of that it was one of the better NFS experiences in years.

Like comfort food for fans who’ve loved the Underground/Most Wanted games from back in the day. The day and night system is addictive, the cars feel great and distinct, the visuals are fantastic (especially at night) and the old-school customization is back and better than ever.