The World Ends With You released in 2007, innovating with the use of the DS's two screens that allow you to control two characters at once. Fast forward to 2021 and after 14 years, several remasters and ports, and even more remixes of "Twister", we finally have the sequel: NEO: The World Ends With You. So, is the wait worth playing the Reapers' Game or is it better for the game to be erased?

Please note: I recommend playing the first The World Ends With You, particularly the Final Remix version as this game goes directly from that. It’s not a requirement, but context is important. I also won’t be talking about anything past Week 1, Day 7. 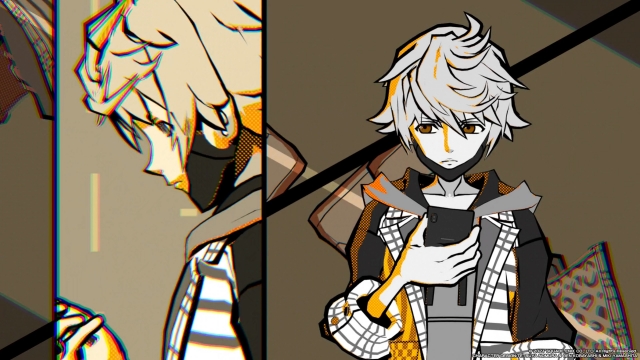 The world ends with you too.

"Greetings, Sheeple of Shibuya! The Game has begun anew!"

The story goes that two teenagers; Rindo Kanade and his best friend Tosai "Fret" Furesawa, find themselves trapped in Shibuya and the Reapers' Game, a twisted ARG that grants Players with psychic abilities. Not only must they survive seven days, they must fight creatures called the Noise and compete against other teams of Players for the chance of escaping the Game… or face erasure from existence. The story is pretty good with… enough references to the previous game to satisfy fans, and the characters are endearing and weird at the same time. You have characters like Sho Minamimoto, a math term-slinging Player with his own goals, and Nagi Usui, a college-age otaku who likes dating sims a little too much. And they join your party and form the Wicked Twisters.

I should point out that there are English and Japanese dubs you can switch between. The English dub is pretty good (two grating voices notwithstanding though probably on purpose) and the characters are acted well. Although, I’m pretty sure Fret shouting “Galaxy Brain” will be outdated in a couple years (or it is already outdated.)

The game has quite the unique style, with Tetsuya Nomura’s hand oozing into his depiction of Shibuya and the characters. Buildings will bend as you approach them or make you seem like you're running on a globe in some areas. This also means you can’t control the camera outside of combat. I personally don't like the camera angles in some areas, and the buildings bending as you approach them disoriented me a little, but I quickly became used to both. I do wish I could control the camera freely, however. The camera switching made me get a little turned around.

Now, can I gush about the music in this game because it freaking nails it. Soundtrack goes for a more metal emo music genre, in contrast to the more pop emo genre of the previous game. I enjoy it immensely and I thoroughly recommend wasting money on buying the music in the in-game shops all throughout Shibuya. That way, you can listen to it whenever you want and even change the menu music. Some of my personal favourite tracks include "Your Ocean", "Someday (NEO Mix)", "Breaking Free", "Set Me Free", and "The One Star (NEO Mix)". 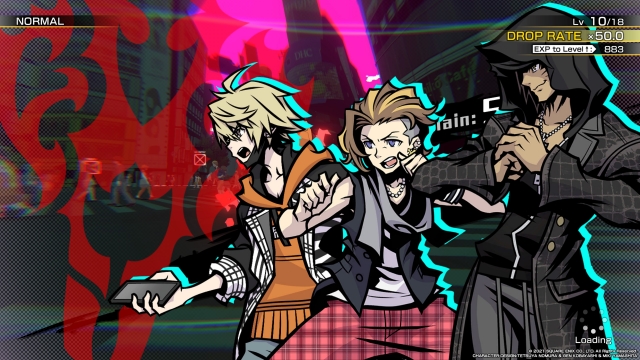 What makes this series (with technically only two games to it) is its combat. Players use the power stylish pins to perform psychs, ranging from slashing with energy blades, blasting bullets, setting stuff on fire, telekinetically throwing cars and vending machines and bombs that grow like in Bomberman. However, only one pin can be assigned to a character and you cannot equip two pins with the same command type like rapidly tapping the Triangle button. And you control four characters at the same time and you are encouraged to use them all at the same time. Don’t let them stand around, have them attack as well. Have Rindo slice up a scorpion Noise while Fret blasts it from a distance by mashing both Triangle and Square at the same time, while having Minamimoto and Nagi charge up attacks to unleash once Rindo and Fret run out of energy, The faster you complete battles without taking a lot of damage will also power up your pins more depending on the grade you're given.

Personally, I love the combat. It's frantic and satisfying when you have your tactics down, but I can see that my general strategy throughout the game would be Rindo on melee, Fret on shooting while Nagi and Minamimoto charge their abilities. I'll use different kinds and types of attacks, sure, but that’s going to be how your buttons will be set up. Two buttons to mash, two buttons to hold.

You’ll also have to manage your Groove all throughout battle. Upon fulfilling a certain condition based on each pin, an indicator will pop up telling you "Drop The Beat". Attacking the targeted enemy with a different pin's attack will increase your Groove. Hit 100% and you can unleash a devastating attack, which is different depending on the psych that was used to hit 100%. However, using only one psych or doing nothing will rapidly cause it to drop. Being aware of the situation is paramount in the tougher fights against bosses or stronger Noise.

And just like in the original, lowering your level and increasing the difficulty will make enemies drop more and rarer pins, especially when chaining random encounters together to further increase the drop rate (up to five at the start). A risk/reward system that'll certainly encourage Players to fight more difficult battles. However, extra difficulties (as well as other special items and abilities) will need to be unlocked with the social network. It not only keeps track of the various people you meet throughout the Reapers’ Game, but spending FP (Friend Points) on the various nodes unlocks things like health bars for enemies, Easy and Hard difficulties… and learning how to jump over specific railings. 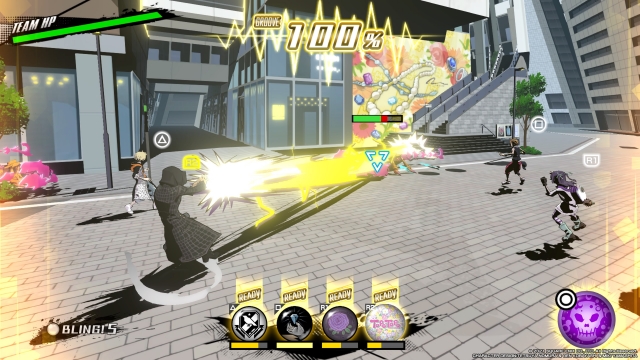 Outside of battles, you’ll be running around Shibuya completing missions, which will require some work that doesn’t always involve erasing Noise (although it mostly ends up with you erasing Noise). Luckily, each character has a special ability that affects the minds of the people. Fret can Remind people of certain things and events, Nagi can Dive into the mind and erase their negative thoughts, and Rindo can time travel to change their fates. Reminding people just involves rotating the stick to create a clear picture and it’s a little fiddly. I wish it was a little more forgiving. Dives are combat challenges against the Noise which have effects on them such as increased damage or health drain. Completing them fast enough will earn bonus FP. Replay is the most involved, requiring quite a bit of thought on what happened throughout the day so you can go back and change it. Dives and Replays are the most fun while Reminds aren’t exactly engaging.

While you’re out in Shibuya, you may as well do some shopping. Eating at the various restaurants throughout the district is the only way to gain stats like HP, ATK, DEF and, most importantly, Style - which allows you to equip more kinds of gear. However, you'll need to work off the calories gained from meals by getting into fights. Particularly hearty meals will take a while to work off so don't overindulge. And if you do, you cannot eat until the gauge is completely empty. So go and buy a can of fresh air at Vegelovers, which somehow has 428 calories, to equip the latest fashion.

"The rhythm's gonna set me free...Hey baby, move your body, shake it on this battleground..."

Speaking of gear (or “threads”), they can affect fights way more significantly than with just flat stats boosts as every piece of clothing comes with an ability. Some generic, some specific to certain characters, and some encouraging brand loyalty. You might want to forgo good stats if the ability is worth it or appropriate for your setup. Unfortunately, none of the clothing shows on the characters so you can’t create fashion disasters.

However, I did encounter some grinding moments in the form of literal walls. Some require you to answer quizzes, fight Noise and a variety of other tasks set by the Reapers guarding the walls. The most annoying one is when I needed to wear something from Joli bécot to continue during the early game, where I just learned about shops. You can only equip threads if you have enough style for them. The lowest style requirement out of all the items was 82. My highest style stat (Coming from Sho) was 33 and the only place I could eat at only increased style by 1, and by 4 if I was lucky. I spent a good hour or two eating as much as I could then fighting so I could eat again to get past one wall. That probably needs a patch.

For completionists, you have your work cut out for you. Not only will the average playthrough be around 50 hours, there are 107 Tutorial Books, 51 pieces of music, 333 pins, 277 threads, 95 different foods to eat, 92 Noise to kill, and, of course, all the achievements to put up on your graffiti wall that will show in Udagawa (cool little thing by the way). Yeah, you might want to start early. Be aware that some Noise can only be encountered in certain difficulties, and some pins require specific conditions in order for them to evolve. A guide will be required (whenever that’s released) but don’t worry, you can always go back to previous days and complete anything you missed. Have fun. 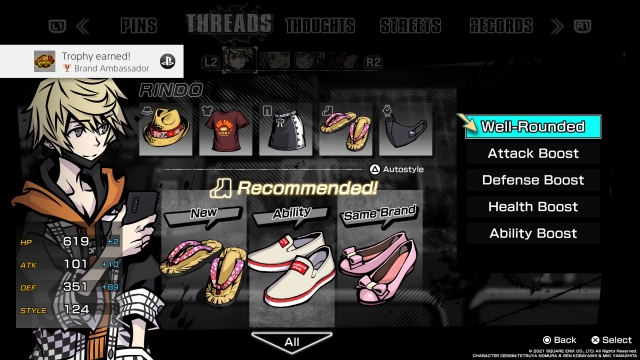 I should mention that clothing is genderless. The guys can wear fancy dresses for the great stats and abilities as long as you have the style.

I played on my PlayStation 4 Pro, and my game ran rather smoothly with no notable frame drops both wandering around Shibuya and battling the Noise, except when things started to go crazy and I started spamming junk. No, I mean, literal junk. I had a psych that rained trash over the Noise. I do feel a little bothered that there's a small yet noticeable load for battles. It's not a snap like with most RPGs, it's more like a quick pause then go. It might be the loading icon at the corner but it should be noted.

Overall, NEO: The World Ends With You is an excellent Action-RPG that satisfies fans wanting more, or newcomers who want a unique experience from their games. However, there are some annoying points in the game (especially that grind for style I did) that might worsen the experience. However, that didn’t bother me enough to affect my verdict and add it to the increasing pile of favourite RPGs of the year.

NEO: The World Ends with You (Reviewed on PlayStation 4 Pro)

NEO: The World Ends With You is an excellent RPG that satisfies fans wanting more, or newcomers who want a unique experience from their games. However, there are some annoying points where it could worsen your experience.

NEO: The World Ends with You Gets Final Trailer 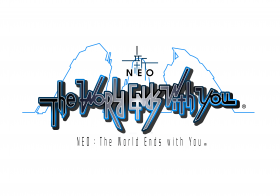