Let’s start with what No Man’s Sky is; it’s a procedurally generated universe consisting of over 18 quintillion planets for you to visit and gather resources from. You then craft these into a variety of items before you inevitably power up your warp drive to continue your overall quest to the center of the galaxy. 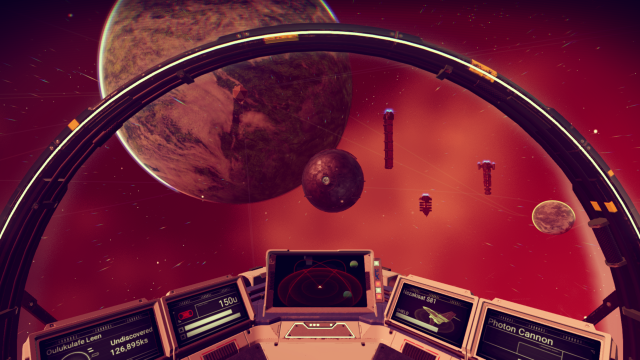 You start the game on a random planet at the edge of the galaxy, your ship damaged and in need of repair. A damaged robot offers you the choice of following Atlas’ guidance or to fend for yourself. Accepting Atlas’ help starts you on the closest thing to a story No Man’s Sky has, pushing you to visit the mysterious Atlas Interfaces out in space, each one getting you closer to understanding your place in the universe.

The basic tutorial then kicks in, having you gather resources to repair your ship’s thrusters, visit a space station and eventually fix its hyperdrive and craft a warp cell to let you warp to another system before letting you loose. If you’ve accepted Atlas’ guidance you’ll then have vague directions to follow that get you on that path otherwise you are now free to play how you want. Atlas’ path is always open to you, as is reaching the centre of the galaxy so there is no rush for anything.

So, what is there to do? Well, initially it all feels very intimidating and vast. 18 quintillion planets to look at, your first thought is to head to another planet and see what that’s like. You could be very unlucky like I was and have the first four planets you visit be barren toxic wastelands with very little in the way of features or you could stumble onto a beautiful verdant planet that you then proceed to take lots of screenshots of. 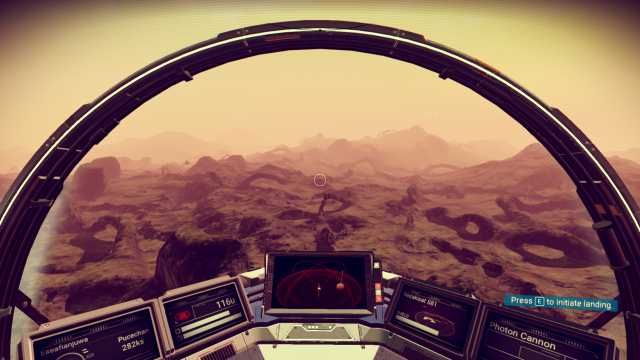 Once there you go about gathering the resources for another warp cell (or five) and start exploring. To start with this is great as some of the planets are truly beautiful and have features that other games just can’t produce, like overhangs and subterranean cave networks. Finding what resources look like and gathering the required things is fun, floating orbs of metal providing copper, red spiky crystals providing plutonium, each interesting to discover.

Visually the game can sometimes come together to create beautiful homages to 70s sci-fi book art, just as promised but a lot of the time can just as easily look like someone smashed two colour-clashed varieties of modelling clay together in a really slapdash manner.

As you gather materials you might upset the mysterious Sentinels, the anger of these robotic guardians depends on the planet you land on and whilst some won’t blink when you destroy a huge mound of iron, on another planet that would see you attacked by a whole gang of the blighters just for looking at it. A quick blast or two with your mining laser and you shouldn’t be bothered by them anymore however as they are rarely a challenge to defeat. 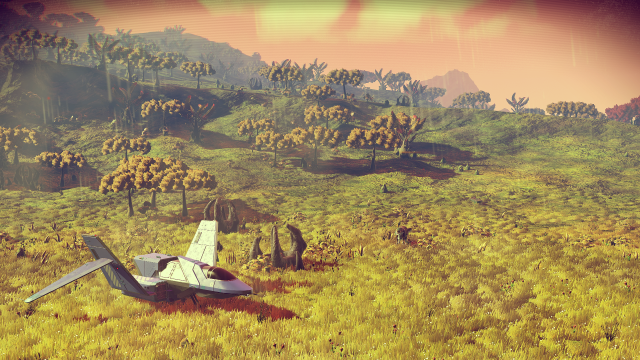 Life is milling about and you can catalogue the creatures you find, giving them names if you so desire (this also extends to the planets and systems). Ultimately naming things doesn’t have much point but it’s a fun thing to do, on a planetary/system level this can help you navigate back to places you’ve been. You can sell your catalogued data to earn some money and in theory if another player visits systems you’ve named, they’ll see the names you’ve given things.

Once you’ve named all the things and gathered all the resources you head to the station to sell what you don’t need. You can exchange cash for other ships you see dock as well as sell and buy with their owners. Exchanging basic resources with the solitary physical NPC on board the station can net you words of their language or other benefits like a health top-up.

Each planet has a selection of points of interest to visit, which you can initially find via ship scans or from interacting with buildings on the planet surface. Some act like spaceports duplicating station functionality, some provide access to new crafting recipes or crashed ships to repair. Again, exciting to visit each type to see what they offer. 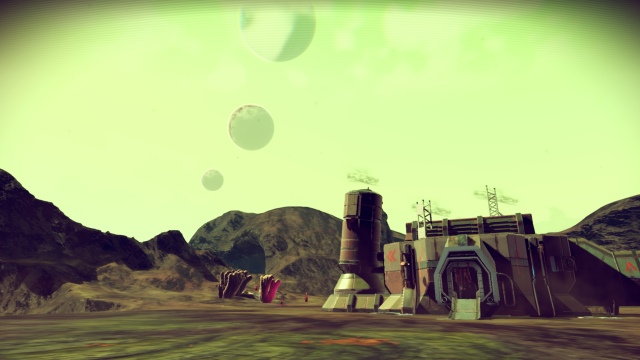 And then you go to another planet and realise it has the exact same resources, the exact same points of interest and nothing unique to discover, the resources might be a little scarcer but everything you will ever need is on every planet if you look hard enough. This makes exploration almost redundant except for the fun of discovering interesting terrain, you know exactly what buildings you are going to find and exactly what awaits you at each type.

As a space game it is also lacking, ship combat happens occasionally when you drop out of warping to a new system or if you are carrying ‘valuable’ resources but is again, rarely threatening. Eliminating enemies with your basic cannon or laser is basically point and shoot until they are gone and you get some resources as a reward.

Travelling in space also just feels like a glorified menu screen. You don’t generally get the feeling of travelling vast distances. You arrive at anything you can see within seconds, which is great for not wasting your time, but it makes everything feel really tightly packed. 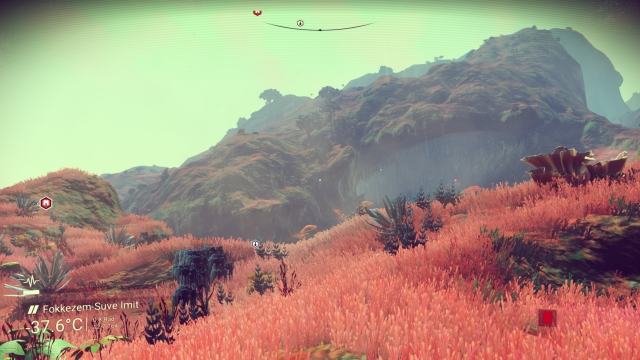 NPC interactions and trading are also really basic: there are three main races, the Gek, the Vy’keen and the Korvax, each with their own language you can unlock understanding of from ruins and interactions. You have standing with each but it doesn’t really affect anything only what basic reward you get from talking to them.

Trading essentially doesn’t exist as whilst there is a galactic market and prices do fluctuate from system to system, these differences don’t seem based on anything so it’s essentially luck, the trading interface is basically just there as somewhere to dump excess stuff to. That’s not even getting into how hard the game makes it to navigate to places you’ve been. You can’t bookmark anything or search for names, relying purely on being able to navigate the 3D galactic map.

What about the Atlas story and getting to the centre of the galaxy though? Well, I don’t want to give any spoilers as what story there is is deliberately sparse. I will say that you shouldn’t consider No Man’s Sky if you are after a plot or interesting narrative, it was certainly a disappointment to me after 35 hours of repeatedly gathering the same materials for Warp Cells as I made my way to the centre. Which is a shame as the setting and the alien races are certainly interesting. 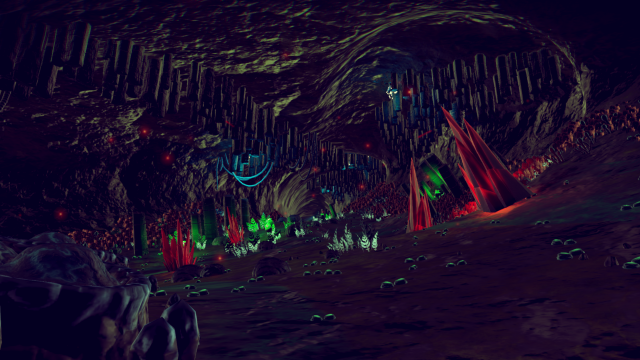 But even after all that being said, I still enjoyed my time with the game once I stopped thinking of it as a space combat/trading/exploration title as it was marketed and just played it as a relaxing resource gathering and exploration game. The resource gathering is satisfying (even if there isn’t some huge periodic table of elements as hinted at before launch) and you can see some wonderful terrain from exploring, both those elements can feel fun, there just isn’t much point to them. Whether those elements are worth the full retail price of £40/$60 is another matter entirely.

The other elements of the game, space combat, trading, NPC interaction and crafting are just so wafer-thin and vapid and almost none of what was hinted at pre-release is present in those sections. Technically it’s a marvelous accomplishment but as the game it was marketed as it’s sadly just not very good.

No Man's Sky (Reviewed on Windows)

An impressive piece of technology capable of generating some truly gorgeous vistas, the game layered on top however disappoints in almost every way and just has no depth. Planets are fun to wander around whilst gathering resources to move on but you won’t linger.

Got to agree with the score...

Its a good game, but, with Elite Dangerous out there, it needed to do something special and it didnt.

Maybe in a later update they will add more stuff, who knows, but right now its just not entertaining enough to warrant more than an hour or two on.