I’ve never hidden the fact that I dislike the concept of roguelikes and roguelites, because I just hate having my progress ripped away from me. However, I have an incredible fondness for games that allow me to destroy literally everything that stands in my way: cue Noita.

A side-scrolling pixel-based roguelite that sees you trying to unlock the secrets of the dungeons ahead of you, where every pixel can interact with every other pixel. Wood burns, acid melts, explosions disintegrate and so on. Since hitting Early Access in September 2019 I’ve played around 80 hours, and went through a period of eight months playing at least one run daily. Since release there has only been a couple of weeks where I did not play Noita at least once! Suffice to say, I quite like it.

As a roguelite, you’ve got to expect death will grab you at some point. You’re equipped with a magic wand and the ability to levitate for a short time, and that’s about it. As you explore the randomly generated dungeons you’ll come across more wands with different spells attached to them, as well as flasks of potions/poison/lava/water. You can also find monster eggs, which once thrown will spawn a monster that will kill for you. 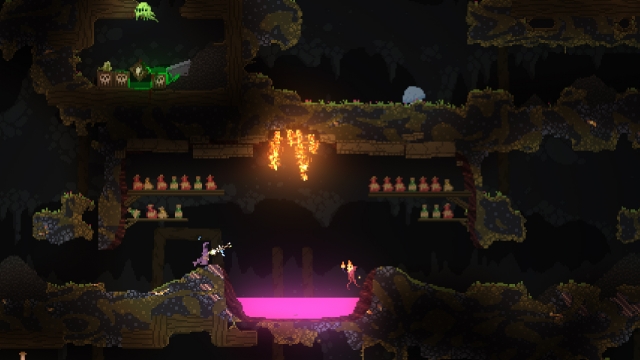 There are literally more spells in Noita than you can hope to see in 80 hours of play. I’ve only encountered 176 out of the 302 available, which includes almost useless things like fireworks & torches, as well as the rarer holy hand grenade bomb & nuke. You can hold four wands and equip them with whatever spells you currently have, whether that’s from buying them or just taking them from other wands. A word of warning, however, there are wands that will use a spell at random, so if you put a nuke on your laser wand watch out!

Awaiting you in the dungeon are 126 various ghosts, robots, worms, monsters and more, eager to kill you in a variety of ways. They want to hit you, shoot you, burn you and freeze you. As you might expect, each one is filled with something such as poison, acid or just plain blood. Get that on you and it can hurt you, set you on fire, or give you a critical hit bonus depending on the substance. Luckily you can use some of the various substances to your advantage - firing lightning into water will conduct it nicely through your enemies. If there’s metal nearby it can go further! Oil or whiskey lets them catch fire more easily, acid will burn them… There’s a lot going on! 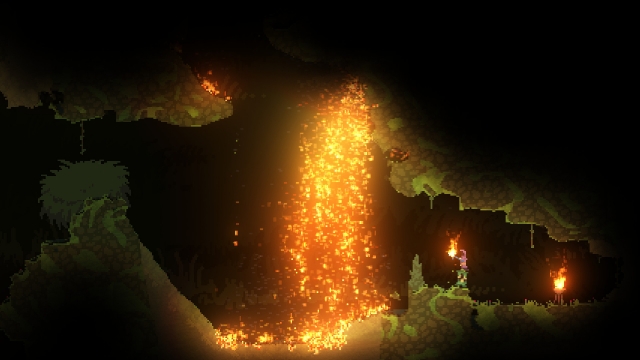 Aiding your quest are safe areas in between each dungeon, which allow you to replenish your spells, buy new ones and edit your wands. Monsters drop gold when killed, though there are veins of gold in some rocks, and chests dotted around. Since Early Access, however, one gold nugget isn’t worth as much as it used to be… Before leaving you are able to pick one of three perks, with options such as more health, explosion immunity and revenge tentacle. That last one is good for punishing melee enemies.

Of course, if a normal run isn’t doing it for you, there are multiple options. Daily Run will equip you with different stuff to normal, and set you out against a dungeon with a specific seed, rather than entirely random. Everyone has access to the same seed, so you can see how well you do compared to your mates. Then there’s the Practice Run which equips you with a random assortment of wands and flasks, and puts you in a random place in the dungeon. You can retry this as many times as you want in one day, then the next day it’s randomised again. Finally, there’s Nightmare Mode which I’ve only tried a few times, because damn is it not easy. 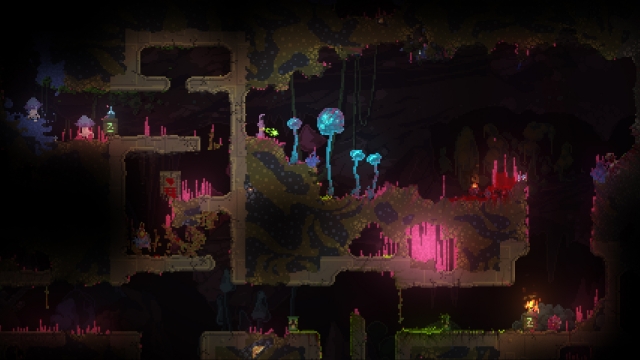 Noita is blessed with a very healthy modding community who have added spells, new robe colours, and even something to make the dropped gold remain on the map instead of disappearing in seven seconds. These are entirely optional, but I won’t lie - I installed a health mod that makes you start with 300 health instead of 100 as soon as I could. It’s easy enough to get down to the third dungeon, even with a bad spell selection, but after that it gets very hard, very quickly. I also had some fun with a mod that basically gives you a lightsaber, and spent a few hours cutting through rock to see if I could find hidden places. Worth noting - I did.

The dungeon as a whole is absolutely huge, and I hadn’t even realised exactly how expansive it is until I was 50 hours in and I saw a map that someone had created. Not only does it extend far, far below you, but you can explore the overworld too. There’s a temple, a tundra, a lake, a desert and the exact same dungeons as below you - but up in the sky.

Again, I’ve played Noita for 80 hours and loved most of it. I’ve never been up to the sky dungeons. That’s not for lack of trying, I’ve made my way to the far left of the overworld, I’ve climbed up the side of the map, I’ve reached the clouds and fought the blasted monsters - but they always kill me. 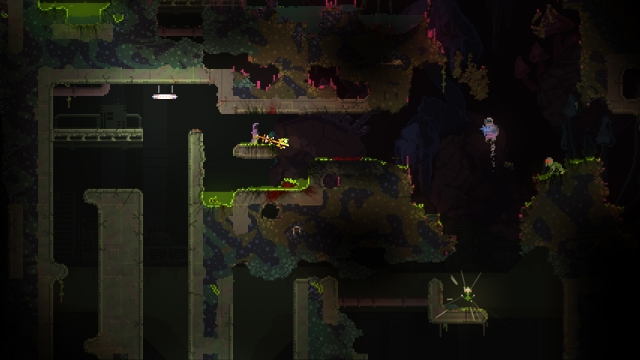 Which is probably the only negative I can say about Noita; it’s a difficult game. I’ve only reached the end twice. One was using the aforementioned health mod and vast quantities of luck, and the other was save scumming. See, the game deletes your world and character every time you restart, but if you snag the files before it deletes them… Of course, that worked during Early Access, I didn’t try it with the full release version.

Although saying that I reached the end is a bit disingenuous, as there are multiple places to “end” the game. There are secret places hidden around the map, unique perks and monsters to find… The game is big, and Nolla Games proudly boasts that a single run can last a few minutes or over 30 hours. I’ve had runs that last a few hours, because I lucked out with perks to make me immune to fire and explosions, and snagged a wand that had a bunch of nukes. Yes, that meant I was firing enough raw ordinance to decimate everything and everyone I met. Then there are the runs that end with me pinned against a wall being electrocuted by two monsters over and over, with no way to escape… 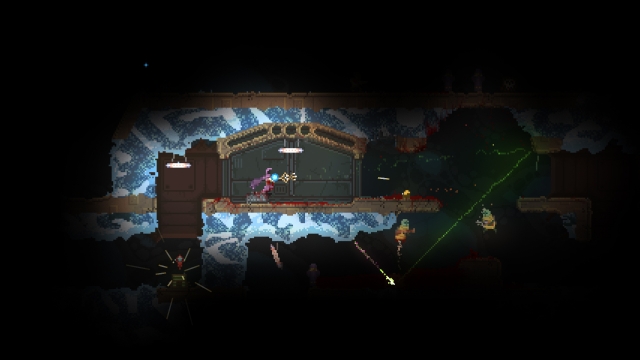 The monster and dungeon designs are great, and some locations have a much better look to them than during Early Access. You’re never left wondering if that monster spits acid or just jumps at you, as they have unique designs. Of course, my wife says the wizard you play as looks like a bunny, so maybe not all of the sprites are fantastic - though I like them. Each biome of the dungeon is also unique in looks, but also in what it’s made of, so a spell that serves you well in one might hinder you in another.

Music is used to great effect, and each biome has its own track. It never overpowers things, so a lot of the time it can be quite spooky, which fits the dungeon very well. The monsters have their own noises and grunts, and sound is a really great way to tell if there is something nearby that you should probably be wary of, as the fog of war covers things. Unless you have certain spells or perks, of course, but it’s always handy to know when there’s a sniper nearby. As you may be able to tell, I absolutely love Noita. It’s a fantastic game, even though I get frustrated from “unfair” deaths. Running out of levitation while trying to escape a mob of monsters that I’m not equipped to handle, usually. The only negative I’ve found in the whole game is how difficult it is. You’re rewarded for exploring, but man have you got to work for your rewards. But if “it kills you often” is the worst thing you can say about a rougelite, then it has to be doing something right.

If the worst thing you can say about a rougelite is that it kills you, then Noita can’t be that bad. I’m a big fan of this game and can’t wait to play some more.