Oddworld is one of the less ordinary gaming franchises. Cropping up occasionally to give us another fine experience, I was shocked to find Oddworld: Soulstorm is only the series’ ninth release since it first debuted in 1997. It continues on from 2015’s New ‘n’ Tasty, acting as an expanded recreation of the 1998 game, Abe’s Exoddus. Depicting Abe’s rise from overworked slave to being the symbol of revolution, the experience Oddworld: Soulstorm can best be described as a mixed bag.

Continuing on from Abe’s escape from Exodus Farm in New ‘n’ Tasty, Abe has been heralded as an idol by those he has saved. Now, the Mudokons can celebrate, but their freedom has yet been secured, as their enraged former captors are hunting them down. It’s a tale that’s told well, allowing us to once again get behind the ultimate underdog Abe and his Mudokon friends.

What Soulstorm does well is exactly what the Oddworld series has always succeeded in. Firstly there are the puzzles, which still find an excellent balance with their difficulty. A fair few of them are simple to figure out, but there are a varied amount that make you put your brain to use. Nothing too taxing though, just a little outside the box thinking, which makes for a nice gameplay loop. There likely isn’t any puzzle you’ll find yourself stuck on here. Possessing enemies remains a staple as well, an element of this plays into the game’s puzzles in fact. It all feels very tidy, and the little gameplay elements all slot in well together. Another great improvement is the general platforming. New ‘n’ Tasty always felt a little stiff to me, and I regularly found myself needing to make very precise jumps during the platforming segments. An added double jump makes the platforming smoother, with players benefiting with more fluid maneuverability now than ever before. Abe’s mobility still isn’t perfect, which has been a long standing issue of the series for me, but the controls are improving upon each release, with this being the biggest leap in quality the games have seen in a long time. Admittedly, the gameplay is hurt more by its new additions. Crafting is the biggest peeve, as it often feels undercooked. Often I find it better to simply possess the enemies where possible, usually doing my best to avoid crafting and using the items I’ve created as a whole. Looting also felt like a needless addition, with Abe simply being provided with a massive amount of whatever he requires before any segment. They’re additions that seem tacked on, but really just took away time from refining other areas of the game, preventing the overall experience from feeling better and bloating the gameplay for no reason. It’s change for the sake of making a change. In addition, there are few frustrating bugs, such as Abe being stuck in a falling animation that forces a restart. Getting back into the action doesn’t take long, but it can really hurt the flow of the game, especially for the longer levels.

It’s a shame the game allows itself to become bogged down because it feels obligated to give something new. Everything about the overall Soulstorm experience is an improvement on the series’ previous entry. Visually, the game is a massive improvement. Abe is much more fluid with his animation, and the levels as a whole are generally more ambitious. Not just in terms of size, but just all of the action going on. A 2D side-scroller at its core, there's environmental storytelling going on in the background of each level. Each level's backdrop is engrossing, but never overbears on the level itself, allowing the player to be intrigued in the environmental storytelling without losing their way in the level itself. The story is another solid entry for the series. Following the Mudokons remains hilarious, yet still dabbles in dark themes, keeping you on your toes. The Quarma system also adds to the game's story, with a positive game Quarma unlocking not just the game's true ending, but also the final two levels of the game. Achieving positive Quarma isn't too difficult, with the systems rating affected by how Mudokons have survived. Even if you have a particularly poor level, you can revisit the stage at any time to improve on your rating.

Oddworld: Soulstorm continues to improve on the series’ presentation. I touched on how smooth the characters were earlier, but the actual level design is fantastic. Improvements to Abe’s movement has allowed Oddworld Inhabitants to be more ambitious with the level design, and some of these levels are massive. With a total of 17 stages to complete the game, there are a fair few that can take around an hour to complete on a first playthrough. Those expansive stages are some of the best the series has had, with both its visual and technical design shining through. 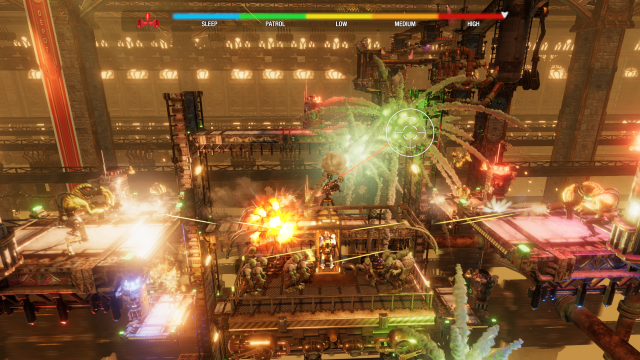 After my time with Soulstorm I couldn’t help but think it was two steps forward and one step back for the series. On one hand, it was a continued improvement on the previous installment, with so many quality of life changes that allowed for a much better experience. On the other, the game was held back by a few mechanics that weren’t truly fleshed out, meaning the game still had that rough around the edge feel. Add that technical issues into that, and you end up with experience that falls in line with the quality of its predecessor.

Oddworld: Soulstorm refines a lot from the previous games, but it comes at the cost of adding in new mechanics that never really click. The core element has improved, and it’s easy to see the franchise continuing to improve going forward, without needless additions. Soulstorm just falls that little short of great this time around, sadly.