I’m sad to report that I didn’t actually finish One Dog Story. I had to stop playing around six hours in on the chapter “Into the Unknown” because I appear to have broken the level. The stage tasked me with gathering four crystals to power a teleporter, but this proved difficult when the few crystals I had placed in the teleporter vanished, and the boxes I retrieved them from were empty. I was very confused, and my confusion was exacerbated by the falling landmasses that constantly changed the level. I think the falling world was meant to convey a sense of urgency after gathering all the crystals, which I’m positive I did, but it’s possible that they were meant to clear some of the clutter so that only the right areas remain. Whatever the intention may have been, the fact that the level reappears after I go in and out of a door was probably not supposed to happen. In fact, after using a door the entire level seems to reset, including the introductory dialogue box that provides a tutorial on the jetpack I already have. The tutorial box also insists that I need to find the crystals, which sadly seem to be the only part of the level that doesn’t reset. I have truly and thoroughly broken this stage, which may be for the best, as One Dog Story had been on a downward trajectory for the last couple of hours of my playtime.

Which is a shame, because the game makes a good first impression. Your character, dubbed EO-43, is an adorable dog-person who wakes up from a cloning vat to find the outside laboratory in ruins. So, along with your AI companion Lilith, you venture on a 2D platforming journey to the upper levels of the lab and learn what has transpired. It’s a good start that establishes some immediate intrigue, and although the dialogue is often too stilted to make the most of the game’s themes of identity and science without morals, there’s an interesting story to be had.

In addition to fast friends EO-43 and Lilith there are several named non-playable characters, but for all the screen time they’re given they might as well be nameless. For the most part, they offer nothing to the plot aside from the occasional sidequest, but these are not the most engaging affairs. They don’t tie into the main story in any way, and can usually be completed in an adjacent room. As disappointing as the secondary characters and side quests are, the main story remains decent on its own and is nicely complemented by the game’s art style. 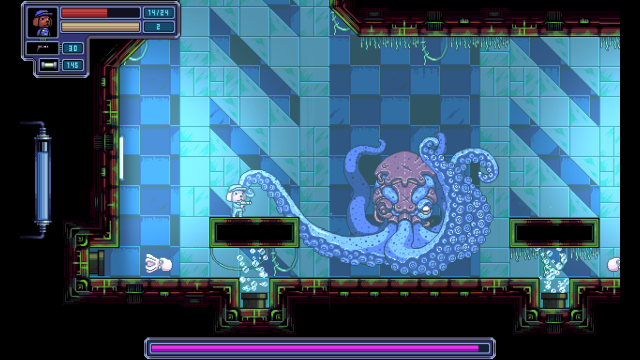 Some of the enemy design is superb. They walk a fine line between menacing and cute.
The cutesy pixel art style juxtaposes nicely with the game’s grim tone. Big headed scientists lament their impending doom and a sentient brain in a jar begs for the sweet release of death, but it’s hard to take too seriously when even the giant spider monsters wouldn’t look out of place as a plush toy. The interactive environment is also a nice touch. It’s endlessly amusing to shoot out lights or bash a giant test tube with a baseball bat and watch the goo inside spill onto the floor.

One Dog Story is oozing with style, and the only problem I can level at the art is that there’s not enough of it. There is some nice variety in the environments (because what laboratory would be complete without a fire stage), but any room with a computer terminal looks like any other room with a computer terminal. You likely won’t need to, but if you backtrack for any reason it can be difficult to tell if you’re entering a new room, or if you’ve been there before. Also, there are only a handful of character designs, so even named scientists that seem like they might be important will share a character model with some nobody.

That being said, enemy design fairs much better than friendly characters. There are plenty of angry creatures, from standard slimes to elaborate bosses that end every level. There are also a good number of guns with which to shoot these creatures, but they do mostly stick with archetypes such as shotgun or assault rifle. Still, combat is satisfying thanks to good sound design, and the ability to upgrade weapons temporarily. Weapons revert back to their initial state after EO-43 takes damage a couple of times. There is ammunition (which is universal except for the rocket launcher) as well as a currency called mutagens, but these quickly become non-issues. The idea is that the player would be forced to make difficult choices between healing and upgrading a weapon, but mutagens are so plentiful that this is never actually the case. Without trying too hard, I could have full health and fully upgraded weapons whenever I ran across a vending machine. 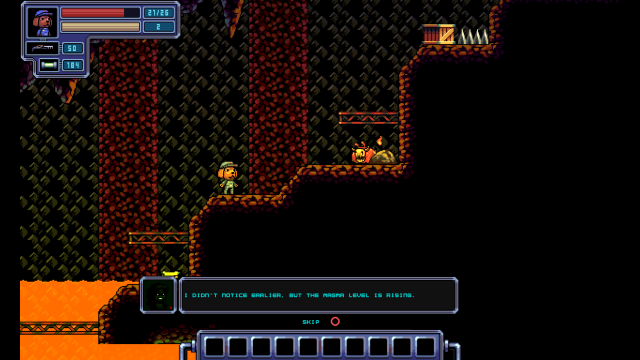 Time continues, even as characters talk. Several times I was hit by an enemy or other stage hazard while reading dialogue.
As strong as the game starts, things take a turn for the worse immediately after getting the hoverboard. There are instances of instant death in the main sections of the game, but when EO-43 mounts the hoverboard One Dog Story becomes an exercise in trial and error to find the exact jumps needed to clear a gap, but avoid the previously unseen wall on the other side. Thankfully, these sections are small in number. I was forced to hoverboard all of two times before the developers realized their error and the hoverboard spontaneously combusted. I let out a sigh of relief upon realizing I would never be put through that auto-scrolling torture again, but even after the hoverboard is disposed of there remains a harsh difficulty spike.

It was at this point that enemies suddenly gained more health and hit harder than they had previously, but EO-43’s strength doesn’t grow to accommodate. My weapons dealt the same seven hours into the game as they did at the beginning. There’s something to be said for a game challenging the player’s abilities, but by this point in the game the only strategy that consistently worked was to stand just outside the enemy’s aggro range, and take pot shots at it. If more than one enemy attacks you at once, you’re almost guaranteed to take some hefty damage. It slows the already deliberate pace to a crawl, and while things do pick up a bit with the introduction of the jetpack, it never becomes particularly satisfying to shoot these enemies.

One Dog Story (Reviewed on Windows)

It's a shame about the game’s issues later in the campaign, because there’s a lot to like in One Dog Story. The art design is great, the story is interesting, and the combat is satisfying; but poor design and technical issues hold the game back from its full potential.