The anticipation for this game was immense. Never have I played a horror game that immersed me into its world the way the first Outlast game did. The first game was so spooky, beautifully designed, and full of grisly characters. My expectations were therefore very high for this release.

The setting for the first game and its DLC was the archetypal horror setting; the foreboding Mount Massive Asylum. When I first heard the plans for Outlast 2, I was a little sceptical to begin with as I wondered whether the outside environment would spoil some of the game’s value. Thankfully, developers Red Barrels have done a tremendous job at making the game more open, better visually and audibly, and in truth, downright scarier. They alleviated my fears, by making me fear the game. The game begins with the lead protagonist, Blake Langermann, a cameraman and investigative journalist who is reporting on a news story about the mysterious disappearance of a pregnant woman. During the opening scene, the helicopter he and his wife, Lynn, are in plummets from the sky and leaves Blake estranged from her, and lost in the Arizona wilderness. From here, he is dragged into a world he could never have imagined existed.

The general premise of the game is to find Lynn and escape. Along the way you’ll make some horrifying discoveries, much more profound than in Outlast and Outlast: Whistleblower. There are bizarre points in the game where Blake will suddenly be transported into the school he used to attend when he was a child. The once busy corridors, now empty, unchanged yet unnerving. The school is really creepy, as are the lone figures you'll find looking at you down the corridors, gazing a hole through you with their eyes. Once you make it through the school, Blake will reawaken from this apparent parallel universe and back into the Arizona outback, where the horror can commence. For those who haven't played the first game, Outlast 2 brings survival horror back to its roots. The emphasis on the survival element is unwavering from the very off. Right after the helicopter plummets to the ground, you're abandoned and injured. Just like in the first game, there are no fight or flight choices to make, instead your only hope is to run and hide. All you have is your trusty camera and the desperation to escape. They even managed to make surviving harder, as some enemies can kill Blake with one hit, and most do significant enough damage to warrant using a new feature in the game. Outlast 2 has bandages loitered around the outback, which Blake uses to heal his wounds. There is even a stamina system when it comes to sprinting - as if things weren't hard enough, right? No longer can you run long distances, instead Blake will become fatigued. It's therefore important to try and memorise your surroundings so you can find somewhere to hide or escape, as running won't always be the best course of action.

As players of the demo and the first game will have experienced, Red Barrels aren't afraid to push the boundaries of what is deemed acceptable. Some of the content in this game is graphic - there's no getting away from it. Aside from the horror aspect, certain parts are not for the feint-hearted. It doesn't leave much to the imagination, but I'll digress and leave players to make their own judgment on what they experience. 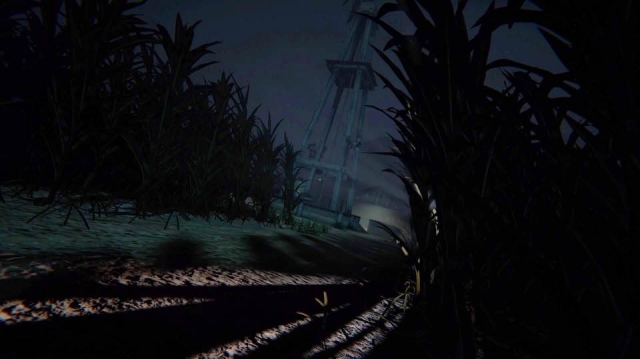 One of the elements that made the first Outlast game so creepy was how the patients in the asylum had different characteristics - you weren't sure who was going to attack you and who was going to unnerve you with their piercing gaze. Outlast 2 follows along the same lines, but with added creepiness and tension. The idea of being a lone person trapped inside the world of a twisted cult is extremely unnerving, with the Children of the Corn vibe you get from some of the cult members being especially chilling. The way they stare at Blake before vanishing into the crops is bone-chilling and puts you on edge. A notable difference I can find between Outlast and Outlast 2 is that in the latter you feel like you're constantly being watched. It's an oppressive and omnipresent feeling because of how open and isolated the game is. Most of the game is in relative darkness, illuminated merely by your night-vision camera, occasional lighting, or the spectral glare of the moon in the night sky. It literally feels like enemies will jump out of any direction at any point.

The camera Blake uses has had a major revamp in Outlast 2, with the view through it looking much sharper. There's also a cool little feature where you now have to capture certain events for your records. In the first game, anything you glanced at with the camera was saved to your files, but now you'll have to focus on a particular point for a select period of time in order to record the footage. Upon playing the footage back, you'll hear Blake talking about it, which is a nice way to add a human touch by hearing his thoughts. You can even hear nearby enemies through the in-built microphone on the camera. It's really freaky when you aren't sure what direction the noise is coming from, heightening your sense of fear. A nice extra touch is that Blake holds his batteries in the left side of his jacket pocket, and bandages in the right pocket. Everything feels that bit more intuitive and well polished. 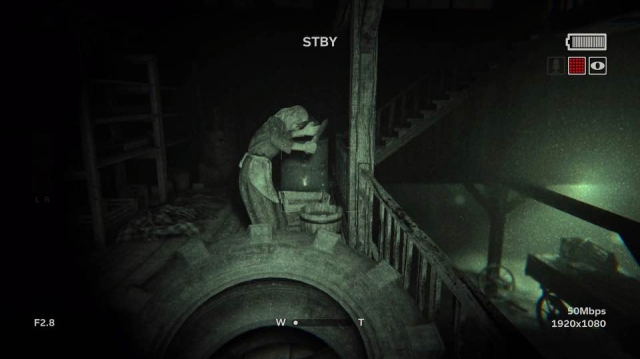 As with its predecessor, the soundtrack is absolutely incredible. It's spooky when it needs to be, but the way it can transition so quickly to make the player feel terrified is a work of art in itself. The pick up in the tempo and pitch when being chased adds to the sense of sheer heart-pounding panic. Red Barrels could release a CD of all their soundtracks and I'd be in. It's like they want you to feel every ounce of emotion, and they sure know how to do it.

The graphics in Outlast 2 have also been vastly updated. All the way from Blake to the environments and enemies you encounter, the game feels even more polished than its predecessor. The use of lighting, and what that lighting illuminates has been mastered to near perfection. One small gripe is that some of NPCs are a bit similar to the last game, in terms of their gait and some of their mannerisms. Some lack diversity, but there are plenty who are frightening enough on their own merit. There were also a few graphical issues, where enemies would occasionally phase into one another. Regardless of that, you should be too terrified to really notice anyway! As with the last Outlast game, you're probably going to be killed a number of times, so try not to become frustrated with it. Because you can't fight back and you're surrounded by a terrifying landscape where most routes to ‘safety’ look doubtful at best, and because of this, trying to escape isn't always successful. It can be annoying, but I suppose it's just a consequence of having Outlast 2 set in an open world. However, not knowing where to run to escape the cult is terrifying. There were some areas of the asylum in the first game where I could at times feel some respite, but that's not the case here. Safe spots are few and far between. I spent a fair portion of the game hiding under beds and locking doors behind me, and whenever I mustered up enough courage, I'd bolt it as quickly as possible, sprinting and searching for the nearest sanctuary.

Outlast 2 could well be the scariest horror game I have played to date. There were a few very minor gripes, but the isolation, desolation, and desperation were noticeable throughout. The sense of fear was more impactful than in the first game, and there were parts where I played hiding behind anything I could get my hands on. I went to Temple Gate, and I did not enjoy my stay. And by that statement alone, I have to applaud Red Barrels for creating such a brilliant game.

What a great review. I'm cropping myself as it downloads!

Thanks mate! Nice pun if that was intended btw ;)

Excellent review. Really looking forward to picking this up.

Cheers! Yeah, it's amazing despite the odd frustration. Great story and tense throughout.