I’ll be honest with you dear reader, I’m terrible at cooking. When push comes to shove, the food ends up charcoaled which causes me to cry over my lack of any and all culinary skills. There is hope, though! Recently, the fine folks over at Team17 Digital Limited and Ghost Town Games heard my tears hitting the floor and developed a sequel to their co-op cooking gem, Overcooked! Now if only I had friends to play it with…

All jokes aside, I must say, I loved the original Overcooked! and it’s local co-op function. It was a wonderful combination of hectic teamwork and blind trust that you really don’t see in other multiplayer titles. Sure, you could do everything yourself if you wanted, but then you’d just be ruining the experience. Now, with Overcooked 2!, the gameplay is even more dedicated to making you enjoy it, not just with other people mind you, but also as a solo option. 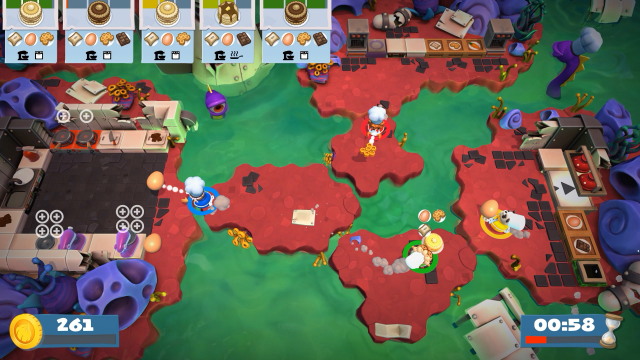 So yes, with all the roundabout commentary out of the way, Overcooked 2! is an absolute joy that does single-player and multiplayer (dare I say) even better than the first instalment. That isn’t the only upgrade though, no sir, as there are also advancements in other departments of this game. The most notable tune-up seems to be in regards to the flow of the game and how the difficulty ramps up after going through sections in the story.

Progression has always been important in games, but in Overcooked 2!, the ongoing challenge is what gives this title its kick. It has the ability to go from “well this isn’t that bad” to “what happened?! What happened!?!” in a blink of an eye. The bonus is, that challenge is what drives you to make it through the story and learn the recipes. Of course, there are also rewards that come along with completing the tasks at hand, but it’s more the sense of achievement that makes it all worth it in the end. Think of it like a job well done after a hard day’s work, except the job is virtual cooking. 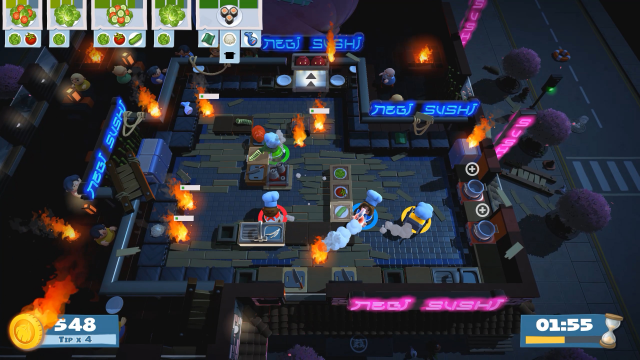 Now, going back a bit, I’d like to talk a bit about the story of Overcooked 2! Long story short, I would have to say that this is the weakest part of this game’s… well, game. This is all, unfortunately, due to the title’s writing. So get this, you’re in the Onion Kingdom right, and the Onion King has decided to try and put together an ancient recipe. Although he succeeds in doing this, he also raises (and bear with me here) the Unbread… the Unbread... Listen, I like making terrible puns as much as the next writer, but the effect of this type of comedy is so groan-inducing that it legitimately almost took me out of the game. I’m not some stick in the mud however, there were a couple of lines here and there that made me chuckle so there is some decent comedic storytelling going on.

So with progression and story having been discussed, let’s move to gameplay. Right off the bat, you notice that there is a certain amount of skill required to actually get good scores in Overcooked 2! The good news is, you can sort of fumble your way to a win if you really need to, but if you want to start getting some real points, then practice makes perfect. This is definitely one of my favourite aspects of the title as it requires that you know how to play the game, something that games seem to forget sometimes with their overdrawn tutorial levels. Other than that, there’s not much to say about, it’s pretty solid through and through. Switching back and forth between characters in single-player is a bit rough starting off, but you eventually get the hang of it. 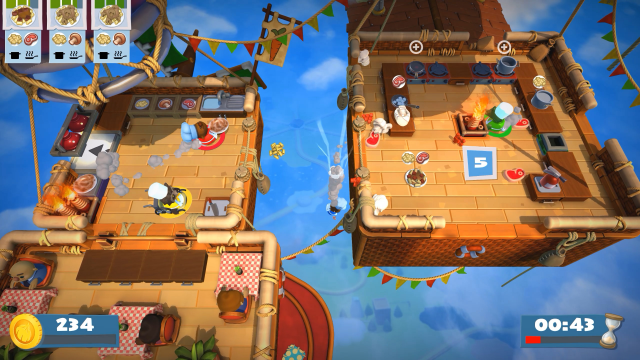 The last thing I’d like to bring up is the wonderfully cartoony visuals on display. This is a game that just looks good, there’s no other real way of saying it. The food, the characters, the food, the locations, the food, the world map, everything is so finely detailed and interesting to look at. Even if you don’t buy it, take a look at some screenshots, you won’t regret it.

So, with all that taken into account, is Overcooked 2! worth the purchase? I would say it is, for sure. The story and writing may be a bit over-the-top and punny for my liking, but there are certainly people out there that will have some fun with it. Those aspects aside, the challenge, the cooperation, the solo experience, and the look of the game itself are all positives working in this title’s favour. So whether you’re a cook for the ages or a master of the macaroni and cheese, Overcooked 2! is worth picking up.

Is Overcooked 2! worth the purchase? I would say it is, for sure. The story and writing may be a bit over-the-top and punny for my liking, but there are certainly people out there that will have some fun with it. So whether you’re a cook for the ages or a master of the macaroni and cheese, Overcooked 2! is certainly worth picking up. 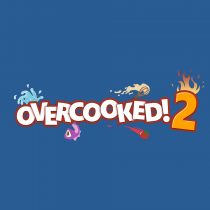