Paradise Killer was simultaneously what I expected and also completely not at all what I’d guessed it would be.

Developed largely by the two man band that is Kaizen Game Works and published by Fellow Traveller, Paradise Killer is an open-world, first person investigation game with a shot of visual novel elements put into the mix. Set on the 24th iteration of a synthetic island, you take the eyes of Lady Love Dies, an exiled investigator who is brought in after an awful murder occurs. You must question the immortal inhabitants of the island and collect evidence to create a clear picture of events. 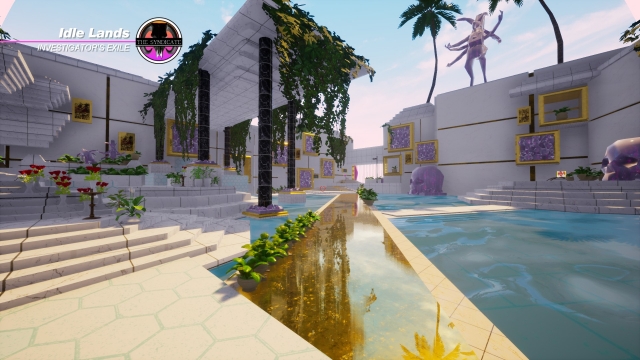 Having only read the plot summation and wanting to go in as blind as possible, I’d initially pegged the game as being a pure visual novel, with perhaps a menu to select locations to visit at different times. Absolutely not. The game is a fully fledged island that you can traverse on-foot, teeming with lorebits, secrets and, most importantly, evidence relating to the murder at hand. This is both the game’s greatest strength and its weakness. It feels absolutely amazing to discover things for yourself in this game, especially when almost all of what you find is relevant to the case in some way. It makes you feel like you’ve done your job when you finally settle it all in the court, far more so than how it would have been had you just selected from a series of flavour text prompts. However, the fast travel system is clunky at best. I understand why they wanted to discourage fast travel in a game like this, however, having to both discover the fast travel stations and unlock them with the currency you collect in game (blood crystals) is tedious. Surely discovering the stations should be enough, since by that definition you’d have explored to find them? The fast travel is only really useful towards the end when you know where to look for the final pieces of the case anyway, so why lock it like this? It’s a mystery game: people will naturally want to look around for clues. It feels like insecurity with how much people will want to engage with the world, which is understandable. However, the audience for this game is not the mainstream, and I think most people playing it have enough respect to actually traverse on foot when they feel they need to.

It’s worth noting, as well, that the game can end any time you would like it to. You are presented with the option to start the court case right when you’re introduced to the island when talking to Judge, and ultimately, the case all rides on if you can prove your theory in court anyway. It took me about eight hours to beat the game, and I feel I did a good job of finding out most of what I wanted to know. 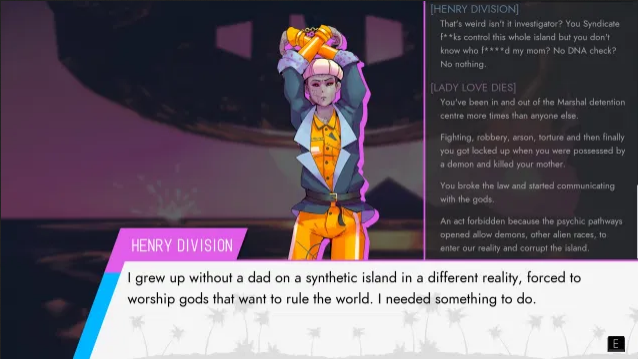 All that aside, one of the strongest elements of the game is the characters. From Crimson Acid, a goat-headed religious idol with secrets to sell, to Doctor Doom Jazz, a smooth talking Scottish doctor and an old flame of Lady Love Die’s, there is an interesting variety of archetypes and designs that all emit a strong sense of the passion Kaizen Game Works had for the game. Each character has their own history, secrets and personal relationships, and this works to make them feel authentic. This is so effective that I actually started to feel bad when presenting some of the islanders’ dirty laundry to them as possible motives. Others, well, I didn’t feel so regretful about. My personal favourite of the bunch was Crimson Acid. For a person who deals in secrets, she’s refreshingly honest and blunt, as well as having a very charming demeanour in general.

There’s a lot to explain with Paradise Killer’s lore and story, and I highly recommend you research it on your own (or play the game!) because I would not be able to do it justice here. There’s alien gods, demons, themes of religious fanaticism, hypocrisy and much more. The best part, however, of Paradise Killer’s story, is that the truth you will find is entirely yours. There is a conspiracy that runs concurrent in all playthroughs, but the truth of who exactly is involved is all up to you and whether you can prove it with evidence. This is such a good decision for the story. Most works that attempt to tackle this type of story will inevitably go for one conclusive truth which breaks the core theme that they’ve constructed, but Paradise Killer commits to the motif and I really respect it for that. It might leave some dissatisfied, but if you pay attention to the ideas that are being communicated, I doubt you’ll come out of the experience feeling that way. 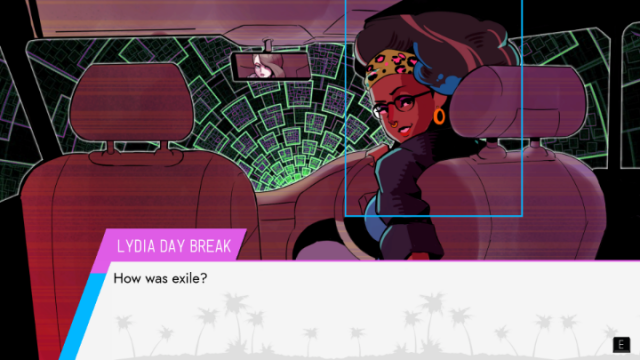 The graphics aren’t the best, but the aesthetic itself is great. For once, I’m not quite sure how to describe it. It’s a strange blend of fantasy, sci-fi and late ‘90s/Y2K motifs with a sprinkle of neo-noir (especially with the periodic whiskey flashbacks). The character designs are excellent and feel very distinct from what I’ve seen before, each having their own silhouette and colour palette separating themselves from one another. The menus are absolutely fantastic, using minimalism in the best way possible, mimicking the sort of old school computer GUI in tandem with the game’s strange cultish iconography to create a very unique look.

The soundtrack was composed by Barry “Epoch” Topping and is phenomenal. It’s exactly what you’d want from a game with this kind of look and feel. It’s both incredibly relaxing and energising, falling into a unique blend between city pop, synthpop and vaporwave that really adds to the game’s atmosphere. Paradise 24 really feels like a Paradise with these tracks playing in the background, and I might just have to buy the soundtrack myself sometime soon. 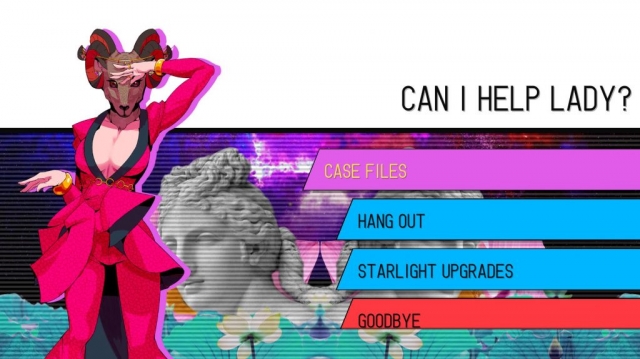 Overall, Paradise Killer was a surprise. It’s such a unique game despite being reminiscent of a lot of different things, and it’s definitely one of the best I’ve played this year. Paradise feels good, even with the dark secrets buried within.

An extremely distinct investigation game with the rare confidence to let you actually be a detective, and a fun groove to boot.