It’s really my week for getting colourful games.

A possibly marooned spacefarer stumbles across an alien desert, before collapsing in front of a cave. Awakening, he finds himself exploring caves and dodging alien robots. 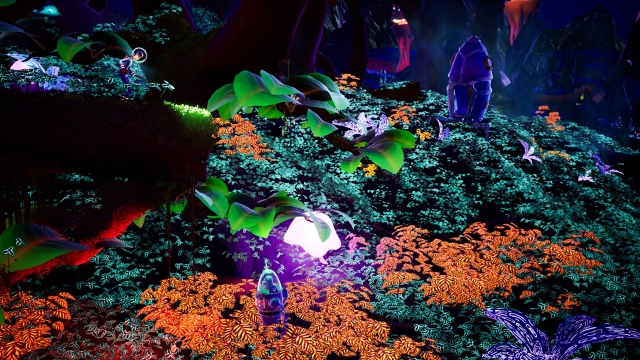 I can’t help but compare the environment and movement system to Playdead’s Inside, but this game is anything but monochrome and grim. The environment is simply stunning and has a serious depth and volume to it, extremely rich in texture and colour. The vivid environment aside, this does have a lot in common with Inside, in that it’s an infinite respawn game, where you just keep coming back until you get the section right, and that there are a number of simple-ish puzzles to negotiate. The puzzles themselves are usually fairly simple, from moving objects to climb up on, to observing patterns of movement in enemies in order to sneak past them. 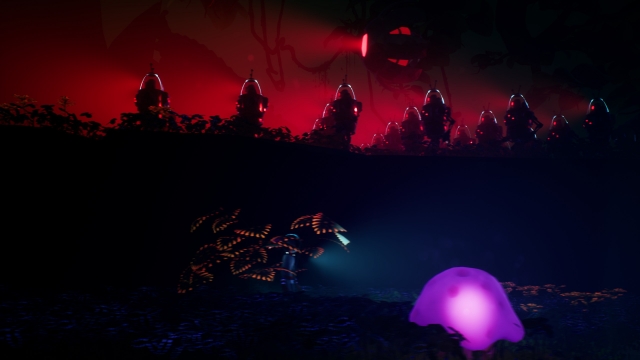 From what I’ve played so far our hero is fleeing murderous robots who have landed on what appears to be a peaceful idyllic planet, full of benign (at first) sauropods, beautiful plants, and stunning alien vistas. It feels only a little cliched in the normal “barbarous looting pillaging aliens (robots) destroy peaceful beautiful nature” way, but still only a little.

A little like Inside, a lot of the gameplay is simply the developer’s gorgeous environment on display while you simply peg it from left to right, sometimes doubling back and up on yourself where possible from area to area. There’s a lot of variety in the locations, and at least once I’ve stumbled (not really, narratively the linear nature of the game presents them to you) across some alien artefacts which have some deeper purpose, which again will hopefully be revealed by the end of the game.

All of the environment is multi-layered in an almost parallax feel, with a real depth going far beyond the foreground through which you travel. A night and day pattern of the environment caught me pleasantly off-guard when it’s changed as I’ve restarted a section after respawning, making me wonder how different the environments I’ve already seen could have been if I’d seen them in the opposite time of day. 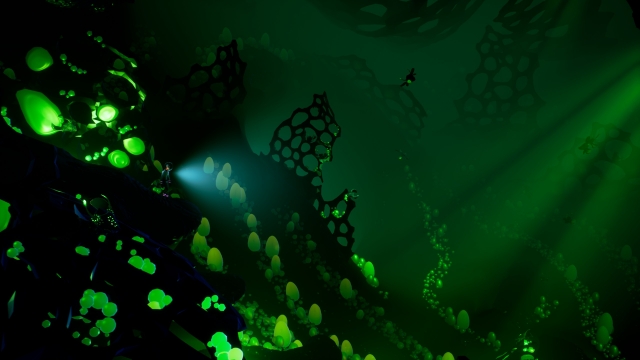 To begin with, I didn’t identify that much with the be-spacesuited hero, there’s not a lot to identify him, and the story neglects to give us any background. On the other hand you’re encouraged to empathise with the environment against the bad guys, and I would hope that when I’ve completed it, there’ll be a nice happy ending pay-off.

It feels a little shallow at first, and linear, and the linearity is almost inescapable, except for some small branching opportunities. As you move through the game, it begins to take on a more epic nature as the story develops, and while still mysterious, allows a more planetary scale to the events unfolding.

Don’t let any of this linearity put you off, so far there’s been very few sections where I’ve felt like I’m just a passenger in the progressing story, and there’s a lot of tense moments when sneaking past patrolling robots or protective bugs in some kind of hive. The infinite respawn mechanic does get frustrating until you work out that detail you’re meant to spot which unlocks the path you need to follow to move onto the next area.

After three hours of my play through, my earlier concerns about the shallow nature have all but been swept away by several sections of particular grandeur. I’ve also developed some affinity with the central character which initially I didn’t feel very attached to. The spaceman is a little anonymous to begin with, but this game is worth investing some time into, regardless of any replay value it might have.

Simply put, it’s colourful and spectacular, well worth the play-time.