Planet Diver is gaming’s equivalent of the central character from The Offspring's hit 1998 single, Pretty Fly (for a White Guy). To quote the band, “Friends say he's trying too hard and he's not quite hip, but in his own mind, he's the, he's the dopest trip”. This is Planet Diver in a nutshell, a game so desperate to stand out, be noticed, and get a pat on the head from critics, it sits at the front of the class, waving its hand frantically, shouting, “Pick me! Oooh, pick me, miss!”.

The premise of Planet Diver is simple: you play as a suited-up space cadet looking to dive through planets through a seemingly everlasting hole, where things like bats, asteroids, and lava flows are lurking. Down makes you speed up, up makes you slow down, and the horizontal arrows move you. This makes it the perfect set-up for an arcade-style game: with the “hole” setting, you have a set up for a potentially endless game in the vein of something like Flappy Bird, and with the obstacles, the game can get progressively harder: a simple yet effective premise. So, why does Planet Diver fall down? 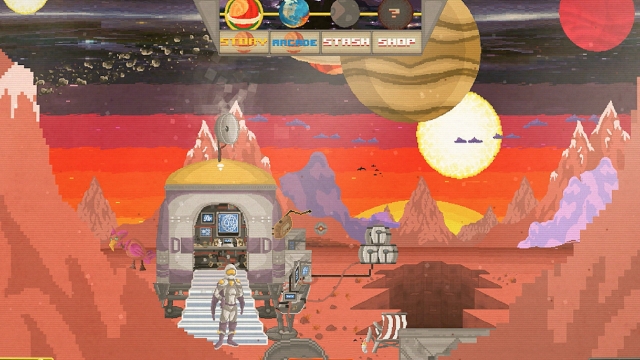 The creative direction of the game is frustrating. The soundtrack is broad, but it tries to take on an old-timey feel, with gramophone scratches and classical instrumentation taken from what feels like the 1940s, giving it a distinctive swing style while also introducing low-lying techno beats and if your head hurts reading all of that, I don't blame you. Planet Diver tries to be a lot of things at once, coupling an old-time aesthetic with the futuristic space background but the combination is like a cocktail made from gin, tomatoes, and asphalt: it's certainly interesting and memorable, but it doesn't go down well. Credit to the dev team for trying to make something interesting, and in fairness, some of the tracks do sit well: the game's main theme is a treat as a standalone unit, but it all feels like a desperate grab at some 9s and 10s from easily impressed reviewers.

I will say this, though: as vapid as the musical direction is, the game does have the decency to look pretty. Done in that “familiar Steam 16-bit style” (can we just call it sixsteam-bit from now on?), Planet Diver features four different planets as backdrops to the action, which look fantastic; this hinges on their expert use of colour where the deep reds, oranges, and yellows in these levels seem to just jump from the screen. 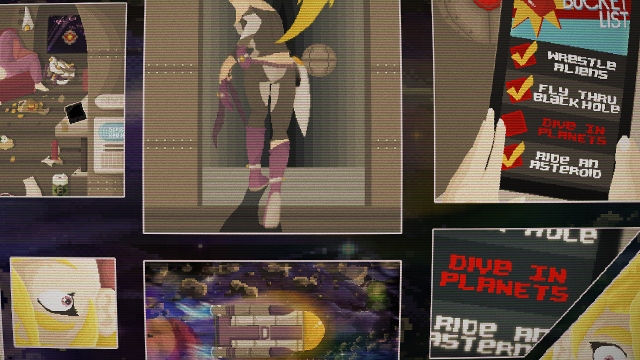 If anything, the unusual presentation of the game is used as a mask for the game's unconvincing gameplay. Planet Diver is a game that insists you go fast; with enemies and hazards like bats and rocks snapping at your heels, you need to evade and dispatch them quickly. This would be fine if the controls, particularly the left and right functions, weren't stiff and sluggish. Now, granted, I'll admit I'm crap at retro arcade games, but after an hour of play, I just couldn't get my character to move fast enough, which makes me suspect it's the game and not me that caused so many crashes into walls, bats, and everything under the sun until I died, again and again. In about an hour's playtime, I finished nine levels, the so-called “easy intro” levels, and I could stomach no more. Planet Diver will leave you wishing the controls were a lot more lithe, which would have helped it out to no end.

The story mode is stupid. There's a lot of story mileage with an idea like “space diver”, but all we get is a lot of frustrating, overwrought tutorials that stretch way too long into the campaign, and insipid 'challenges' like “hug the wall at full speed for 30 seconds for a gold medal”. I realise there might be little you can do in the way of story in the confines of an arcade game, so, here's a brilliant idea: if you can't do a story mode, don't! Just name it a challenge mode and call it a day. 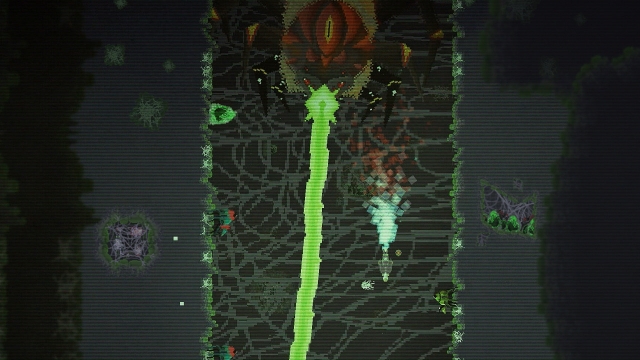 However, what is remarkable is the scope of the game. Let's not get it twisted; Planet Diver's not a good game, but it's loaded with content that indicates that this title really could have been something under different circumstances. During levels in the “story” mode or a run through the arcade mode (just a stripped back, challenge free game mode) you can earn in-game currency which can be used to buy new space suits (purely aesthetic), “mods” which allow different benefits such as higher speed, and new musical tracks, leaving a lot of work to be done to unlock everything. That's a lot of scope for a game that costs around two pounds, but really, considering the miserable experience of playing this game, could you really be bothered?

If this game was a human, I'd punch it in its stupid face for being literally so insufferable and pleased with itself. There's nothing to be pleased about: this is a game that tries to be too much and ends up giving so little. I had very few pleasant moments playing this game; about 80% of it was a lesson in total frustration. I like when a game kicks my ass. I like knowing if I'm losing at a game, it's my fault, and not the game. Planet Diver is not one of those games, and as such, what results is a game so frustratingly put together on every level – with its stupid, peacocking, “look at me” design style that adds nothing, and its woefully insubstantial core gameplay mired by bad controls and the impression that the game is thinking it's cooler than it really is makes for one contemptible game. The only place that this game should be diving into is a bargain bin.

Frustrating, and flamboyant in all the wrong ways, Planet Diver is a total miss. Though, if the developers were looking to actively make a crap game, then they couldn't have planet better.

Writes about videogames. Hopelessly incompetent at making his own, he has settled for criticising others people's games instead

It's a shame this wasn't fun, it looks like it should be so much better :(