Fun is something I’m a great advocate of. I’ve written letters to gaming publications arguing that it is, in fact, the only thing we have left in gaming that defines the medium. PopCap, a studio famous for its flamboyant use of colour and audio, are not shy to the concept of fun. For a studio that got big off the back of very casual mobile games, Garden Warfare is a fantastic attempt to merge all the enjoyment of competitive shooters with a more laid-back experience.

A breath of fresh air is not what I expected when playing this game for the first time. Just the simple use of bold, vibrant colours is enough to make this game stand out from the pack. Every character from the series is represented excellently in 3D, a feat which some 2D games don’t always manage to pull off. The use of funny cutscenes to introduce each new power is also a lovely little addition to the game, showing the amount of love and attention PopCap puts into its games.

Charm was something I constantly felt oozing from every orifice of the game. Whether it be the little backwards somersault that your characters do upon spawning in, the taunts you can assign to the d-pad or the sticker packs that unlock new cosmetic items and characters, the game never stopped making me smile. 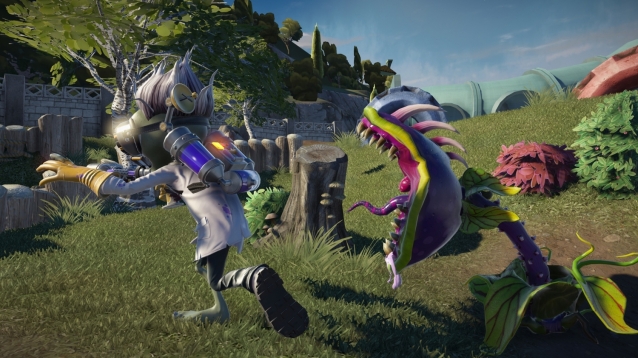 On the subject of sticker packs, other games should take note: this is how you get people to want to collect and unlock everything in your game and care about it. The attention to detail with the, what I can only imagine is, hundreds of unlockables had me coming back to open packs again and again. It may be the nostalgia of having several completed sticker books from my younger years, but this compulsion to buy and ultimately collect all the stickers, unlock all the characters and collectables is one that fits right in with the series. The randomness of it all is what keeps it exciting and something I wish more games had, rather than a linear progression system.

Once you’re done drinking in the sights and sounds of this wonderfully detailed title, you'll maybe want to get round to playing it. So, with its sights set on a more arcadey playstyle, Garden Warfare doesn’t have difficult mechanics to grasp. Movement is simple and shooting is easy. Each class gains three abilities as you level them up, with each set to its own button and which allows complete choice in how you want to play. The classes themselves are also very different: apart from being very visually individual, they all have a unique style gameplay wise.

The four classes for the Plants are: the Peashooter that shoots peas (funnily enough) that have a splash damage on them; the Cactus that is a long range attacker that shoots spikes and also has a garlic drone; the Sunflower that is a healer and does less damage with its main attack and finally the Chomper that is a close range melee class that has a one hit kill attack, if performed carefully. The zombies on the other hand have a very generic Foot Soldier that wields an assault rifle and a ‘ZPG’; the Engineer who can deploy a drone similar to the Cactus but also has a concrete launcher; the Scientist who carries a shotgun and heals and the All-Star who is a heavy class with a heavy football launcher.

All the classes are hugely satisfying to play and just all round enjoyable. There is only one thing that causes a nagging feeling: no melee attacks. This is a feature I was constantly wishing for when coming face-to-face with enemies and having our standoffs turn into who can fire their weapon fastest to deplete the other’s health. The Chomper shows the potential of this sort of play from its extremely satisfying one hit kill if you manage to get behind or underneath your enemy.

The modes are not hugely different from anything you’ll find in any other shooter. Team Vanquish is a Team Deathmatch game, Gardens and Graveyards is very similar to the Rush gametype from the Battlefield series and there is also the Garden Ops mode which is your basic horde mode. None of the modes are particularly amazing: Garden Ops has its moments on its boss waves and Gardens and Graveyards is where the main chunk of the game is at. Vanquish feels a little too aimed at younger people trying to get into games, but that’s not a bad thing, just not for me.

There is very little else to say about the game. The maps are all well designed and suitably colourful and the gameplay is fun but not particularly deep. Fun is the core concept here and it achieves that with what appears to be very little effort. After the release or announcements of several high profile EA games, there have been different artwork showing a Plants vs Zombies version of the game such as Need for Seed and The Grims. This got me thinking, it’s something that could work pretty much anywhere. So what’s next? A Plants vs Zombies RPG? PvZ Racing? PvZ farming sim? Who knows, but I’m pretty sure it would work.

Overall, Garden Warfare is a game that takes the core strengths of shooters and makes them accessible to all. Its presentation is fantastic and infects the game with charm at every turn. If you’re looking for a fun time, PopCap gives it to you in spades. By ratcheting up the fun and lowering the seriousness, Garden Warfare gives its players what everyone wants from a video game: A good time.

Plants vs. Zombies: Garden Warfare (Reviewed on Xbox One)

Overall Garden Warfare is a game that takes the core strengths of shooters and makes them accessible to all. Its presentation is fantastic and infects the game with charm at every turn. If you’re looking for a fun time, PopCap gives it to you in spades. By ratcheting up the fun and lowering the seriousness, Garden Warfare gives its players what everyone wants from a video game: A good time.

Plants vs. Zombies Garden Warfare - Legends of the Lawn Trailer