I’ve played Pokémon from practically the beginning, as I’ve recently written about. One of the titles I thoroughly enjoyed was Pokémon Ruby on my brand new Game Boy Advance. Pokémon Gold & Silver introduced time as a factor - with night and day Pokémon - but even with the ‘colour’ graphics they were scum compared to how wonderful Ruby looked. Even the game cart was a sight to behold… Of course, that last part wasn’t done with Pokémon Omega Ruby…

As with all past games, you start off waking up and answering questions of name and gender. Except in a meta twist, your character happens to be actually playing Pokémon Ruby whilst riding in the back of a moving truck. You get out and are sent upstairs to set the new clock in your room - this was how Ruby knew what time of day it was. And could be tricked into letting you catch night Pokémon at breakfast time. However, apart from the graphical update and new control system, this was the biggest change. Already having an internal clock - in the 2DS - meant it gave no option to change the time.

From there, you’re sent off to find your neighbour and say hi - whom you then save the life of and get a free Pokémon. Professor Birch - that man - is a friend of your dad. Your dad is the gym leader in a town which is almost too far to consider commuting to everyday, given you’re attacked by wild animals every time you go near long grass. But you head off to see him, and presumably ask why he wanted you and your mother to live far away from his office. 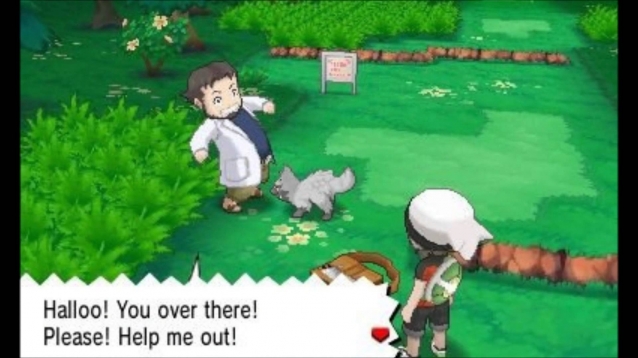 You meet May, who is your rival (or Brendan if you’re playing as a girl), beat up a lot of wild Pokémon and steal money from other trainers on your way to see your dad. Again, he literally runs the Pokémon gym in another town, yet never thought to give his pre-pubescent child a Pokémon. Children own and train them - but not Leader Norman’s kid! What’s more, he won’t even think of letting you challenge him to a match until you already have four badges! So off you toddle.

What follows is about 40 hours worth of rushed through Pokémon battling to save the world - or closer to 60 if you want to explore and try everything out. I was unable to finish the storyline in the ~20 hours I was able to play the game for, which means I missed out on the much-touted Delta Episode which takes place after the credits. But I did get to experience much of the packed world. As you travel, you come up against Team Magma (in Alpha Sapphire you encounter Team Aqua) as they seek to awaken an ancient Pokémon with a powerful evolution. A primal evolution - which is different from mega evolutions - which are different from normal evolutions. I’ll explain in a moment… So you’re going around collecting gym badges to prove yourself and as a side quest-turned-extra-main quest you have to save the world. If you fail, the oceans will be dried up and turned into land (the opposite will occur in Alpha Sapphire).

While you’re out and about, you do some fetch quests to progress the story. One involves meeting Steven who eventually gives you a bracelet that helps you mega evolve certain Pokémon who are holding specific stones. Only two Pokémon have primal evolutions - Groudon and Kyogre from each title - but several different Pokémon can mega evolve. This gives them a temporary stat boost and can be used in every fight so long as the Pokémon holds the stone and not another object, and is happy with you. This is made easy by the fact that everything in Pokémon Omega Ruby is easy.

Near the start of the game you’re given a PokéNav Plus - basically a smartphone. After several people give you upgrades, you can watch a rotating broadcast of yours and others exploits (thanks to StreetPass) on BuzzNav, check the area for Pokémon with DexNav and train outside of battle/play with your Pokémon/connect to other players using PlayNav.

Using the Super Training, you can raise the base stats of your Pokémon quite rapidly. You play a points-based minigame using footballs to gain punching bags, then wander around Hoenn with the Pokémon hitting the bag once per minute on the bottom screen. Or do it faster by tapping on the bottom screen, still able to walk around if your fingers are limber enough. This, coupled with the Exp Share you acquire very early on, means your lead Pokémon can be relied upon for pretty much the entire game. For a change, Exp Share gives XP to every Pokémon on your party. After training until it told me it wouldn’t make a difference, I found that I was only changing Pokémon in battle either by accident, to try and catch a low level Pokémon or just for a change. Even against water-types, my Blaziken was kicking butt with no problems - due to the fact it was a clear 8 levels higher than 4 other of my long-term party Pokémon. I got a Timburr via Wonder Trade early on, which meant it leveled up fast by default…

However, that was my only gripe for the single player aspect of the game. Using the Player Search System, I set up a match online, with my level ~20 party. It pitted me against a Japanese player with a party full of level 50 Pokémon. Needless to say, the 3v3 match ended in three moves, as I would find similar fights to go during the single player.

One of the things I never got a chance to try was going to another player’s Secret Base. At one point you’re shown how to create one, which you can then furnish however you like. It’s basically a clubhouse for you and your friends, though I’ve heard of some using them as miniature gyms. Cushions, plushies, tables chairs… Everything you might want to place in your very own Pokémon-themed base is available at the outdoor market in Slateport or the Lillycove department store. Or can be given to you at random if you walk around with your PokéNav Plus set to Pokémon Amie mode - where other Pokémon come visit your chosen Pokémon’s room (I assume their Pokéball) and they chat. The graphics are very good. From the little display of the Pokémon Amie, to the overworld and the cutscenes, they are very crisp and clear. Pokémon Coliseum is the closest RPG match I can think of, to another game that looks this good while still being cartoony. As the 2DS has the Circle Pad (thumbstick), Game Freak finally took the opportunity to allow players to *gasp* move diagonally. This adds to the ease of the game, as you can skirt the grass rather than make 2-3 steps just to get through one patch - thus minimising wild Pokémon encounters.

Most of the locations will be familiar to those who played the original Ruby or Sapphire, though some have been completely redesigned such as Mauville. However the music is very familiar, and still suits each location and battle well. However, the one thing still lacking is the thing the anime is famous for - no Pokémon says its name. I had hoped that would make the move over by now, rather than the still various growls and roars.

The final point I want to bring up is catching Pokémon. Sadly this is one thing Game Freak haven’t made easier - there’s no ‘Hold A while pressing Down and Start’ or anything to ensure capture - but they have made it more fun. As well as being able to move diagonally, you can move slowly. If you creep towards a rustling bit of grass (which your DexNav can identify if you’ve seen it before), you will fight a Pokémon with different stats and moves than a regular one. You might get one with a single powerful move, you could get one with no attacking moves at all - but four support moves. In the past, rustling grass was very rare and sometimes meant a shiny (differently coloured) Pokémon. In Omega & Alpha, it happens constantly - though I still never encountered a shiny…

With its new features, Omega Ruby puts me in good spirits for what the next generation of Pokémon games will bring. It may be easier than past titles, but there are ways to make it a little more difficult if you prefer. A solid entry into the franchise.

With its new features, Omega Ruby puts me in good spirits for what the next generation of Pokémon games will bring. It may be easier than past titles, but there are ways to make it a little more difficult if you prefer. A solid entry into the franchise.

Get Celebi for Free in Pokémon for Three Weeks, More to Come