2016 was a big year for politics: between Britain’s EU referendum, the coup d’état in Turkey and the American presidential election, it’s been a year of splitting opinions. It only seemed appropriate to play a game about campaigning in Squeaky Wheel’s Political Animals - a colourful turn based strategy game where you play as an animal politician - and in a slight twist of irony I think this game will be quite divisive.

Political Animals feels a lot like a smaller Civilization: you control the entire campaign which consists of the candidate and three staff, and each unit has a variety of shared actions and one unique action. Each unit can move from one district to another once per turn, with the districts taking the place of the hex grids. Squeaky Wheel has taken the multiple endings a Civ campaign would have and dropped them, keeping the different approaches but having everything lead to a timed ending.

This endgame is to become elected, and you do this by controlling the majority of the votes which you get by performing actions in the different districts. When you control the majority of votes in a district it becomes controlled, though this doesn’t seem to do much for the player outside of peace of mind and there are several ways to lose votes. Each district has a set number of voters and the majority of them are undecided at the start of the game, with the exceptions of the two starting districts which are automatically fully committed to their candidate. 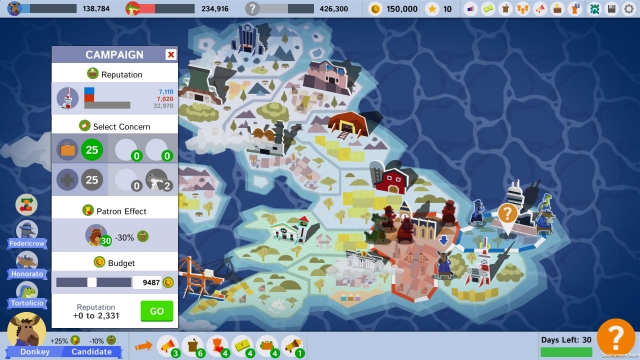 For some reason, they decided to add in Logistics, which is effectively a stamina system. Each action takes a certain amount of Logistics points, but you don’t get enough for every unit to perform an action, especially when performing special actions. This frustrates me somewhat because it doesn’t make sense to me - I understand the need to limit player actions but each unit can only perform one action per turn anyway. If you want to limit the player performing lots of high cost actions per turn, at the very least allow each unit to perform an action.

The political landscape has always been littered with controversy and those make their way into Political Animals too as Scandals. Scandals only affect the specific district they exist in, and if discovered can make voters return to undecided, and negatively affect influential people who control the district. One of the special abilities can create scandals for your opponent and another will discover them.

Every few turns a random event will occur, giving you a choice between two or three options that have benefits and downsides that affect that district. Usually, these can swing a district’s vote drastically, with one such instance costing me a small amount of money for the majority of a district’s votes that were already promised to the opponent. On the other hand, these can be very underwhelming or even negative and you can’t avoid them at all. This feels very Monopoly and unbalanced, since the opponent seems to get these too. 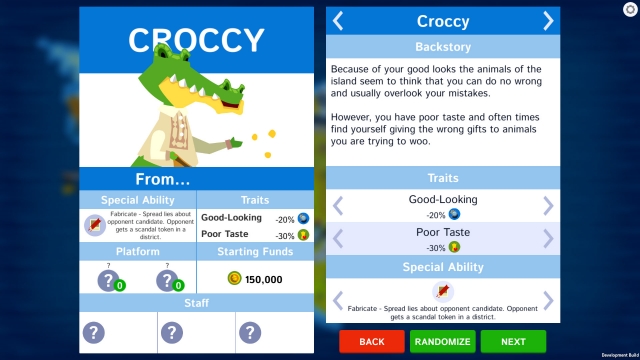 Each unit has the ability to start a rally, a way of focusing district attention towards one of two particular policies. The candidate has two policies that they are championing, and the outcome of campaigns is affected by how much attention the policy has in the district and how knowledgeable the candidate is.

The districts all have three influential people, and you can give gifts to these people to improve your relationship with them. If they are in your favour, you receive a buff to fundraising, Logistic costs, rally and campaigning results, though if they are in the enemies pockets you’ll find yourself going up against a brick wall.

The problem with this system is the cost: everything except fundraising costs money, and the more money you spend the better the result from that action. However, recovering influential people not only normally costs a turn but also a lot of money so I’ve found that ignoring this entirely and letting the AI bankrupt themselves is usually the better option. 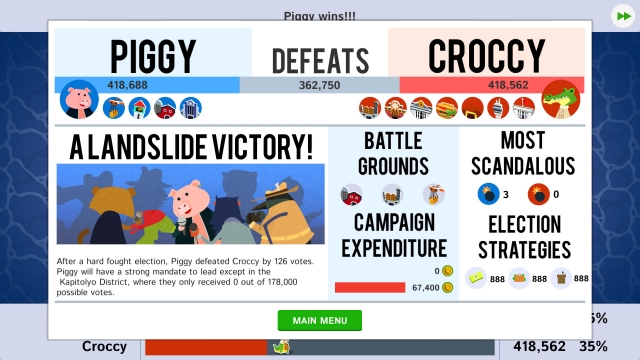 The effectiveness of a rally or a campaign is also a dice roll, with the amount of money being spent raising the result. These can be wide-ranging still, and spending a large portion of your budget to get a very low result is very disappointing. While I understand that this is probably quite accurate, this doesn’t make for a rewarding gaming experience and if this was meant to be a political simulator there are a lot more important ideas missing.

Political Animals is a lovely place to be despite all that, with its strong artstyle and cheery - albeit slightly repetitive - soundtrack carrying the more irksome parts of the game. This is where my earlier suggestion that politics is divisive comes in: there are times where I really enjoyed everything I was doing in Political Animals, really wanting to push on and win the election.Then there are times when I really don’t.

Everything in Political Animals feels slow: it takes around 30-45 minutes to complete a game which is obviously significantly less than the more common turn-based strategy games like Civilization but the turns drag on. It misses the progression that you normally get in strategy games, the drive that makes you want to play just one more turn. In excluding the more complex ideas of the genre, Squeaky Wheel have - for me at least - made a game that I can’t keep invested in.

With a strong artstyle and a clever idea, ultimately the lack of in-depth systems and the huge limitations on the gameplay killed the interest I had in this title.

Political Animals Canvassing on PC and Mac this Autumn