Pro Evolution Soccer 15 was a huge improvement on the series as a whole last year, with a host of new licenses, photorealistic graphics and arguably the best gameplay in a football game to date; it wasn’t surprising to see many fans switch allegiances to Konami's, now one and only AAA series. With all hands on PES’s proverbial ‘deck’, Pro Evolution Soccer 2016 shows no signs of letting up, not only maintaining the quality of last year’s edition, but improving in so many different ways. With that in mind, it’s easy to see why it won so many ‘Best Sports Game’ awards at various conventions around the globe. 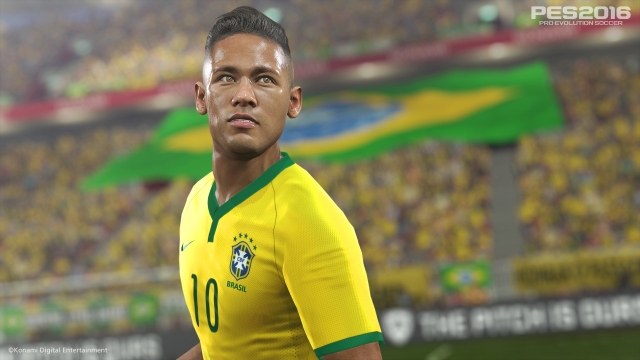 Trying to pin its success down to one factor is an impossible task though. Konami haven’t just thrown all their money and resources into one genre-defining improvement, they have adjusted dozens and dozens of small gameplay features, going through with a fine tooth comb along with knowledge and passion of the beautiful game.

Players collide with real weight and drama, tripping over a leg will warrant a different animation than running head-on to a defender. Ball control is far from the simple skill it appears, unless you’re a Lionel Messi or Sergio Agüero type player, with great balance and a low centre of gravity, dribbling isn’t going to be the angelic dance between defenders it has been. Players react to every little incident on the pitch, a cheer of elation or a ground-thumping tantrum when a decision doesn’t go in their favour. And on the whole, your teammates are the greatest team you have ever been provided with in a football game, closing down balls, making intelligent runs and shutting down counter-attacks. It’s all what anyone looking for a solid recreation of the beautiful game would want in a game, and once you get set-up and take the pitch with your favourite team, it takes you to a whole other level. 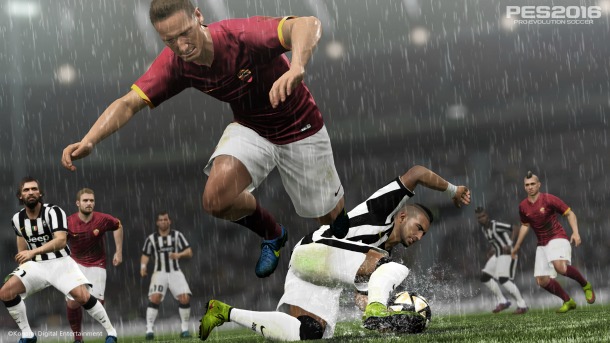 As a Liverpool fan, it’s still disappointing to see my team, as well as a large chunk of English teams, not be officially represented, but that's a problem with the bureaucracy of football licenses, not Konami. It’s almost as if the highly impressive leap in gameplay is a compromise for the lack of licensed teams. When the likes of Daniel Sturridge links seamlessly up with teammate Coutinho at the edge of your opponent’s box, or you see Martin Skrtel winning aerial challenge after aerial challenge, it makes you forget about the fake name, kit and logo and become engrossed in the solid recreation of a Premier League tie.

With that in mind though, Pro Evolution Soccer 2016 comes with an abundance of licenses. Both Serie A and the Bundesliga are well represented, as is La Liga, Eredivisie and a smattering of teams from all corners of the globe. But all of this is shadowed by the official domestic and international tournaments now found in Pro Evolution Soccer 2016. The Champions League returns, as does the Sudamericana, Copa Libertadores and other continental competitions, but the big series is the official UEFA Euro 2016 tournament, featuring all qualifying international teams. And it is in these authentic match day experiences when the cream of PES rises to the top. Dramatic music as the teams walk from the tunnels, kits with the corresponding tournament badges on the arms and the official match day graphics would all lead you to believe you are watching a live match day broadcast. 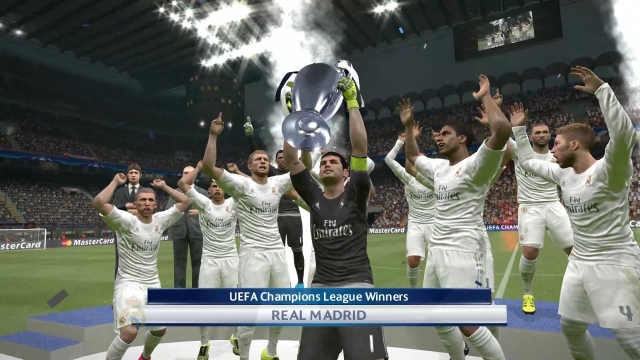 Online mode myClub, essentially Konami’s version of FIFA Ultimate Team, returns this year and has built on last year’s success. Your manager is arguably the most important decision that you’ll make when setting up your club; he brings with him a set formation that you must work with and integrate your players into. After selecting a world class player, who you keep for only a handful of matches, you're roster is automatically completed and can be added to by scouting players. What makes myClub particularly poignant this time around is the host of RPG-like elements added in. As well as your players levelling up based on their performances, improving their individual traits, you earn GP during every match. This is based on everything from scoring a goal, to being a flashy git and nutmegging every player on the pitch; it all mounts up and the more GP you have, the more likely you are to attract top quality to your club. As beautiful as Pro Evolution Soccer 2016 is this year, its menus are still as confusing as they have been. Once again, the classic, user-friendly tiled homepage is hiding a labyrinth of menus and submenus, which during match set-up and in-game pauses, will haunt you and have you scratching your head in confusion. Load times have also increased, albeit down to the huge leap in graphical and in-game prowess, and with each match adding to your overall GP, PES is constantly checking-in with servers, which can really disrupt your play when you fancy a quick match.

There’s no denying PES’ quality this time around. Everything they have said and done makes sense, and the result is the best feeling and most immersive football game to date. It looks like football and it feels like football and that essentially is all that matters. While myClub might not yet be ready to take on FIFA Ultimate Team, it’s certainly building the foundations. Konami now have all eyes on PES, and EA should be very worried.

PES is the ultimate football game for players. Fans may be scorned by license woes, but if you want to play a high quality football game that looks and plays just like the real thing than look no further.

Konami to Publish the Official Game of Euro 2016