Despite having a title which sounds like it belongs to the more sordid parts of my DVD collection, Raging Justice's nostalgia-driven trip should please fans of classic arcade titles such as Final Fight or Streets of Rage.

There's no mistaking that Raging Justice wears its influences on its sleeve and developer Making Games has taken good care to effectively emulate what is in essence a dying genre. If you think it sounds like Raging Justice doesn't take many steps to modernise the genre then you're correct, the developers have clearly made a game that is targeted towards a specific gamer – for better or worse. 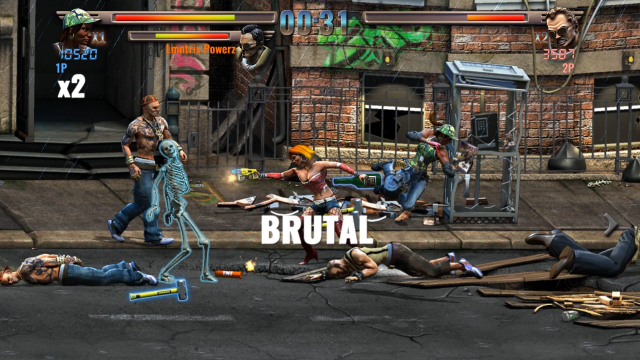 The good news is that Raging Justice is a lot of fun. There's something cathartic about old-school games where your only objective is to punch baddies in the head and rack up a hefty combo. Missions are a straightforward, 2D romp through dilapidated environments during which you must punch and kick your way through, before finally squaring off with one of many bosses.

The story is an equally simple affair. You play as one of three police officers, dispatched into a crime-ridden city to rescue the mayor who has been kidnapped. Though attacks and movements are all the same for each character, playstyles do vary depending on who you pick. For instance, burly man Rick Justice is a no-nonsense, slow moving brute who depends on force rather than finesse. I actually found it quite difficult to rack up combos with Rick due to his brawler-like nature. Nikki Rage on the other hand possesses a swift fighting style through which I was able to rack up combos using her fierce kicks and punches. Either way, the characters don't differ too much and players should gravitate towards the one they simply like the look of. On that point, it would be nice if there were more characters to choose from as it would add replayability to the game, which isn't currently offered due to the available characters' similarities.

That's not to say there isn't any element of depth to the combat. Besides from the standard kick and punch attacks, Raging Justice has players grappling enemies and also provides them with a special move which depletes some of your character's health, adding a bit of strategic depth as when to utilise it best. More so, weapons and even a few vehicles are littered throughout the game, ranging anywhere between bottles, chairs, shotguns and even a lawnmower. On top of this, players can choose to act as the Good Cop or Bad Cop throughout stages. You can do this by arresting warrants when they're appropriately stunned, giving you the mantle of Good Cop and earning you a nice health item. However, failing to arrest a warrant will mark you a Bad Cop and remove that vital health boost, a needed necessity considering Raging Justice's difficulty level. 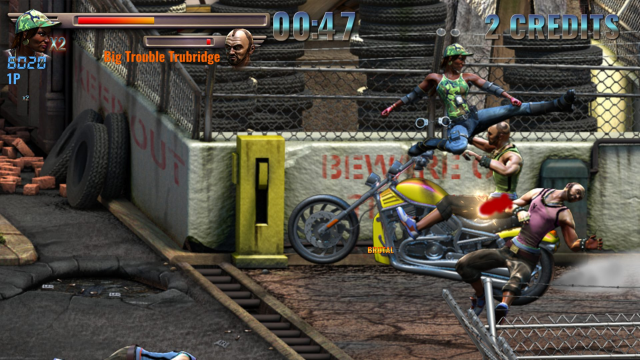 Raging Justice is a tough game, even on the normal difficulty and provides a hefty challenge, not only through its hordes of enemies but also through specific objectives embedded within each mission. For instance, players might be tasked with arresting three warrants or racking up a combo of a certain amount. These challenges are fun and a good feature, but they can be extremely difficult to complete. Part of the reason for this is that, at times, it's difficult to assess which enemy you're hitting, making arrests particularly infuriating to achieve occasionally. On top of this the grapple and arrest button are one in the same and the game often went to grab a different enemy to the one which I wanted to arrest. They're small, infuriating flaws which unfortunately have a big impact.

The bosses too are a mixed bag. Raging Justice works best when you're punching your way through enemies and trying to avoid getting hit. Bosses slow down the pace and a couple even stop you from hitting them all together for brief moments, requiring you to instead fight waves of goons before their health can be depleted. Indeed, there seems to be a lack of tactics to many of the bosses besides from avoid their attacks, which can often be difficult due to it not being obvious where they're going to land.

The visuals will be another point of contention for many players. The 2D environments mixed with the 3D character designs can certainly be off-putting, but by the end of my play through I came to like them. If anything, Raging Justice has a distinct visual style that include sharp and well designed environments.

The campaign should only take you around five hours to complete, but with three difficulties and characters, various mission-specific objectives, online leaderboards, and a Brawl mode in which you fight against endless waves of enemies, the game certainly isn't short on content.

Overall Raging Justice should please fans of the genre and although it doesn't modernise beat 'em ups in any meaningful way, there is still a lot of fun to be had.

Overall Raging Justice should please fans of the genre and although it doesn't modernise beat 'em ups in any meaningful way, there is still a lot of fun to be had.