It was clear that soon as Hotline Miami made headway into the hands of gamers with its fast-paced, twitch-based, gun and melee gameplay amongst a synth wave driven 80/90's backdrop that others would attempt to replicate its frantic, brutal gameplay style. While there have been some attempts, many being blatant clones, Redie is different. Developed by Ruckert Broductions, Redie is a top-down shooter, where you get one life to clear out a room full of enemies. It's simple enough, but that's only at the beginning.

Redie doesn't feature any story as such and there isn't a fancy opening full of backstory or character building, but this is deliberate. What Redie is, is straight up action. It essentially gives you a knife or a starting gun and leaves you to it. Getting yourself killed, which will happen a lot, has you restart by pressing R to Redie. Taking place in either an office building or places of business Redie has you take out army-trained terrorists in one life and as quickly as possible. So from that, not much else can be said about the premise.

With 3D environments and characters being of a blocky design, Redie sets itself apart. With a clean design, the rooms are lit brightly with office lights or colourful interiors. The addition of dynamic lighting, the environments realistically cast shadows across pillars, doorways, and rooms. The physics-based destructible walls and objects scatter the floors from blasts of gunfire and explosions, further emphasises the appealing visuals. 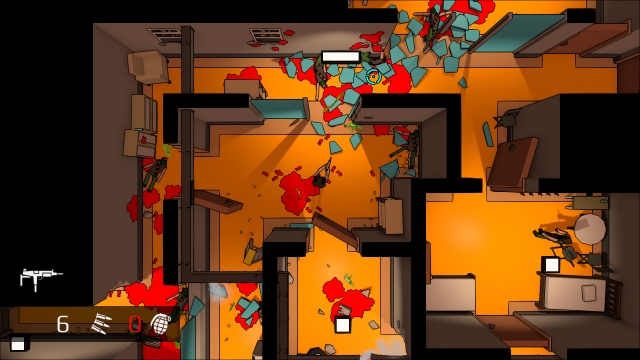 Throughout the course of the missions, you’ll be able to cause mayhem with multiple weapons, and as you cruise through the environments blasting away with shotgun or pistol in hand, you’ll utilise the weaponry in a variety of challenges that have you clear the room only using a knife, pistol or within a set amount of time. They’re not enforced, but are encouraged; so for that added piece of replayability, the challenges are welcomed. The only downside is that they’re not the most difficult to complete.

Just like other repetitive one-life games, after being wasted multiple times and you’ve died twenty times or more, the boredom will start to set in, but just like Hotline Miami, Redie has a passive addiction that lingers. You either quit in rage or leave for such a time that you return with a fresh head and storm through the levels with no trouble. It’s this that makes Redie an enjoyable time-killer.

Unlike Hotline Miami, Redie doesn’t boast an impressive soundtrack but is still a decent attempt. It reminded me of classic arcade shooters, with guitar riffs and techno beats, Redie’s soundtrack is adequate enough to suit the style of gameplay. 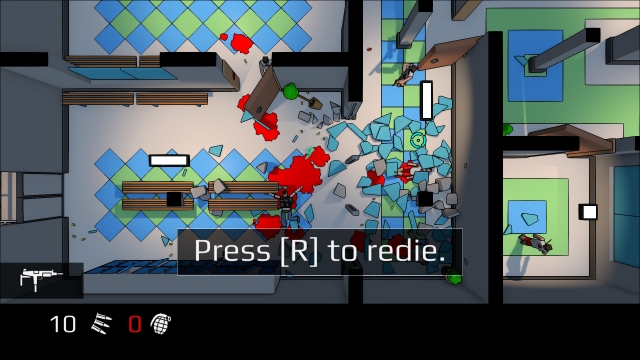 As a whole, Redie is a challenging title. Frustration inducing but by the end becomes rewarding. It certainly catered towards fans of Hotline Miami, it why it caught my attention, but the game itself feels fresh and enjoyable. It isn’t a straight up clone, neither is it an homage, but another action-packed stylish top-down shooter with the same concept.

Redie is a challenging title. Frustration inducing but by the end becomes rewarding. It certainly catered towards fans of Hotline Miami, it why it caught my attention, but the game itself feels fresh and enjoyable. It isn’t a straight up clone, neither is it an homage, but another action-packed stylish top-down shooter with the same concept.