I wasn’t too sure what to expect when I started playing Redneck Ed: Astro Monsters Show on the PC. I had looked at some of the reviews and people had complained about the controls and how it felt broken when you played it. Luckily I never had any of these issues when I played it. When the game starts we see the title character Ed, working as a mechanic when suddenly a young girl comes up and rips the skin off of his face. It sounds a lot more graphic than it looks luckily. She starts running away and Ed chases after her with his handy wrench. You are thrown right into a mini-tutorial as you are in pursuit of the girl, the game teaches you the controls on how to jump, climb up ropes and climb over ledges and jump down. Just as you catch up to the girl, a light surrounds you and transports Ed to an alien planet. 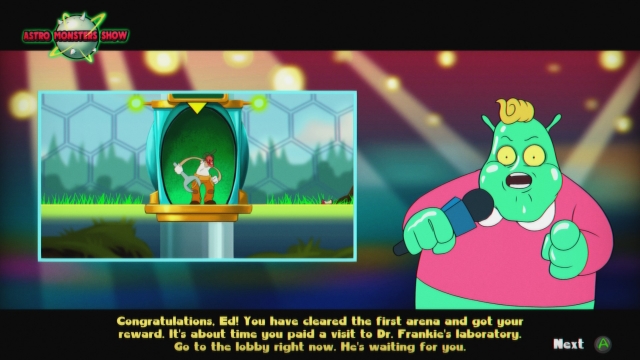 Ed has been chosen to be a contestant for an intergalactic reality show called the Astro Monsters Show. To earn money, glory and your freedom you have to take on other monsters head-to-head in multiple battles and rise up the ranks. Luckily, you get some training on how to spar from an alien named Ap Ming. No one wants to watch a fight with combatants who can’t even spar. Ed learns how to do quick combos, uppercuts and a strong attack using his wrench. You will have to do a mix of all these attacks to be successful in battle. If you try to do only stronger attacks, your opponent will take advantage of your slow speed, so you have to keep this in mind and try to plan out how you want to attack. It takes a few tries to get used to the slightly floaty jumping, though I guess you are in space, so maybe the gravity is a little different than what you would expect. While you battle little thumbs up cards will fly off of your opponents. These are “likes” you receive when you perform combos with your attacks. The likes will be used as currency for Ed to buy upgrades, new attack cards and item cards.

When you die in battle, which I can guarantee you this will happen a lot, you have the choice to retry the last battle again or go back to the lobby. They bring Ed back to life using the genetic material they harvested from him earlier, because if the contestants died a final death, they wouldn’t have much of a show. Each of the fights has multiple challenges to try and complete to get rewards like new cards and stars. Once you beat a stage you can always go back and rechallenge it to try to get more rewards and earn more stars to unlock the other floors and battles. To get to the second floor you will need at least 8 stars, so just doing the bare minimum and fighting each opponent once won’t quite get you there. As you progress new things will become available to you, like the card shop that is owned by a werewolf. He sells item cards like a Heal Burger that will restore some health in battle, a Mirror card that causes enemies to fall over when they see themselves and other random items like Mines and Steroids that can come in useful. The other handy option that will be available is the ability to upgrade your attack cards to make them more powerful. As you explore the different floors in the game you meet some of the other contestants. There is one other contestant named Snot, who is scared and crying. Ed tells him to stop being a crybaby and volunteers to help him through his first fight. It seemed like it would be fun to be teaming up with someone else to defeat the baddies, unfortunately this just ended up being a frustrating babysitting mission. Snot just wandered around not attacking anyone and would just constantly get hit and die, which means you also die. After this experience, I definitely did not mind being a lone wolf and taking on the fights by myself. The game has a really cool look to it, almost like the artwork in the Cuphead game. It’s bright and colourful, with really creative character designs for the aliens you come across. I love seeing a T-rex playing the guitar in the lounge that you visit, he was so cool looking. The soundtrack of the game is really unique and complements the craziness of the story quite well. The soundtrack is also available to purchase if you really enjoy the music. 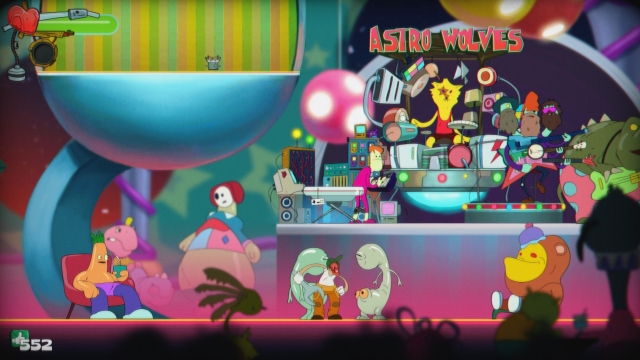 Redneck Ed: Astro Monsters Show is definitely worth trying out if you have a chance. At first, it might be a little frustrating to play, but once you get the combat system down, it’s quite an addictive game. Especially when you are trying to complete all the challenges in the fights to get the rewards and stars to move onto the other floors. If you are looking for a game that will really challenge you, or you want to be a contestant on an intergalactic reality show, Redneck Ed is worth a try.

A challenging battle game that has you fighting head-to-head against aliens in a reality TV show to gain your freedom. It takes a while to get used to how the controls work and feel, but once you do this is a very addictive game.