Remnant: From the Ashes Review

When I was a kid, me and my brother used to try and come up with increasingly odd food combos. I had a ham and jelly diamond pizza, lemonade with vinegar, and even a sandwich with a little bit of everything we had in the cupboard. Except Marmite, I wasn’t touching that with a barge pole. Occasionally this would result in an unexpectedly remarkable combination, like cheese and jam sarnies. Mainly though, it would result in something dreadful, like the strawberry Nesquik powder and coffee coated sausage roll I had that one time. With elements of various different genres blended together, Remnant: from the Ashes takes a very similar approach to this. Is it a perfect harmony of game flavour though, or just a case of too many cooks spoiling the broth?

Straddling the fantasy, horror and post-apocalyptic settings, this is a game that doesn’t want to be pigeonholed. It’s also determined not to fit any one genre, with extra-tough bosses to learn like Dark Souls, third-person loot shooting similar to Destiny, and a dynamically generated co-op campaign. If you forced an AI to play through 1000 hours of videogames, this is probably what it would come up with.

I’m pleased to say that it’s actually a really good mix, and the whole is certainly greater than the sum of the parts. The biggest influence is clearly those Dark Souls style games that punish you for not having cat-like reflexes. This is a particularly hard game. It’s beatable, and if you put the time in, the rewards are plentiful and satisfying, but don’t expect to jump in and beat the game in a few hours. Teaming up with other players certainly helps with this, and it’s a far easier affair in co-op, but that’s no consolation if you find yourself having to play solo due to a lack of time or friends. It’s not impossible to beat the game offline, but the bosses are clearly designed to be taken on with friends or strangers if you want the best experience. The final boss is ridiculous and nearly impossible to solo though so I honestly wouldn’t even recommend trying. 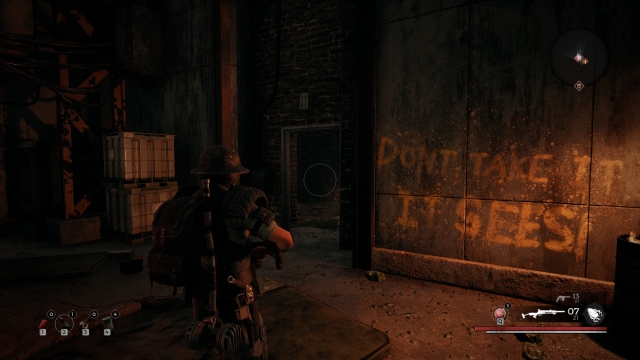 Those bosses are a little bit formulaic for the main part, with most of them simply being a case of throwing adds at you to make it more difficult. The bosses themselves are seldom that hard to beat in isolation, but their cronies make it difficult to get hits in. It’s a bit of a shame, but there are worse issues with a game and it didn’t deter me from trying to find and kill them all.

Visually, this is a stunningly gorgeous game. Whilst starting as a rather bland mix of browns and greys, the world of Remnant: From the Ashes becomes a varied and atmospheric smorgasbord of colour as you progress. The enemy design is incredibly detailed too, not that you’ll have that much time to look at it, lest you get killed by a little spherical thing wielding an axe or a giant demon with scissors (who never runs and always walks toward you slowly and menacing).

Being procedurally generated doesn’t stop Remnant: From the Ashes from having a story and you’ll be sent out on missions for the small band of remaining humans trying to free their world from demonic oppression. It’s probably a little convoluted, but this is a game about the demons of hell killing mankind so you can probably suspend your disbelief for a bit. 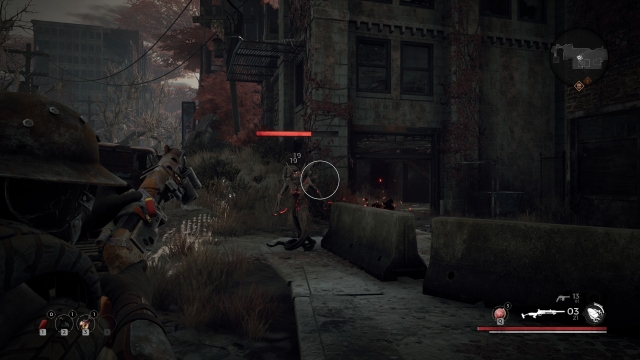 Building your character can be as simple or as complex as you like it, and the game allows you to keep multiple different characters in progress simultaneously to try out different builds and equipment combinations. You’ll also be collecting materials to craft and upgrade weapons, and this game has some amazing weapons in it too. My personal favourite was the gun that fires a swarm of bees, because why wouldn’t you love something like that?

As someone who isn’t a huge fan of the Souls series, doesn’t really like online games that much, and didn’t get round to playing any of the Darksiders games, I didn’t particularly expect to like Remnant: From the Ashes, but in a surprising turn of events, I actually enjoyed it way more than I expected. By taking the best bits of a few different genres, Gunfire Games has come up with an exceptional formula here, and brought us the surprise hit of the year. Sure, it’ll take you a while to “git gud”, but it actually feels like it’s worth the practice. Remnant: From the Ashes (Reviewed on Windows)

By taking the best bits of a few different genres, Gunfire Games has come up with an exceptional formula here, and brought us the surprise hit of the year. Sure, it’ll take you a while to “git gud”, but it actually feels like it’s worth the practice.

Remnant: From the Ashes Review

Remnant: From the Ashes gamescom 2018 Screenshots

Remnant: From the Ashes