The puzzle levels revolve around a special type of square: a blue square which instantly kills you if you roll over it. These can be disarmed by blue pellets that exist throughout the level, though all of this is reset when you touch a checkpoint. More than one of the levels required you to pixel-perfect miss a checkpoint to pass sections, which is infuriating because it goes against everything I’ve learnt as a gamer. 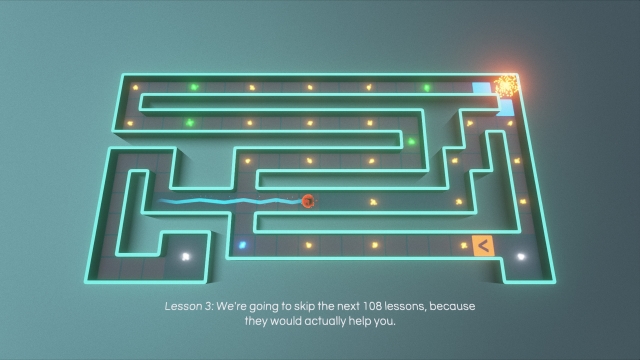 The speed levels are the hardest, and usually involve making extremely precise movements in very little time. A couple feature a big red ball chasing you throughout the level - collision is instant death naturally. All of the levels feature a much higher number of deaths on my save file, mainly because I panic and jump off the levels instead of getting squashed by a giant rolling ball.

The rhythm levels make use of the excellent soundtrack and the main obstacles of the piece: red glowing squares. When lit, these burn your health away, and the rhythm levels will have them flash in time to the music. These are actually surprisingly easy levels - for me at least - since once you have the pattern it takes a big mistake to mess up the level. That, or the level decides to mess with you.

As previously mentioned, Road to Ballhalla is narrated by sarcastic text which likes to mess with you. In the very first part of the tutorial, it shows it’s true colours by telling you to avoid the red laser, then immediately exploding you with said red laser with a sassy message. This is unavoidable if you want to continue, and it sets a tone that is continued throughout the game. It’s hard to discern when to trust the text, for sometimes it is trolling you and other times it is saving your time. 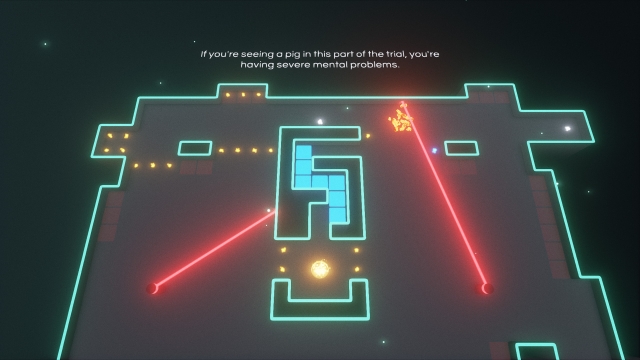 It's less a pig, more an angular Ditto

Each level has two sets of additional objectives which reward you with stars at the end: the first is number of deaths per level (less than two is usually enough for full stars) and the second is a collectible count. Each level has Pacman-style pellets that you can collect, and collecting all of them rewards you with all the stars, though some of them can be very hard to reach.

There is also a map editor that launches separately from the game, and Steam Workshop support. There are already some very good levels that have certainly added many hours of additional gameplay, and the creator tools are very easy to use but feel like the tool that the developers used to make the actual game levels.

I enjoyed my time with Road to Ballhalla, but I think it’s very flawed: The levels are grouped into chapters, but the level could be any of the three types. This makes the game’s difficulty very inconsistent, and you can go from level to level without any real sense of achievement or improvement. Coupled with an inability to skip levels, I found myself stuck on some levels for a long time and getting very frustrated at the game after breezing through the previous level.

Road to Ballhalla (Reviewed on Windows)

Road to Ballhalla is a lot of fun, with a great visual style and soundtrack, let down by a unenjoyable difficulty level.

Road to Ballhalla Rolls Out Soon