Rollers of the Realm Review

There are some things in life you wouldn’t expect to combine well, yet despite every instinct telling you they just shouldn’t work, they do: Sid Vicious and Frank Sinatra, whisky and beer, pineapple and pizza. Now indie developer Phantom Compass i mixing together an unusual combination in the hope it produces gold rather than garbage: pinball and RPGs.

Rollers of the Realm’s intro begins with a tale of ancient times, three warriors and a land currently at war. If I didn’t already know I was playing a pinball game I would be expecting a character creation screen at this point. It really does sell itself as a full on RPG, right up to where the actual pinball begins. Roller’s hand-drawn style does give it a certain charm, though, much like its voice acting, it can be a bit hit and miss. Graphically I thought it bore quite a similarity to some of The Settlers games. Maybe it was the cartoonish characters, medieval world setting and viewing angles that made me think of the RTS classic. This was in no means a bad thing, in fact it worked well in the context of the game.

The way the RPG elements are integrated into pinball mechanics is quite clever. Simply put, each character you have in your party is represented by a ball you can use in the game, the idea being you can swap balls mid-play in order to utilise their individual skills and attributes. Need some guards or scenery taken down? Use the large, high damage ‘knight’ ball. Want to reach that secret entrance? Select the small, high agility ‘rogue’ ball. Once you collect enough mana by hitting certain sections of a play zone, a character’s special move can be activated. These include calling on multi-balls, temporarily buffing your damage output and so on. It’s a great concept and the designers should be applauded for coming up with something so different, but does it work in execution? Well, most of the time, but it does have some issues. In pinball games the make or break factor is often based on two things: ball physics and interesting tables, two thing Rollers of the Realm doesn’t always get right. The pinballs just don’t feel like they should and their movements seem a bit unnatural at times. You also have the ability to control them slightly with the joystick while in play, I took this to be a kind of tilt function, though the board never locks up through overuse as in most pinball games. This movement range varies depending on the character’s agility stat; the higher it is, the greater the movement you can apply. With some sections not even containing flippers, there were times it felt more like one of those toys where you have to guide a ball through a maze by tilting the board on its axis.

As for RotR’s tables themselves, they don’t have many hidden features or multipliers, something you would normally expect in abundance from a pinball game. Barring the final level, there’s not a huge amount of variation either. Each table tends to consist of firstly performing some required action - during which time you can’t die - then battling the enemy, where death is possible. The last level does differ from most of the others, requiring the use of several different characters to succeed, but it shoots itself in the foot by being frustratingly difficult. So much so that a patch is being implemented to make this final boss battle a bit easier. It’s a shame more of the levels didn’t include this required character swapping, most of the time I felt I was relying too much on my knight to get my through. In between levels you can visit the port and upgrade your attributes with the gold you have earned. You even have the option to buy new characters/balls, though I would have appreciated knowing exactly what each one was capable of, rather than having to just guess what their talents were, based on their occupations and a brief chat.

Overall the game is quite enjoyable to play, though more a distraction than anything else. It did have a bit of the RPG addiction factor of wanting to upgrade characters then seeing what effect this had on them, though the improvements were often too subtle to notice. Figuring out some of the puzzle elements on certain tables was fun, while the occasional parts that required multiple characters to progress were my favourite sections of the game. As you advance through the short story campaign, arena mode will open up. This gives you several challenge tables, each with an online leaderboard. The gold you earn here can be taken into the main game, though for some reason you only get a small percentage of it, which made this mode a bit pointless for me.

Rollers of the Realm isn’t bad, though it’s certainly not great either. I could see it being more suited to tablets than anything else. If you quite like pinball and RPGs, as I do, then you’ll probably find it gives you a fairly entertaining seven hours play. The low price tag also bumps the score up, especially as you’re likely to feel the compulsion to finish its story mode. 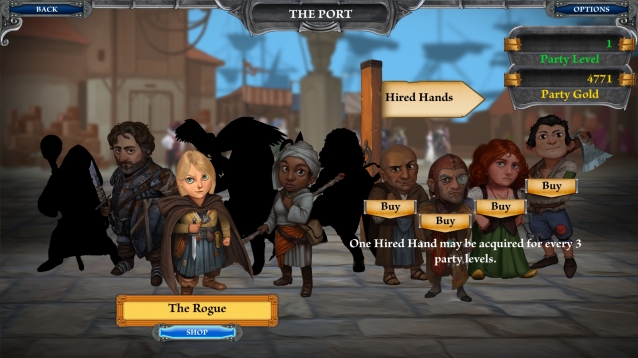 Rather than combining the two genres into a perfect blend, Phantom Compass has diluted both before mixing them conservatively. Rollers of the Realm is more gin and tonic than anything else: refreshing, quite enjoyable for the short time it lasts, yet some will find it’s not to their tastes. It may not be a perfect amalgamation of Pinball FX 2 and Dragon Age, but RotR is still an above average game with a unique concept and good value for money.

Rollers of the Realm (Reviewed on Windows)

Rather than combining the two genres into a perfect blend, Phantom Compass has diluted both before mixing them conservatively. Rollers of the Realm is more gin and tonic than anything else: refreshing, quite enjoyable for the short time it lasts, yet some will find it’s not to their tastes. It may not be a perfect amalgamation of Pinball FX 2 and Dragon Age, but RotR is still an above average game with a unique concept and good value for money.

Rollers of the Realm