Room to Grow. There's a lot to unpack with the name of Mischka Kamener's plant-centric, puzzle game. On one hand, it’s just a straightforward description: the game, after all, puts players in control of a cactus which, in a manner somewhat reminiscent of the Nokia classic Snake, extends to fill up the grid-based space available to it. The start of each level presents a shaped grid and three basic elements: the player-controlled cactus, the ‘objective’ cactus (or multiple cacti) and a goal. By extending turn by turn in any of three directions—going back on oneself is impossible—the player must nudge the ‘objective’ cacti into the goal. Simple, right? Not exactly. 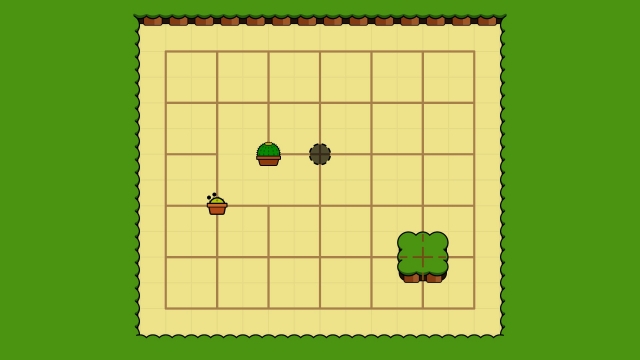 You see, as well as being a basic description, the title Room to Grow carries some traces of irony in how it contrasts the lack of… well, room to grow for its central cactus character. Many of its fiendishly difficult challenges offer exceptionally limited grid space with which to manoeuvre. Once the player has extended their cactus form, there is no retracting it, meaning that each move has the potential to prevent future ones. More often than not, the player is the greatest obstacle standing in the way of their own success. In some situations, the player can move their entire cactus ‘structure’ by pushing up against the edge of the grid (think moving around in an office chair by pushing against a desk). While this is often necessary to create space, it also serves to increase the cactus’ size further, increasing the likelihood that the player will inadvertently grow themselves into a dead-end.

As a puzzler, Room to Grow is so delightfully simple, in both its premise and cartoon art style, that the challenge waiting to pounce just a few levels in might come as a surprise to some. It doesn’t take long to run head-first into a brick wall of progress, where every direction available to the game’s snake-like cactus seems bound for failure. Thankfully, there’s an ‘undo’ feature for these very situations, as well as a ‘skip level’ feature for those times when a brand-new challenge is what’s needed to get the old mental cogs shifting. Using either one of these has no negative impact on a player’s profile, no ‘black mark’ signifying that they required a helping hand. After all, most players will eventually need that consequence-free ‘undo’ feature, and the ‘skip level’ option gives the game a puzzle book kind of appeal, where the player is free to tackle the game’s challenges in an order which suits them. Treating the game like this helps to negate the frustration of spending, say, half an hour on a single puzzle, a situation which is well within the realm of possibility. 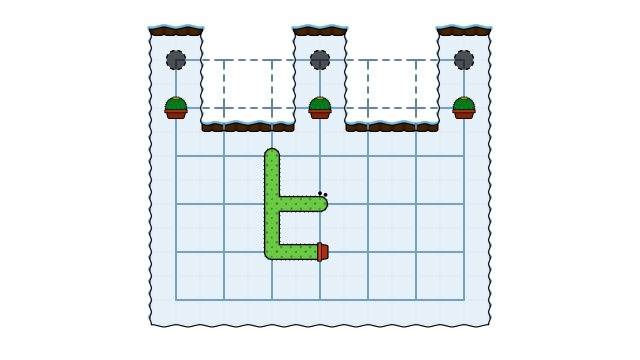 Returning to the depth of meaning found in the game’s name, Room to Grow could also refer to the wealth of mechanics which expand upon its oh-so pure premise. As players venture through the game’s levels, spanning grassland, tundra and desert, they’ll be introduced to new mechanics which add yet more layers of complexity. These include objectives which sit off-grid (requiring clever use of the aforementioned office chair manoeuvre), multiple-headed player-controlled cacti, missing chunks from grids, grids with unevenly spaced segments and more. After several hours with these mechanics, players will find themselves performing intricate and brain-boggling acts of cactus choreography, organising quartets of cactus heads around densely packed grids where every line is of the utmost importance and perfect spatial awareness is the only way to avoid disaster.

The game’s lack of peripheral features is the only aspect where cracks start to show, and even then it’s only hairline ones. It’s an incredibly basic experience overall: there are no leaderboards, no level editor and not even a nod towards narrative to flesh out the path through the levels. It feels a little hollow, like a collection of levels and not a cohesive game. Still, this is a seriously minor complaint considering the quality of those levels, the game’s price and the fact that it was developed by one person. 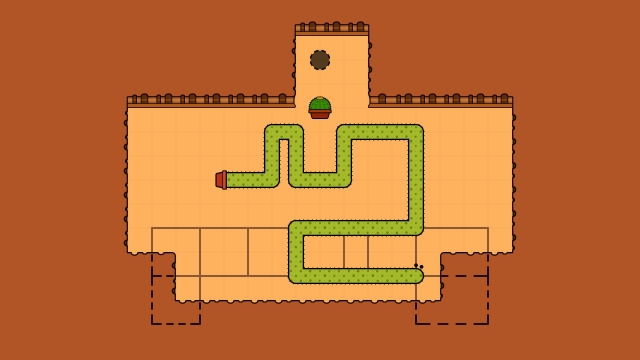 For a game which appears so simple, with such a relaxing soundtrack, Room to Grow demands an awful lot of concentration. I compared it to Snake at the start of this review, but there are no truly accurate comparisons: the game stands apart from anything else available in the puzzle game market. That’s not to say that it’s likely to inspire a whole new era of puzzle gaming, but it will provide a novel and genuinely challenging experience for those who are constantly on the lookout for new brain-teasers to keep their mind active.

Room to Grow (Reviewed on Windows)

Room to Grow stands apart from anything else available in the puzzle game market. It may not inspire a whole new era of puzzle gaming, but it does provide a novel and genuinely challenging experience.