It’s been a long road for Ryse, once a Kinect only Xbox 360 title; but you’re not here for a history lesson and that’s good, because Ryse isn’t here to give you one. Ryse manages to display the greatest aesthetics of any Xbox One launch title yet is a let down in almost every other department.

If you were looking for the definitive launch title, you might want to look elsewhere.The extended production cycle of Ryse is very apparent past the trademark Crytek visual polish we’re now very familiar with. Unfortunately, even after several years in development, the actual gameplay systems and mechanics seem to have been ignored to rush it out for the Xbox One launch. So let’s start with the positives: the game looks absolutely fantastic. Every facet of the art and visual design oozes with creativity and attention to detail. Every area in the game feels organic and not designed by a human hand (at least from a visual standpoint, but we’ll get to that later). The facial animations are second to none. There are moments in this game where you will look at the characters on the screen to search for a discrepancy in their digital appearance, but you will not find it here.

Remember clipping? An issue all gamers are accustomed to and one that can so greatly ruin immersion, is a thing of the past. Everything in this game interacts and looks the way you would expect. But this is a Crytek game, right? So you were expecting that? Well you’ll get more than you expected. This game is the best looking of the new generation launch titles, regardless of the 900p ceiling, you’ll be hard pressed to know the difference.

Ultimately, though, style and substance have to culminate to create something fantastic and Ryse has no substance. Boring. Bland. Uninspired. These are just some of the words that come to mind when I try to really sum up Ryse. My biggest problem when coming to reviewing this game was: what is there to say? Ryse suffers from middle-of-the-road syndrome. While everything about it is mostly polished, it should be as there isn’t much to polish. Gameplay is your standard spectacle-fighter, Devil May Cry, God of War-esque combat. A blocks, B dodges, X attacks and Y breaks your attackers guard; exactly what you would expect. Your character seems to control fine, but his proximity to the camera is a little off-putting at times. The controls don’t feel clunky or light, they just perform exactly as you would expect. This leads to a very playable game, it’s the addition of the quick time events to the combat that really makes this game boring. Quick time events are something that many gamers have come to detest, but if done well can add something to a game. Ryse doesn’t manage this balance, at all. Once you’ve hit an enemy the required number of times, a skull will appear above their heads indicating an execution is available. One hit of the right trigger in close proximity to this enemy will start a quick time event. Now, it must be said these quick time events, whilst very repetitive, are fantastic visual treats. Chopping a barbarian’s arm off then proceeding to chop his leg off, all while in slow motion, is extremely satisfying. If only the player felt like they were a part of it. 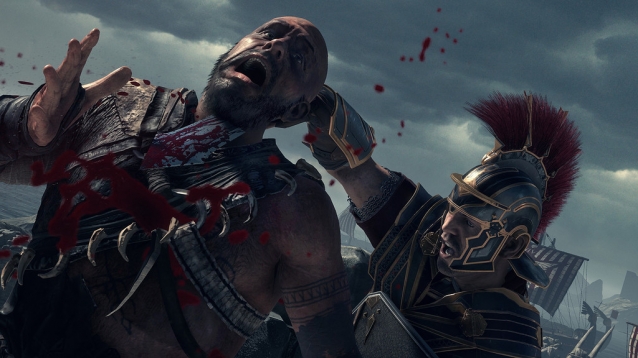 As was said previously, the level design is second to none in terms of appearance. Regrettably, the same cannot be said for what the levels end up playing like. Invisible walls, very obvious side paths, completely useless areas created for nothing but visual flair; these are all issues within Ryse that completely pull the player out of the experience. The story is another aspect of the game that shows promise, but when it comes down to it, is extremely average and nothing to write home about. Unlike Rome, this story does feel as if it was constructed in a day. The main character recalls his story to avenge his dead family, with a twist so obvious that everyone will see it coming a mile off.

The multiplayer component follows suit, feeling suitably tacked on and barely needed. You and a friend take on waves of spawning enemies in the Colosseum. Now, this doesn’t sound so bad but the combat is the same, apart from co-op executions, which allow you and a friend to pull off a quick time event kill, just without the quick time event. If your partner isn’t around, then you can expect to stand there with your digital penis in your hand until a certain time elapses or you press a button to end it. There is a progression system but, you guessed it, it’s tacked on. 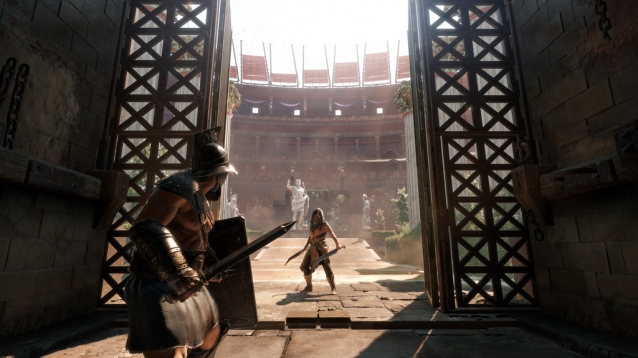 This brings me to the biggest failing of this title: the microtransactions. These make a huge appearance in this game yet are practically pointless. With every move, combo and execution comes XP and ‘Valor’. XP does nothing apart from act as a high-score indicator, ‘Valor’ is used as a currency to purchase upgrades. You can otherwise buy coins to buy upgrades, but in my first run through of the game I managed to max out my character before the end, using ‘Valor’ alone.Ryse falls short in almost every area in which a game can. Gameplay is shallow, repetitive and unrewarding, the story is not the slightest bit engaging and the levels are (very) pretty corridors filled with enemies. With no real replayability, this game gives you no reason to own it past the first playthrough.

Pretty and polished though it may be, Ryse is not an essential title.

Ryse falls short in almost every area in which a game can. Pretty and polished though it may be, it is not an essential title.