Samurai Jack is one of those shows that I have been meaning to watch for a long time. When I saw Soleil and Adult Swim Games were releasing Samurai Jack: Battle Through Time, it was the push I needed to get watching. I’m so glad that I finally got into the show, it is definitely a must-watch! I’m happy to report that even if you have watched all the episodes of the show, this game will be a new adventure that you have never seen, that will still tie into the Samurai Jack finale. They even had the original creator, Genndy Tartakovsky, and writer Darrick Bachman, working on creating an original story for the game. It won’t just be a retread of something you have seen before.

Samurai Jack: Battle Through Time opens with shape shifter Aku giving you the back story about his battle with the “foolish” samurai and how he opened a portal to send Jack into the future. This is exactly the same as the show intro. When I first started the game, for a moment I thought I had accidentally started playing the show. I found it really hard to write the review for this game, not because it’s bad, but because whenever I think of it I just want to go play it! Samurai Jack: Battle Through Time is an awesome action platforming game with tons of hack and slash elements thrown in, featuring all the enemies and characters from the show. The art style looks just like the show, but they have managed to make Jack look 3D, instead of the flat 2D but it doesn’t look weird. 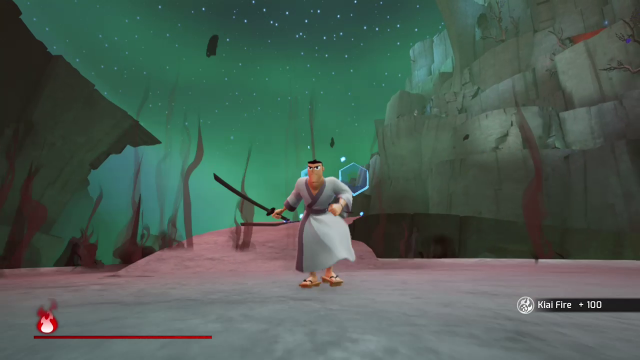 All your friends from the show are here to help you out on your journey, The Scotsman, his daughters, Rothschild and the other dogs. You will find them spread throughout the levels waiting to give you advice and a helpful item to assist you on your journey.
I was so happy to see barrels and pottery sitting around, just waiting to be destroyed, so you can take the contents within. There is something so satisfying about smashing brittle pots and being rewarded for it. I wonder if smashing pots in real life would be that fun, probably not, if you had to clean up the mess afterwards. Hidden inside the pots and barrels you find coins, and fire that you redeem to learn new skills. There are three different skill trees that Jack can learn from; Spiritual Skills to learn and upgrade spiritual being and inner balance, Combat Skills to learn and upgrade your fighting and combat skills or Physical Skills where you focus on the mind and body to upgrade your physical skills like jumping. It’s pretty obvious what combat and physical skills are but spiritual not so much. Spiritual Skills focus on increasing your luck so enemies drop items or let you increase how many items you can carry at one time. 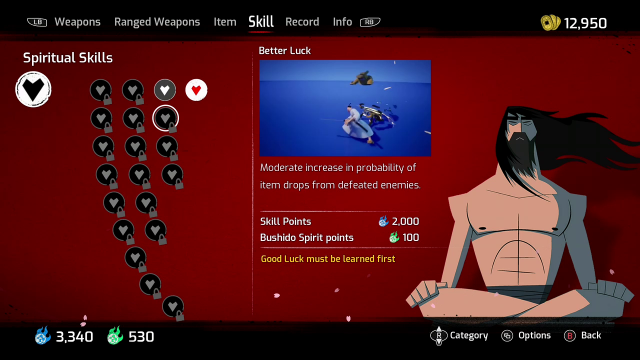 The game has multiple difficulty levels that you can choose from. I did the easiest which is Jack since I hardly ever play new games set in a 3D environment. Most of the time it’s retro style 2D games. Samurai Jack: Battle Through Time does a great job guiding you to where you have to go next. It subtly blocks off areas you don’t want to go to and there is a button programmed on your controller to make you face the direction that you want to head in. I found in combat when there were swarms of beetle drones, from the show, were attacking me it would automatically target the next enemy nearest to me as they were destroyed. You can turn this off, but I enjoy not having to fight with the camera to figure out who to go after next. I just want to attack and destroy!

Samurai Jack is not just a one trick pony, he doesn’t only use his magic sword as you can acquire a huge variety of weapons to use. Clubs, hammers, axes, bows, bo staff, throwing stars, tridents and even guns can be equipped to the dpad. This lets you quickly switch your weapons on the fly, so you don’t have to go into the main menu and scroll through everything. If a weapon isn’t your style, you can just fight using your fists or even a leg from one of the beetle drones you have defeated. The unique thing is your weapons can get worn out or destroyed from using them. Luckily, there is the option to pay to fix them up between battles, this will keep them in top fighting shape. I also love when you come across the music loving Da Samurai’s shop, you can buy consumables that restore your health, collectibles like beads to protect you, or you can pay for training to level up your skill using each of your weapons. It is expensive, but can really make a difference. 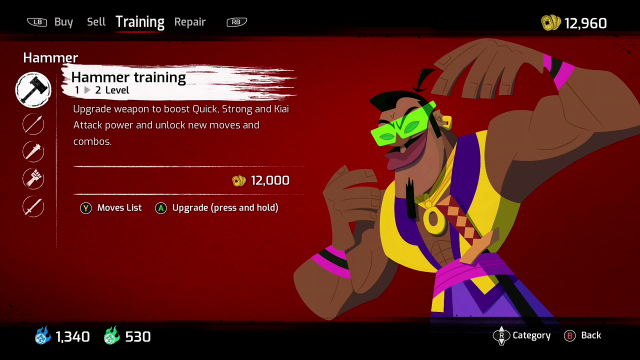 The game starts in the distant future, and as you progress, Samurai Jack is sent further and further into the past. Adversaries that Jack has battled in the show are back to battle again. Each enemy has an amulet that Aku uses to control them, once you defeat the boss and destroy the amulet a time portal opens. Jack keeps being sent further and further back into the past, where eventually he will face off against Aku himself, to try and stop his reign over the world, in all of time. There is so much to love in this game. If you are a fan of the show, you definitely have to check this one out. With three different difficulties to challenge, Jack, Samurai, Master Samurai there is a lot to keep you busy. If you are dedicated enough to complete all three you can unlock Master of Masters for even more of a challenge. If you want to try something different, take on the missions that are unlocked upon competition of the game. Destroy all the enemies and bosses using the assigned weapons, or try the Endless Mission if you were skilled enough to beat the game on the difficult setting. Even if you aren’t familiar with Samurai Jack, this game is still a great addition to your game library. I am very impressed that a TV show tie-in game was done so well. Samurai Jack: Battle Through Time is one of favourite games released in 2020.

Samurai Jack: Battle Through Time (Reviewed on Xbox One)

A great adaptation of the Samurai Jack cartoon, full of hack and slash action, cool weapons and a beautiful art style. Featuring an original story, even fans of the show never saw.