Sometimes, it’s hard for developers to stray away from a formula that’s worked so well for them, especially with a developer such as FromSoftware, which shot from being a relatively unknown studio to worldwide stardom almost overnight with the success of the Souls franchise. Despite the Souls games being a winning formula, FromSoftware and the Souls series creator Hidetaka Miyazaki decided to pursue a different path with their most recent title Sekiro: Shadows Die Twice. While it does hold some similar design decisions - such as the punishing difficulty that the Souls games have become known for – it becomes very clear within the first few hours that Sekiro is a completely different beast. It’s one that’s unapologetically focussed on delivering a laser focussed experience, breaking free from the trappings and conventions of the Souls formula, resulting in FromSoftware’s most exciting and fresh release in years.

During the end of Japan’s Sengoku era, players control the shinobi known as One-armed Wolf (also referred to as Sekiro throughout the game) as he’s set on a path of vengeance to retrieve his young lord - Kuro, who has been kidnapped by a powerful warrior Genichiro. This is due to Kuro being blessed with the power of immortality, which can be bestowed upon anyone of his choosing. Given that Sekiro takes place during a time of near-constant conflict in Japan, Kuro’s power naturally makes him an ideal target for many different factions, making Sekiro’s job of protecting him one that requires a large degree of skill and determination. As such, players will be spending their playthrough traversing through the varied Japanese inspired landscapes of the fictional Ashina region, facing down numerous imposing enemies in a journey that almost always feels overwhelming in what it demands. 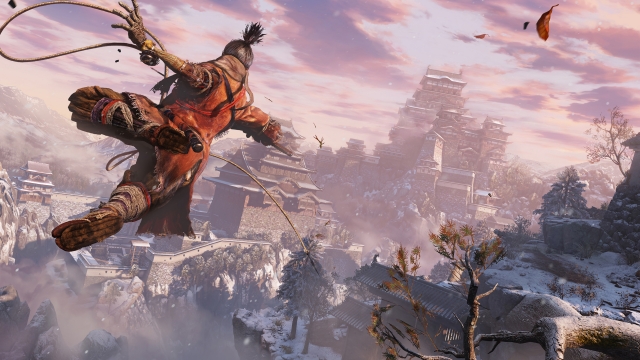 While there are numerous components to Sekiro’s gameplay, it’s the combat that’s the biggest take away from the game. “Swords clashing” was the main pitch of the game from the developers, with the emulation of that feeling being the largest priority. This feeling of steel-on-steel combat is achieved through Sekiro’s biggest mechanic; the posture system. The player and every enemy in the game have not only a health bar, but a posture bar as well which can be filled up to deliver a killing blow.

This is achieved through numerous different methods depending on the enemy, but deflecting enemy attacks with well-timed button inputs and striking back with your own barrage of sword slashes will be the way most battles are fought throughout the game. With Sekiro being relatively frail when it comes to taking hits, and successful deflections requiring precise timing, battles are often tense, with some of the lengthier encounters even feeling downright exhausting. There’s a steep learning curve to the game initially, but once the rhythm of combat clicks into place it becomes endlessly satisfying. You may find yourself having some trouble taking down even the most basic of fodder enemies early on, only to fly through areas demolishing them in seconds after getting the flow of the game down.

This posture mechanic incentivises an aggressive playstyle, with the meter gradually depleting over time, but too much aggression and recklessness can lead to a swift death. Enemies are also able to shake off certain attacks with deflections of their own, leaving the player wide open for punishment if they’re not careful. This, coupled with attacks that can’t be blocked by deflection such as grabs and sweeps make encounters feel constantly engaging, with spacing and movement also being key components, especially against more formidable opponents and the ruthless boss fights. 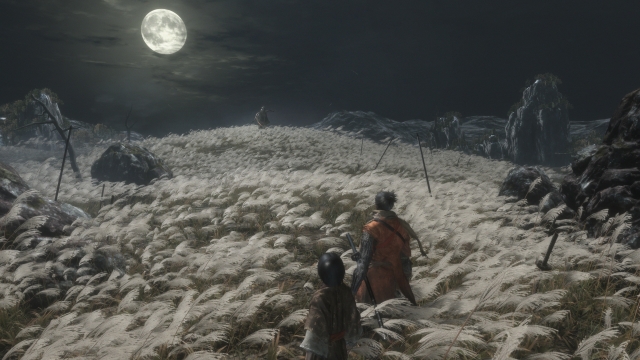 Bosses in Sekiro go beyond tough, pushing the skill of players to the limit relatively early on. Victory often demands near-perfection, with learning attack patterns and moves inside and out becoming a necessity. It can sometimes teeter on feeling too strict at times, but every boss has a few key weaknesses that can be turned against them to gain the upper hand, even if it takes a few dozen tries and several hours to crack that point of weakness.

Many bosses and enemies alike have certain weaknesses to Shinobi Prosthetic tools; weapons that are stored inside of Sekiro’s prosthetic bone arm. Each of these have several different utilities, allowing room for further experimentation in combat. Most of these tools are relatively straightforward in their most optimal application - like the Flame Barrel intimidating certain types of enemies leaving an opening to get in some free attacks - while others have a large range of potential uses, such as the Shurikens which can always act as a handy projectile weapon.

While combat is Sekiro’s strongest point, some encounters feel a little bit underwhelming when compared to others. While there are only a couple of boss fights that venture into the realm of complete aggravation or tedium, the game maybe reuses certain bosses one too many times. These subsequent encounters usually offer some different ideas to avoid feeling like complete re-treads, but it can be a little bit disappointing to be fighting essentially the same opponent at times instead of facing a new unexpected challenge. The brutal difficulty of the game may make it sound like a slog to get through, but the Ashina region that’s been crafted is so convincing in its design that it makes each struggle worth getting through. The Japanese setting is pushed in various interesting (and at times unexpected) directions, with so much detail in the world-building that the passion behind this game shines through. The true beauty of the world contrasts nicely with the brutality of the gameplay, making the arduous journey feel less miserable and oppressive. A strong cast of characters with their own share of unique and interesting stories and history also makes for a nice breather from the barrage of intensity, giving the tone and flow of the game some much needed variation.

Stealth is also a component in Sekiro, but it feels slightly more like a supplementary mechanic than one that’s fully explored. Areas are often constructed in such a way that it gives players ample space to sneak around in, to approach an encounter from various different angles. Sekiro is light on his feet, with his grappling hook allowing players to reach different levels of verticality with ease. While the movement options are all there, it’s the tools for stealth that are lacking, along with disappointing enemy AI that seems a little bit too oblivious to create any sense of true tension when dispatching of foes from the shadows. It works just fine for those who are happy to slim down the ranks before attacking the remainder of an enemy group head-on, but players looking to tap into their inner ninja may be slightly disappointed in the offerings here. 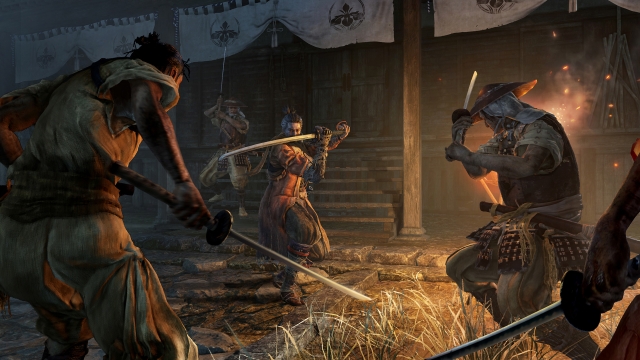 Sekiro’s reluctance to give players a helping hand, instead demanding that they master the core mechanics to proceed in the face of overwhelming adversity is a trait that’s extremely admirable. It feels like games focussed on pursuing their own ambitions in spite of the players feelings are becoming more of a rarity, yet Sekiro manages to succeed in this while also providing an experience that holds the players attention firmly, with combat and pacing that’s so tight that it’s hard to walk away from, even when it beats you down over and over again. It’s certainly not a game for those looking for a more relaxing trip through mythical Japanese inspired locales, but whoever decides to stick with Sekiro through its hardships are bound to experience one of the most rewarding and memorable titles of the year.

It’s certainly not a game for those looking for a more relaxing trip through mythical Japanese inspired locales, but whoever decides to stick with Sekiro through its hardships are bound to experience one of the most rewarding and memorable titles of the year.