I’m conflicted coming off the back of my time with Senran Kagura: Shinovi Versus. While I don’t out and out hate the character design and their representation, I certainly find it cringe-inducing. The confliction comes from the fact that I think this is a surprisingly competent beat-em-up, and probably one of the most enjoyable I have played in years.

Going in with no prior knowledge of the series, I was expecting Senran Kagura: Shinovi Versus to be around 95% fan service and cutscenes, and 5% rubbish combat - so they can still get away with calling it a game. What you actually get here is a sizeable number of short missions in between bursts of dialogue - there have been no cutscenes. 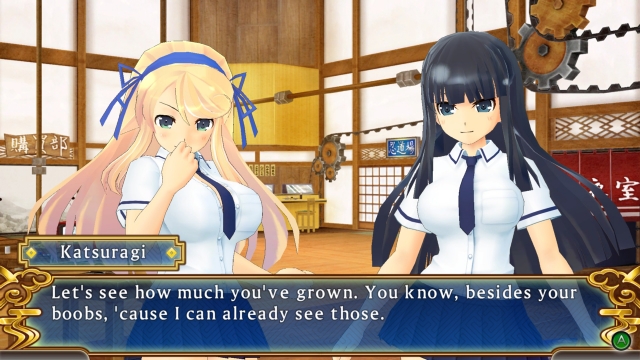 I didn’t realise that this was a port of a Vita game that was originally released in 2014 (or 2013, for the Japanese version) until I booted it up. Now, I haven’t played many ports of Vita games - the only other that I can definitely think of is Gravity Rush when it came to PlayStation 4 - but I’m fairly sure one of the first things the port team is supposed to do is adjust the aspect ratio. Not so here, as the widest menu screen I think I’ve ever seen greets me with a flash and a metal title theme.

It’s not just here either that seemingly obvious alterations haven’t been made. Stepping into the settings menu, the only display options available are the resolution, fullscreen/windowed modes, and language - this is insane for a PC game. There are no form of quality settings, and this shows in the game. While not looking bad, it definitely looks like a game that has jumped from another system - it doesn’t even match the quality of last years Senran Kagura: Estival Versus for the PlayStation 4. 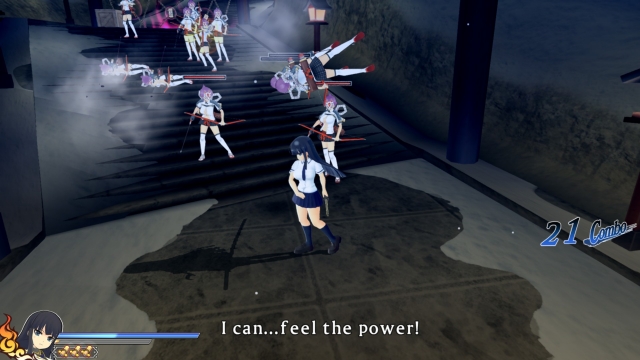 Starting a new game, you pick from one of three shinobi academies - each with their own storyline, but with intermingling characters. I chose the first option, and followed the story of the Hanzō Academy. The other two are the Gessen and Hebijo Academy, if those names mean anything to you.

After a brief introduction to Asuka, one of the playable girls, I’m in a sort of dorm room with all the other girls, and, surprisingly, one guy. Acting as a hub, the different doors around the room lead to things like the Missions list, the Dressing Room, the Store (All the DLC is included in this version, but has to be bought here with in-game cash)… there’s a bunch of stuff. The other girls can be approached and spoken to, with the game encouraging you to return to them after each chapter to grow your bond with them.

Choosing a mission, there are the main story missions and side stories for each character. Five missions long, these additional tales have you battling through waves of enemies and bosses for a reward - a nice big 1080p drawing of a large-breasted girl (but don’t fear, they never show the nips). 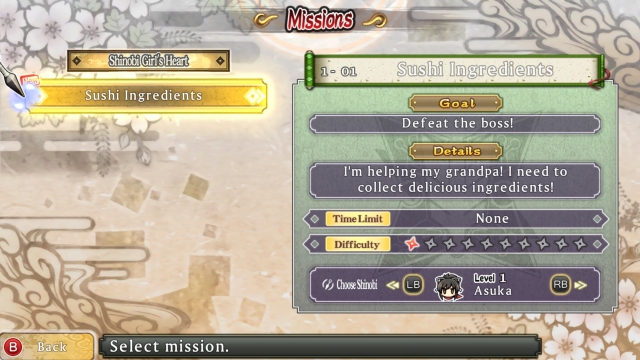 The main story missions have you rotating through the girls, limiting you to a specific girl the first time, but opening the list back up after completion to replay missions with the others, if you want to. They play out in the same way as the side missions: read some text, fight a wave of enemies, beat the boss until her clothes fall off. To be fair to it, being a Vita game, I won’t knock on the repetitive nature of the mission structure. They did the best they could with that hardware. At least there are plenty of girls to fight, and venues in which to fight them.

Senran Kagura: Shinovi Versus is definitely a game that could be described as a button masher, but it’s more in line with your Dynasty Warriors’ than your Bayonetta’s. It’s not so much based around combos and just mashing the light attack button will get you through most enemies and early bosses. There are also heavy attacks that can be chained onto the end of combos as launchers, with which a quick tap of the dash button will have you chasing your foe into the air to extend the combo, or to knock them back down.

At any time, you can activate Shinobi form, which changes the attacks and costumes of your girl, and refills your health - your enemy will also do this too, if you let them. Your girl becomes more powerful, and also gains the ability to use special attacks. Activating Frantic Mode will strip her down to her lingerie, becoming even more powerful, but also drastically lowering defenses. 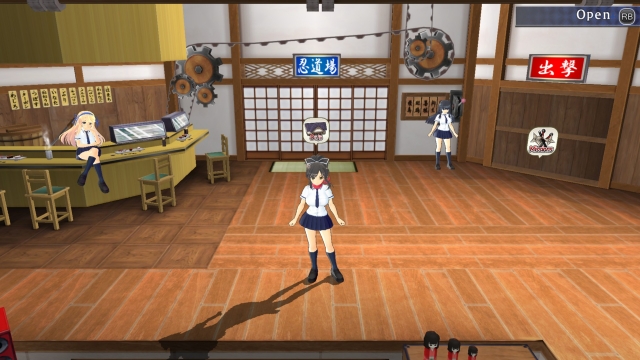 Okay, now here’s the weird part - attacking a girl enough will rip her clothes. Doing it again will cause her to drop down to her underwear. Right - if you can land either your light or heavy special attack on a girl in her underwear… the underwear comes off in a little two second cutscene. Icons will cover the nips, and a white flash of light will cover the bum, but… yeah…

This is a sexy game designed for weirdos, and I’m fully aware of that. It’s also an entertaining brawler, mechanically. Comboing large groups of enemies into the sky is always satisfying, but I do wish I was controlling a model that wasn’t quite so ridiculously sexualised. The Japanese attitude towards sex is it's own thing, and I’m cool with that, but here in the West, it will definitely raise some concerns.

I think all I can really say is that I had fun with it, and a lot of other people will have fun with it too. I just hope they’re having fun for the right reasons.

This is a sexy game designed for weirdos, and I’m fully aware of that. It’s also an entertaining brawler, mechanically. Comboing large groups of enemies into the sky is always satisfying, but I do wish I was controlling a model that wasn’t quite so ridiculously sexualised. I think all I can really say is that I had fun with it, and a lot of other people will have fun with it too. I just hope they’re having fun for the right reasons.