Serious Sam is known for spouting one-liners, huge body counts and a love of desert environments; like a less obnoxious, globe-trotting Duke Nukem. Serious Sam Fusion 2017 is an updated re-release of the classic series dragging it into modern times, but how does it fare? 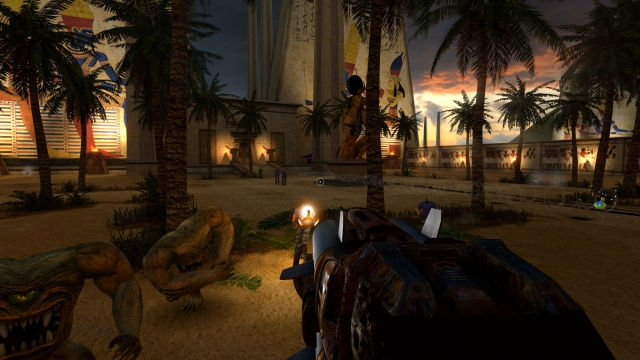 A lot of the improvements are under the hood like support for modern hardware and newer graphics APIs like DirectX 11 and Vulkan but it also for the first time allows the games to be played on Linux, Mac and Windows with cross-OS multiplayer. The new engine also provides split-screen multiplayer along with full controller support. As for the games currently available in Fusion themselves, they harken back to the ‘good old days’ of first person shooters where it was just you, your insane running speed, a gun and literally legions of enemies. Serious Sam HD: The First Encounter is the original game in the series and it does show its age. Whilst the new engine makes the game look remarkably pretty for a game originally released in 2001, it still suffers from its original design.

The First Encounter sees our hero Sam Stone use the ‘Time-Lock’ to travel back in time to Ancient Egypt to stop the evil alien Mental from destroying Earth. This involves collecting four elemental keys as your motivation. Of course, the story is paper thin and little more than a vague backdrop to allow Sam to make numerous quips as he murders the alien menace while saving the world. 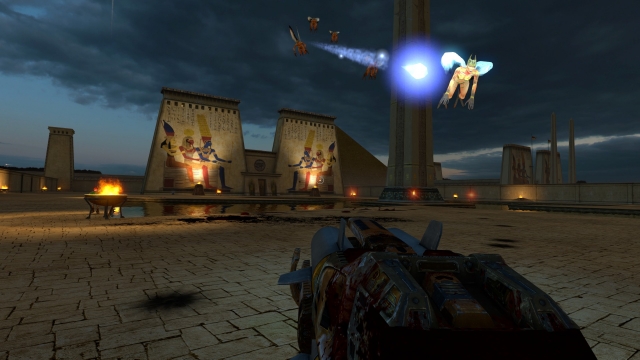 The level design funnels you from one literal monster arena to the next where you’ll often have to take out multiple waves of enemies that escalate over the course of the game. In between arenas there are sometimes very simple environmental puzzles to solve, like pushing two buttons, but mostly the focus is on shooting alien scum in the face.

This simplicity is refreshing but also a little frustrating. The game is a lot of fun still, even after all this time because the weapon selection is fun to use (you can fire an actual CANNON with CANNONBALLS) and the enemy variety is eclectic, from harpies to headless kamikaze men to Hungry Horace lookalikes. It does, however, start to feel samey very quickly as you go from big open arena to big open arena. The environments all (well, mostly all) being desert doesn’t help with this either and it soon feels like a bit of a slog, an enjoyable slog, but a slog nonetheless. The levels feel more structured, even whilst keeping the vast open spaces of the original. They are still linear but reward exploration and feel less restrictive with slightly more involved puzzles (although they still won’t cause any issues). The environments are also more varied this time, with plenty of grass on display as well as multiple locations ranging from Mesopotamia to Europe. The Second Encounter is a much more satisfying shooter to play, and playing it straight after the original is a ‘night and day’ style experience. Both games are still a lot of fun though and the remastered visuals still hold up pretty well.

Serious Sam Fusion 2017 itself provides a great environment for playing these titles in the modern age with Croteam unifying the series in a way that makes sense for a more niche first person shooter. Enabling them to improve the engine and benefit all their titles simultaneously.

Being able to play both competitively and cooperatively across both Serious Sam HD and Serious Sam HD VR titles no matter what the operating system series as a whole is a cool feature. Sadly there was a lack of competitive games during my time with the game but cooperative play with 6+ players worked flawlessly and I can only hope Fusion brings about some new found popularity for Sam Stone.

If you have fond memories of the originals or are just looking for a fun, if slightly flawed, first person action extravaganza then Serious Sam Fusion 2017 is a great way to play these classic games.

Serious Sam Fusion 2017 successfully brings the series up to date and in a unified interface. A great way to revisit Sam’s adventures and experience them in the best possible light.

Loved the original game on the Xbox.