Shadow of the Tomb Raider Review

I swear, Crystal Dynamics must be joking if they think they can pull this off a third time. The first two Tomb Raider games were fun, but when you start to reuse and recycle the same plotlines and action set-pieces from them, then you’re in danger of becoming the Uncharted franchise. Honestly, I don’t know where the developers heads were at when they started making the latest addition to the series. Perhaps they were listening to that one Whitesnake song? You know the one; “Here I go again on my own, going down the only road I’ve ever known.” Yeah, that must’ve been it.

Brutal opening aside, let me just say that I did enjoy Shadow of the Tomb Raider for what it had to offer. The problem is that it’s an offering I’ve seen time and time again. It’s an action-adventure game that has a little bit of heart, a smidge of character development, and some dramatic set-pieces, which all culminate in an amazing, over-the-top climax. Yes, there’s new features here and there, but it’s nothing that breaks the repetition. For example, having the ability to hide in the wildlife is a cool additional feature that looks good on paper, but do you think you’re going to use it in some boss fight? Like with The End in Metal Gear Solid 3? No. You just sneak around the area, so that you can eliminate enemies to make it to another section of the game, where you sneak around some more.

Popping up from my sea of cynicism, I will say that Shadow of the Tomb Raider looks beautiful. Now, I know I’ve said before in previous reviews that games nowadays usually look pretty slick, so it doesn’t account for much anymore. That being said, in this case, the amazing detail really helps make the world come to life more. Also, I might be crazy, but it feels like there’s a bigger emphasis on colour in this entry, as opposed to previous installments. 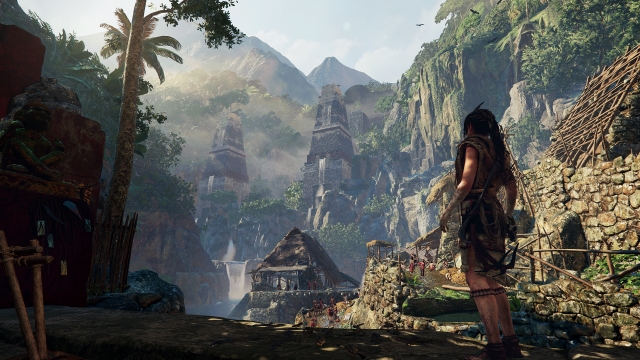 Another plus worth drawing attention to is the combat mechanics, which basically function as well as one would expect for this kind of thing. They're fluid, seamless, and, most importantly, lacking in any major game-breaking bugs (looking at you, Vampyr). Now, I’m not sure about you, but the combat is usually what sells me on these types of games, and Shadow of the Tomb Raider does not disappoint in that department. Of course, different players are going to have different experiences going through the game, but for me, things were fairly smooth all in all.

Moving back into negatives again, there’s one big sore spot that I really want to point out. During my playthrough, I realised something about halfway in that I just couldn’t shake. Long story short, was Lara Croft worth a whole trilogy of games? Personally, I don’t think so. Two, maybe. Even one game and some story DLC would’ve done fine. Three though, I’m not really buying it. Don’t get me wrong, they’re interesting titles despite being the same style of action-adventure as stated above (backtracking, backtracking). I guess I’m just not all that convinced that Ms. Croft needed a trio of games to tell her full story. The way I see it, the first entry was a solid enough tale of how Lara became the/a Tomb Raider. Making a title after called Rise of the Tomb Raider feels cheap, while this just feels like a cash-in. Again, that’s just my personal thoughts toward it. Lara Croft’s epic trilogy aside, her portrayal by Camilla Luddington is as delightful as ever. Yes, while I’m not the biggest fan of the stretched story, I have nothing but love for the performances in this game. The main reason why is because it feels like there's genuine care and concern behind the voices. It’s rather nice, actually, to be able to engage with characters on a more human level than say, a brick by the name of Master Chief (weird dig?).

Anyway, with all this taken into account, is Shadow of the Tomb Raider worth picking up? Honestly, I’d say wait for a sale before you go and grab this one. Unless you’re a huge Tomb Raider fan and you just need to know what happens next, I just can’t recommend this title at full price. It’s not bad, not by any means, but it’s hollow. It’s got the sweet graphics, the solid performances, the slick combat, but it feels like more of the same from the previous games. Yes, there is a new stealth mechanic, but it’s the new “thing” that’s meant to look good in the trailer so that it can sell more copies. As always, the choice is up to you, but my verdict is wait and see what kind of deals spring up.

Shadow of the Tomb Raider (Reviewed on PlayStation 4)

Shadow of the Tomb Raider is entertaining enough to be worth the price of admission, but it's an action-adventure title that follows the same beats as any action-adventure title. While the story may be new, the characters, the set-pieces, and the dramatic ending, are all things we've seen before.

Shadow of the Tomb Raider - The Pillar DLC Release Date

Shadow of the Tomb Raider Review

Shadow of the Tomb Raider