Working in a supermarket is hard, don’t let anyone tell you otherwise. If they argue, just stick a VR headset on them and let them do a few shifts of Shooty Fruity!

You’re an employee at a supermarket, and you have to serve customers. Except there are no customers, and while you’re carrying out your duties for the automated shop you are beleaguered by malicious fruit, which you have to shoot. The title doesn’t leave you wondering what your main task in this game is! 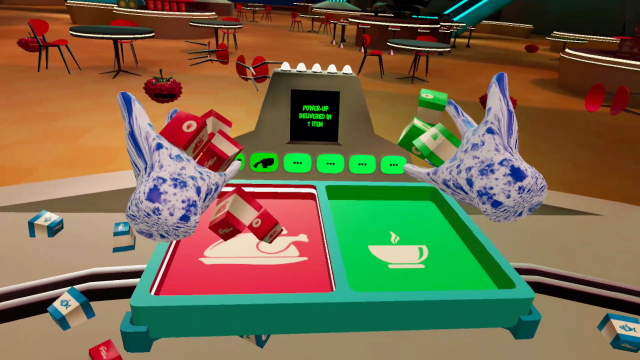 Unfortunately, all of your firearms break after a single clip/magazine. Fortunately, doing your job will get you more weapons - complete tasks faster and you get guns quicker. Fairly easy in theory.

Shooty Fruity starts off pretty simply. You unlock roles as you complete challenges in other roles, so at first your only options are to serve at the checkout counter. Scan items and push them down the ramp. Also, stop the fruit that attacks you before it damages your workstation.

The better you do in your job and shooting, the more juice you gain. Juice is used to buy better weapons - but that doesn’t mean you can fill your loadout with grenades! Each weapon has a tier value denoted by the colour of the card - blue are things like handguns, red includes shotguns and so on. Whilst working you will have to complete the task a certain number of times to unlock the next tier - so if you just put green weapon cards in your loadout, you’ll be waiting a long time for a gun. 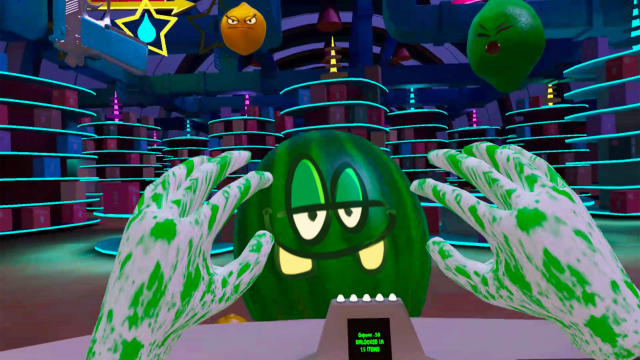 For the checkout counter, you will have to scan a certain number of items. But checkout isn’t the only job! You also have food preparation, which has you filling trays with the specific food - or foods - whilst being plagued by fruit. Packaging sees you sending the listed items down some chutes while you shoot.

It would be hard enough if everything acted like apples and oranges, which hop over to bash you. But then there are blueberries which move quickly, bunches of grapes that pepper you with multiple hits, flying cherries… That’s even ignoring the massive fruit that rolls in from the far end of the store, instead of dropping from the vents! Pomegranates, for instance, soak up a lot of ammo. The game insists that some weapons are better against some fruit, but I’ve yet to work out how to crack a pomegranate without using several weapons! 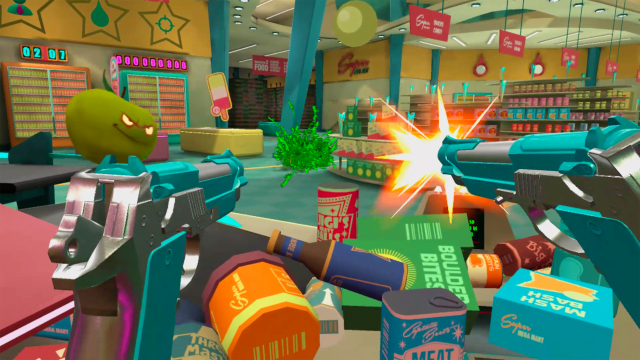 The gunplay is pretty fun, with a little red sniper dot showing roughly where your bullets are aimed. It’s not totally accurate, but realism isn’t something Shooty Fruity is going for. Again; you’re working shifts in a supermarket and having to shoot sentient citrus (and others). The weaponry trundles past you at eye-level, so it’s simple to grab them. Since the choice is limited by your job progress in each timed level, you might not always get to play with every weapon you wanted. It’s why you should vary your loadout depending on your ability to do the job - it’s no good to pack a load of high ordnance when you know you’re only going to unlock one of them. I quickly got into the habit of grabbing at least three early guns and keeping them on the shelves around my workstation, in case I ran out.

Your work is accompanied by sarcastic quips coming over the public address system. They warn when a savage swarm is on it’s way, or tell you off for shooting too much stock - or your own workstation. There is also some general supermarket “muzak” going on, but by its very nature you tend to ignore it. Unfortunately, the public address announcements get repetitive after a while, so you wind up ignoring those too… 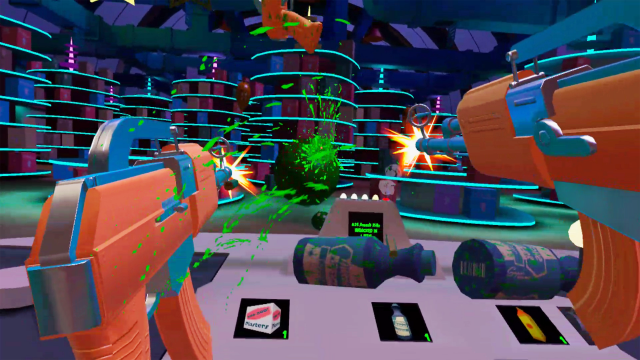 I quite enjoyed Shooty Fruity, but I don’t think it’s really suited for long play sessions. It’s definitely fun to go in for a couple of shifts now and then as it’s frantic, funny and a certain stress relief. Which is ironic, since it can get very stressful, just like really working retail…

A couple of niggles don’t stop Shooty Fruity from being a fun time - but watch out for those grapes. Pack a shotgun.