Silent World is a slow-paced, survival horror sidescroller that is crippled by its sluggish speed and absent of any substantial tension. That isn’t to say I never felt immersed in the game’s gloomy atmosphere, but the lack of evolving ideas and the extreme mundanity of the minute-to-minute gameplay took me out of the experience more than often than not. The sound design, visuals and story presentation descend in quality in that particular order, leaving a game whose cheap presentation can’t support the smattering of good elements that are buried within.

The first thing that grabbed my attention as I pushed the D-pad right was just how slow the main character controls. Silent World’s speed and physics are modelled to reflect the feeling of sneaking around a dark, foreboding world. It’s kind of a cinematic platformer in that sense (although, you can’t jump), but the level design rarely justifies the snail-paced movement. A lot of the game is spent walking down long corridors or inching up and down ladders meaning gameplay feels more tedious than suspenseful. The character animation is buttery smooth, but it wasn’t enough to alleviate my growing boredom as the screen slowly crawled from left to right with little interest standing in my way. 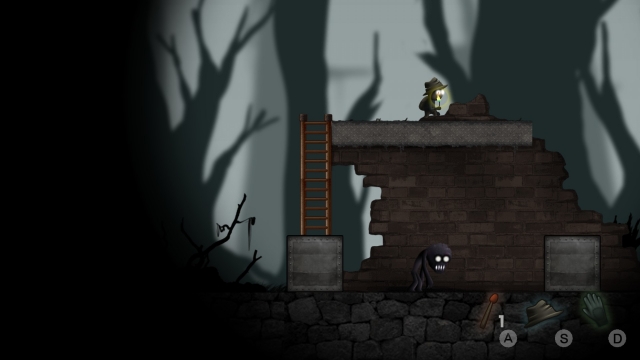 Silent World’s main gimmick is a double-edged sword. Visibility is limited to a small pocket of light surrounding the main character that only shows the part of the screen directly around them. This is great for the game’s atmosphere and the haunting moans of nearby monsters hiding in the dark are certainly impactful in their implementation. However, frustration arises when this feature is combined with the slow movement and stale level design discussed earlier. Given that I could only see a small portion of the screen, I would constantly second guess where I should be going and often ended up in a dead end that felt particularly cruel given how much time it took to get there.

The game is split into four chapters with shreds of story displayed on the loading screen of each one. It tells of a traveller trying to find other humans amid a post-apocalyptic world littered with mutants. It’s pretty generic stuff, and the fact that the loading screen automatically transitions into gameplay meant I often didn’t have time to read all the text. Not that I was missing much, as the writing is polluted with broken English. I now want to get “I have never heard the breath of the skin touches the body is tense” on a coffee mug. 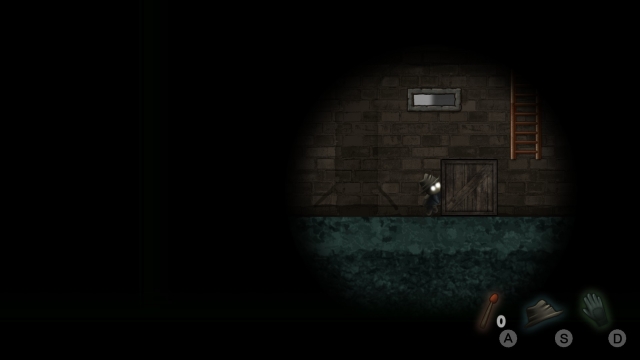 Dodgy translation aside, the more glaring issue is the stagnation of obstacles and mechanics that appear as the chapters progress. There is a grand total of one enemy type in Silent World, and every mutant can be easily avoided the same way. All it takes is hiding under your hat and tip-toeing past them as they stagger around clueless. There is a time limit to how long you can stay in this invulnerable state, but the cooldown doesn’t negate you from entering into the hat once again. Furthermore, simply spamming the hat button resets the mutant’s alert state and progresses the cooldown gradually, meaning it’s really simple to exploit this mechanic and slip by the enemies without a fear in the world.

Matches are a much better example of a risk/reward decision that you would expect to see in a survival horror game. For one, they are a scarce resource and often have to be obtained by going off the main path. Lighting one illuminates the entire screen for a few seconds and helps immensely with trying to uncover the correct way forward. However, when alight, the character cannot climb ladders, boxes, or hide within his hat. This means there is a genuine danger to using one, and I did die a few times when a mutant caught me off guard with a lit match in my hand. Unfortunately, the other obstacles are as uninspired as the enemies. Bear traps, locked doors, and boxes are all interacted within the same way in the first chapter as they are in the final. The only one I found to be satisfying was the moveable bear trap that can be used to catch mutants as they charged towards me. That never got old.

I do have to commend the game’s sound design, which feels appropriate given it’s called Silent World. For a small title, the creaky signs, muffled footsteps, and ominous growls sounded largely credible and aided the eerie tone. With that said, I did discover a glitch where the heartbeat sound effect that only appears when in hiding continues to play if I pressed “A” in hat mode. I wish the visuals were up to the same standard. They’re not an abomination, but there’s nothing creative about the flat, monochromatic environments or the accidentally cartoonish enemies.

After beating Silent World, I unlocked “Turbo Mode” which greatly increases the speed of the gameplay. I honestly wish my original playthrough was as accelerated as this. Not only does it completely wipe away the painfully slow movement, but there was a frantic energy to the new experience that greatly heightened my adrenaline. As it stands though, the base game of Silent World is a bit of a snooze fest that occasionally offers up an interesting idea or two. The game feels way longer than it actually is, and in the sort of way that made me acutely aware of how many coffee mugs I had stacking up in a short space of time.

Silent World may not be as broken as its English, but I think I’d rather take an advanced grammar lesson than limp my way through this uninspired, tensionless game again.