There’s nothing quite like the smug satisfaction of encountering a bug in a game. Encountering a bug in real life, however, would be far more cumbersome. So it is for our protagonist, couch-potato games tester Reggie, who realises that due to some freaky technological error, game bugs have wormed their way into his daily commute to and from work. Reggie must survive an increasingly hostile 2D platformer environment on his way to work, report the bugs, and survive the journey home again. 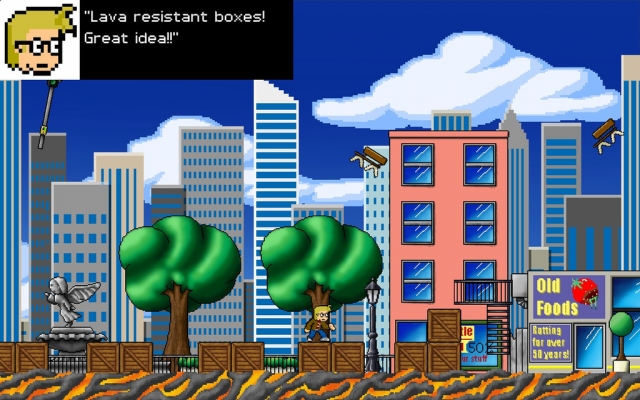 But, in classic 2D platformer fashion, the game is frustratingly hard. And Sir! I’d Like to Report a Bug is hair-tearing, face-clawing, rage-inducingly tough. So tough in fact that most of the updates and adjustments to date are the developers desperately trying to quell the cries of their fans, and make the game just a little easier with an easy mode, and by calming down some particularly aggressive obstacles.

Lord Puggington Games boast their “very shiny pixel art”. I’m afraid I must burst their bubble by saying it is fairly lacklustre pixel art. Although I have nothing against old-school, grainy pixelated graphics, Sir! is a bit too rough around the edges. It is very difficult to distinguish platforms that can be jumped onto with the background, which often results in random leaping and flailing as you figure out how to reach a taller building while the sun spits fireballs of death at your behind. Eventually, you realise that you must jump from that tiny blue mailbox, to a red phone box, and upwards. By then, you have probably already been incinerated. Rage. And when rain or money or other various substances begin to fall from the sky, you can forget about being able to see where you’re going. Cue more frantic leaping. And more death. So much more death.

When (if) you make it to your workplace, you are presented with a screen of possible bugs that you may submit. Some are very witty, and you’ll find plenty of game references in there that will be sure to make you crack a smile. Once you have found and submitted the bugs you encountered on the level you have just passed, time progresses and you must commute once more. 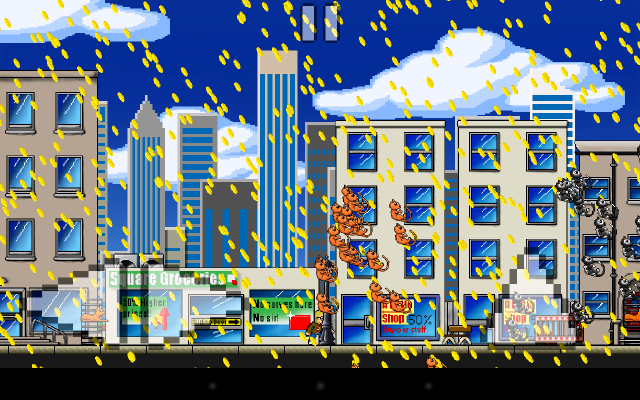 The level is the same each time, but also entirely different. Different bugs, different scenarios, and different obstacles. There is even a “The Floor is Lava” level; bring on the nostalgia! At one point, everything is blue. The soundtrack alters slightly here and there, but not enough; it becomes extremely repetitive, and despite Lord Puggington Games’ pleas to turn the volume up, I find myself instead turning my volume off. I didn’t even notice that one level is soundless.

Sir! originated as an Android game, and made the leap onto PC. As I understand it, the android controls are frankly horrible, and although they are very simple on the PC, they don’t fare much better. They are not nearly responsive enough, and game frustration should never stem from dodgy controls. And unfortunately, here, it often does. Leaping from one tiny, hard-to-see obstacle to another is difficult enough, without it being sluggish to boot.

Thankfully, the game is fairly short, spanning over a week in the life of Reggie. The Thursday level really sums the game up; everything in the environment suddenly begins to fling itself at you, killing you on impact. And this is when you realise that all this time, the whole world has been out to get you. The world wants you dead. And more times than one, the world is going to succeed.

In all, Sir! I’d Like to Report a Bug is witty, steeped with game references and is definitely challenging. I played it entirely in easy mode, for the checkpoints, and I found it difficult enough. It is, at times, too difficult, but in fairness, it never pretends to be anything but a challenge. The soundtrack and graphics are lacking, but the premise of the game is entertaining.

Sir! I'd Like To Report A Bug! (Reviewed on Windows)

It currently costs just a couple of pounds on Steam, and so is worth a go if you want something to really get your teeth into. But if you aren’t a total masochist, save it for the bus fare.