Infinite Dreams return to the console space with their latest in the Sky Force series, Sky Force Reloaded. Having played Anniversary through to 100% completion, it’s fair to say that the predecessor was a great title, which would surely mean that a sequel can’t do much better, right? 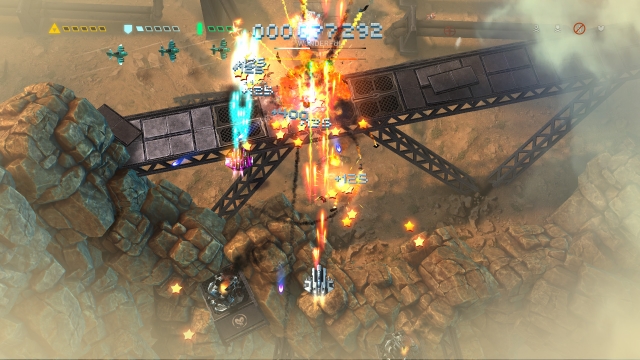 Reloaded sees you taking on the daughter of Anniversary’s nemesis, who has come to exact her revenge against the titular Sky Force. It’s quite thin story wise, but then, all you need to exact vengeance is someone that’s out for your blood.

There’s nine levels in the game, along with six additional tough bonus levels. Each stage has four levels of difficulty: normal, hard, insane and nightmare. Each successively increases the enemies health and firepower. This lends itself to a difficulty curve that goes with your playstyle, so you can enjoy the entire game without becoming overwhelmed, unless you choose to go that path. For each difficulty - there’s also four medals you can earn: destroy 70% of the enemies, destroy every enemy, rescue all the humans, and don’t take any damage throughout the level. If you want to progress up the difficulty levels, you’ll be needing to get each of these medals on a stage to unlock the next increase in challenge. 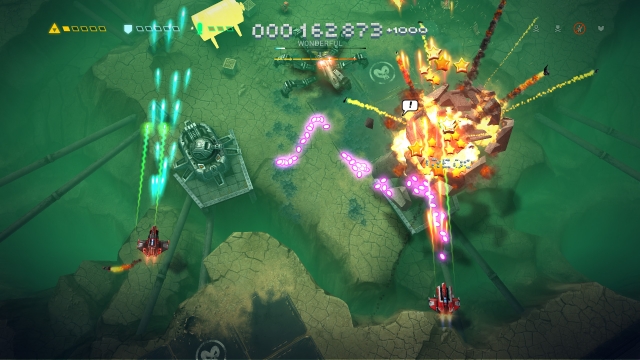 Which is where the updated upgrades system comes into play. Building on the upgrades from Anniversary the categories are the same, however, there are more levels of upgrades available, so you can finely tune your craft’s firepower to suit how you want to play. Struggling to stay alive? Grab some more health. Want to be able to purchase upgrades faster? Go for the magnets so you don’t miss any of the stars that the game uses as a currency.

There’s also different craft that you can fly in this outing, each with their own special perks. You start in the bog-standard ship you had in Anniversary, though, as you complete missions you’ll find parts of other ships - complete the level with that part (and repeat a few more times with additional parts) and you’ll unlock another ship to play. One has additional health, but has you moving slower, for example. Whilst another turns you into a glass cannon - you can deal a lot more damage, but you take more damage from enemies in return. Bonus cards also make a welcome return, some granting permanent benefits, whilst others will only give you a temporary boost. Lastly, you can also earn points toward certain challenges, such as killing a certain number of enemies or rescuing many humans to earn prestige points, with which you can unlock eight different technicians that will grant you additional perks, however, you may only have one technician active at a time. Along with all this, there’s also a brilliant electronic soundtrack, which delivers both background ambience when flying through standard waves of enemies, picking up the tempo when you’re up against a boss, raising your heart rate along with it. It’s well executed and goes with some great voice overs from the characters.

In essence, this is exactly what a sequel should be, it builds on what made the first outing great - that is how good the controls feel, weaponry and level of difficulty, and augments that with additional features, such as a more in-depth upgrade system, new craft to fly and more levels which in turn also show a wider variance of location.

Delivers what a sequel should be, with more of... everything... on top of the solid foundations they had with the predecessor. Fans of shoot-em-ups that aren’t straight up bullet hell titles should be looking into the Sky Force franchise.