When I first experienced Slayaway Camp’s marketing campaign, I wasn’t exactly sure what kind of game it was, if even a game at all. It was made to look like a classic horror film from the 80s, poking fun at common cliches and themes from the genre. Retro music and real life footage mixed in with cartoon violence made this project mysteriously appealing from the get-go. Marketing hype had me ready for something of insane proportions, but upon further investigation I was stunned to find Slayaway Camp is just a simple, slider puzzle game. Nevertheless, it’s better than most other puzzle titles because of its homage to popular horror films and incredible atmosphere.

Slayaway Camp does as much as you can possibly do to buff a simple concept and turn it into a full-fledged game. The concept of Slayaway Camp is simpler than some flash games. Your objective is to slide an avatar around a maze board, and use various bumpers to navigate and murder innocent victims. The scenarios get progressively more difficult, adding in obstacles that can kill both yourself and those around you. The game is all about positioning, predicting future moves, and utilizing your environment. I swear I’ve seen a slider game like this countless times before, but I’m unable to put a name on one. 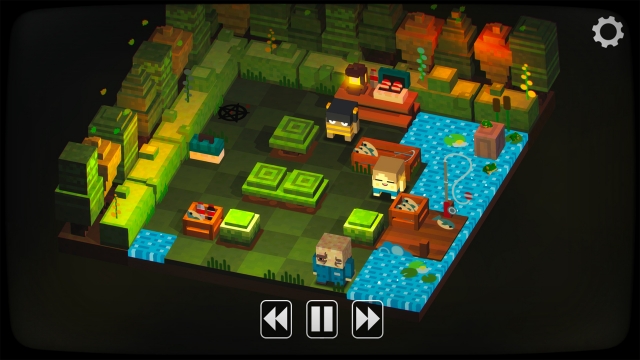 Now, it’s clear Slayaway Camp is much more than its gameplay mechanics. Level sets are turned into “movies”, where each collection provides a new theme and humorous cutscene for your enjoyment. Also, every level has a horror-themed joke or cliche to go along with it, which often directly contributes to gameplay. For example, there are a few stages where two telephones exist on the gameboard. Ringing one of them will cause your victim to pick up the other line, and allow you to sneak up on them for the kill. I believe this is a reference to the Scream franchise. In some situations you’ll also need to use the bodies of your victims to aid your positioning. This is accomplished by either scaring them, distracting them, or bouncing off them. Ultimately, Slayaway Camp keeps you entertained each and every level by throwing small features and references into the game.

In regards to artwork, a ton of effort was pumped into ensuring every stage looks unique and catches your eye. Although most of the objects lying around the gameboard are just aesthetics, they do a great job of keeping you immersed. I found myself constantly admiring the voxel graphics, as they surely do pack a punch. In addition, the game’s menus and UI resemble an old VHS tape and video store, making the Slayaway Camp a reference in itself. It was a bit jarring to see the jump from campfire Minecraft graphics to something out Jigsaw’s mind from Saw though. Also, significantly less attention was put on the game’s interface than the levels themselves, unfortunately. The menus look like someone could have made them in a few hours.

As a casual horror fan, I was pleased to see Slayaway Camp has a “kill cutscene” feature. After beating a level, your character will use a gory special kill method against someone, and if it’s successful, you’ll get some coins to spend on unlocking new kill types. Many of these kills are creative and downright ridiculous, just like in the cult films of the 80s. Although Slayaway Camp constantly reminds you of how bloody it is, I found the violence to be pretty underwhelming. Whether I’m just desensitized or cartoon graphics downgrade the level of gore, don’t let the warnings turn you away. I don’t think Slayaway Camp is much more violent than half the games out there, but it might not be a good idea to let young children play it. 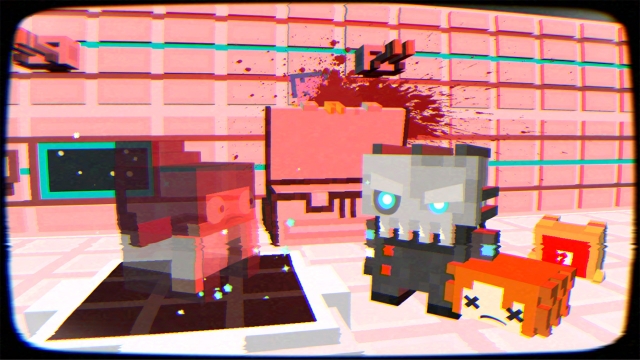 As I mentioned, coins are given out for each successfully completed level. These can either be used on unlockables or to skip extra-challenging puzzles. Level difficulty ramps up quickly, so saving your coins for the truly difficult stages is important. I found myself with a nice stockpile well-within the game. Without coins, you could quite possibly get completely stumped. Lastly, I should mention there are enough levels to keep you entertained for quite some time, so Slayaway Camp’s amount of content is well-off.

Whether you’re a horror fan or not, I highly recommend Slayaway Camp. Although the game could use a bit of polish around its UI framework, a ton of thought was put into countless popular culture references and cubed graphics. If you’re looking for a gorefest though, this isn’t the place to find one. Slayaway Camp is really just a simple puzzle game with a great theme, so stay away unless you enjoy puzzle games to some degree. Essentially, being a puzzle fan is more important than being a horror fan when it comes to this title.

Although the game could use a bit of polish around its UI framework, a ton of thought was put into countless popular culture references and cubed graphics. If you’re looking for a gorefest though, this isn’t the place to find one.