Rebellion missed a trick with Sniper Elite 3. Not many people were playing the multiplayer (at least on Xbox One) and so I was forced to play almost every game with one other person. This turned out to be the best thing that could have happened. The game turned into a tense stealth-a-thon that lead to the most intense action I’ve ever had while playing a game. In my first game, I sat in a single spot for ten minutes waiting for the other player to make his move. At any moment he could have flanked behind me but that was half the fun of it. Eventually he did make an appearance and I lined my shot up. I missed, panicked and fired several times more as he ran for cover. Eventually he disappeared and I knew I had to move.

Breaking cover was even more intense, was he watching? Was he just running for cover himself? Had he decided to flank me and so had no line of sight on me? So many questions. Eventually, I decided to move not that far from where I was previously, just incase he showed up again. So I found a spot that overlooked the main area of the map leaving only my previous hiding place and a few little buildings out of my sight but not so far that I couldn’t keep an eye on them if I felt like it. I then played another waiting game. For the remainder of the match I sat on that hill behind those sandbags waiting and watching for something to move. With thirty seconds to go he popped up in the middle of the town on a rooftop: this was my last chance. I held my breath, zoomed in, waiting till my marker was right over his head and pulled the trigger. And I was greeted with a bullet cam showing my bullet flying through his jaw.

Comparatively, the single-player is repetitive and mind numbing. There is no tension playing against AI. Just more mindless cattle to slaughter, even running at you, eager to have their virtual skulls blown apart in slow-motion by my high-powered rifle. This is one of the major failings of the game overall, unless you’re playing on authentic difficulty, it’s extremely easy. But this doesn’t stop the game from being fun. 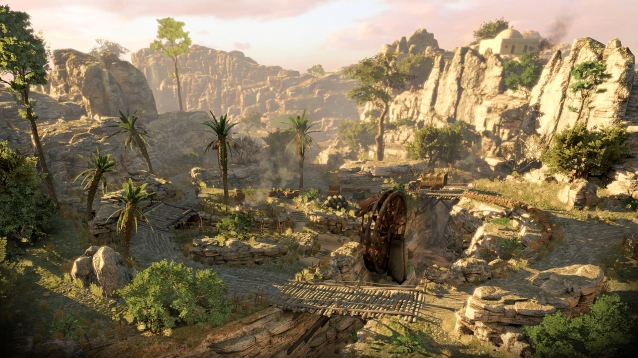 Despite the bland difficulty Sniper Elite manages to be a fantastic shooting gallery. The most impressive feature of the series is the well known slow-mo, x-ray kills that are a result of any well placed bullet that’s fired from any main sniper rifle. If this kept you entertained in V2  you won’t be disappointed here, however, if you found it repetitive and monotonous: this isn’t the game for you. If anything this mechanic is more prevalent than before. It’s the foundations that the whole game is built on, and it shows.

Rebellion has figured out that the whole realistic ballistics thing works better when you have wide open levels to make use of it. No longer are you forced down corridors (for most of the game) but are given an objective and asked to achieve it anyway you see fit. This is where the feeling of being a sniper really comes alive. Several times I found setting up in an elevated position hundreds of meters away and taking my target out while masking my sound was a much more plausible option than sneaking all the way up to it. Although the level design has progressed, the same cannot be said for mission design. The issue that arises is: this is a sniper game. In a sniper game your sniper is, quite obviously, your most prominent weapon. The game wouldn’t be fun if you didn’t have to use it. This means that most of the objectives are things that need to be killed and doing that can be achieved best using your sniper rifle and in turn causing slow-mo, head-crunching death. This does start to get repetitive and give the missions a rinse-and-repeat feeling. Kill this guy, get his intel, kill the next guy, get his intel, kill these vehicles by shooting their conviently placed weak spots, etc.

This isn’t really something that can be helped too much and you are given quite a few options in how you’d like to deal with enemies from grenades to land mines, but it all comes back to the sniper rifle. It’s the easiest and most satisfying way to do anything in the game. The story is standard WW2 fare and doesn’t really  make an impact. It serves as a convenient device to sling the levels together, but you really know that the game is all about that bullet-time kill-cam I’ve talked so much about. You won’t care about the Nazi general or the wonder weapon he’s building. It doesn’t matter. It just gets in the way of all the lung disintegrating, kidney obliterating, eye bursting, brain splatting action. But it’s so satisfying when you do pull those kills off that it doesn’t even matter.

The environments feel so much more lush and fleshed out than the previous installments. Bright blues and pastel yellows are everywhere, giving a much needed splash of colour to the Sniper Elite palette. The game runs pretty well too. I did experience quite a bit of screen tear on the Xbox One version, but this may just be that version, but the game never seemed to slow down or chug at any point. This is impressive and gives the game an overall feeling of polish that hasn’t really been seen on new-gen up to this point. Sniper Elite 3 is an odd occurrence. When I was playing it, I was engrossed and just wanted that next headshot, but when I wasn’t playing it I was almost dreading the monotonous grind that were the missions. What did make me come back again and again was the multiplayer. Yes I had to wait a while to get a single opponent but it was all worth it when my perfectly timed, weighted and aimed bullet went through my enemy’s skull.

Essentially, the game is a solid experience for anyone who has enjoyed the series up to now. If you’ve never tried it then this is the one to jump into. If you’ve never liked it, this won’t convince you. It’s more of the same but it’s polished and unapologetically fun.

Lastly; Rebellion, for the love of all things game related, put in a 1v1 mode on the already existing maps. Please?

Sniper Elite 3 (Reviewed on Xbox One)

The game is a solid experience for anyone who has enjoyed the series up to now. If you’ve never tried it then this is the one to jump into. If you’ve never liked it, this won’t convince you. It’s more of the same but it’s polished and unapologetically good fun.

A History of Sniper Elite DLC's

A History of Snipers: Who's Karl Fairburne?