I have a long-standing love of the character of Sonic the Hedgehog, as shown by my collection of Fleetway Publishing’s Sonic The Comic -- issue 1 to 215 (out of 223 issues, missing ~5 of them), and had played every single entry of the franchise from the original all the way until Nintendo had exclusive rights. So although I may not be able to call myself an authority on the blue spiky one, know that my fanfiction comes from a place of love. Also this review. Maybe don’t look up my fanfiction…

Up in the skies above Mobius, Sonic and Tails chase Dr Robotnik Eggman to rescue some of the tiny animals he uses to power his Badniks. The heroes’ biplane is shot down, and they have to make an emergency landing on a floating series of islands known as The Lost Hex. Yes, they appear to be reusing the plot of Sonic The Hedgehog 3, by having them crash on a strange island, but at least Angel Island didn’t start floating until later in the game… Though the airspace over Mobius must be really crowded with Angel Island, multiple Death Eggs, the Lost Hex and that Miracle Planet from Sonic CD... 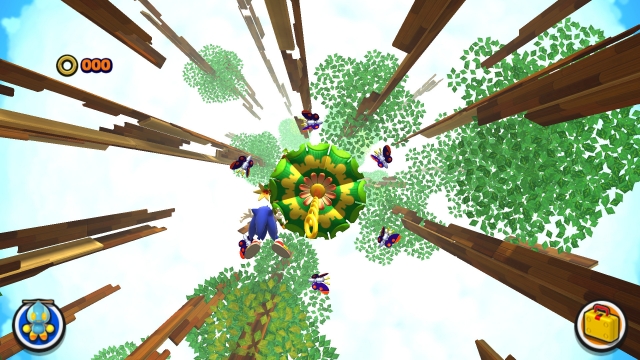 Even looking straight down, you can't see the planet below...

Sonic Lost World is hard to pin down to one style, as it takes both a 3D and a 2.5D approach to level design -- sometimes actually within the same levels -- but it is a platformer at heart. Needless to say you must track down the villain, this time aided by six ancient monsters called Zeti, and known as The Deadly Six. They are quite reminiscent of the seven deadly sins, although obviously one down. There doesn’t appear to be one representing envy.

As this was originally on the Wii U and 3DS, I did a little research and found that Sonic Team originally began production on Lost World as a PC release, before Nintendo came in with their sacks of cash. Unfortunately, the polish and shine that such a PC release should boast is missing from the cutscenes. They are as entertaining as Sonic should be, even the veiled threat that Sonic was about to kick one of the Zeti in the nuts, but they appear to be from the 3DS release due to the jagged edges all over the character models. The levels themselves run smoothly and look great, so it’s not as if some work hasn’t been put in to spruce the game up, especially as it boasts 60 frames per second. 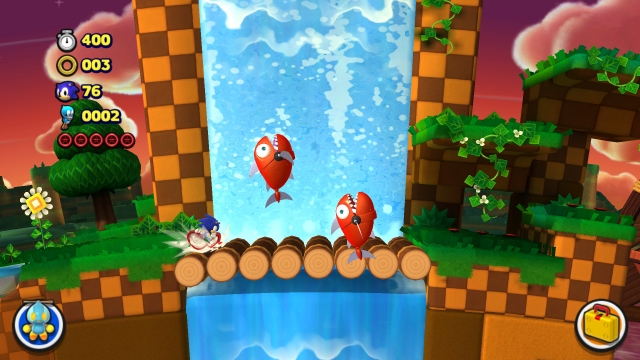 This is a screenshot taken off of the Steam page. They had 76 lives!

The music also sounds great, though I imagine it did on the Wii U release with a good enough sound system. It’s reminiscent of the music from Super Mario Sunshine; very cheery and happy, upbeat to a fault. Even after numerous deaths, I still found it cheering me up after a few moments.

Given the way gravity works on the Lost Hex, death is almost a certainty. Along with each level being the usual ‘this one is grassy, this one is sandy, that one is icey’, they are each designed very differently. You might be running across the ground one moment, only to suddenly flip -- meaning you were travelling down a waterfall only to turn around and go up it. The camera ably follows your progress through the levels, which is usually a major complaint of Sonic titles. 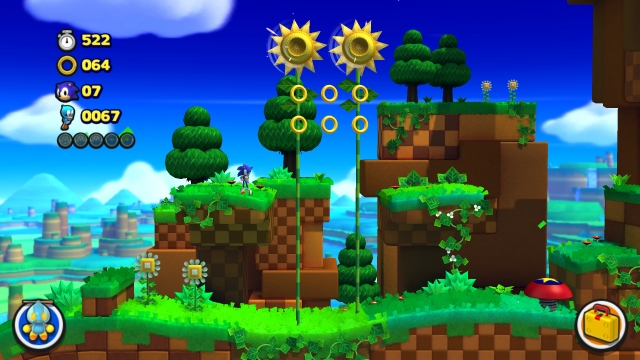 Though with camera angles like this, it's hard to screw it up

Sonic Lost World recommends you play with a controller, and I have to say that I would hate to play this on a keyboard. The camera doesn’t require any input, as it is almost always facing the direction you have to go. I have to agree with the decision, as the various worlds are difficult enough to navigate without getting lost to a dodgy camera.

My major gripe with the game is how some levels don’t follow the rules of logic which they set out. Loads of objects emit their own gravity, which is how you do the aforementioned upside-down running. But one level in particular has you running down a tree, and allows you to jump over obstacles coming at you -- fair enough, videogame logic -- but when you mistime a jump, you fall towards the bottom of the screen and die, which bugged the hell out of me. 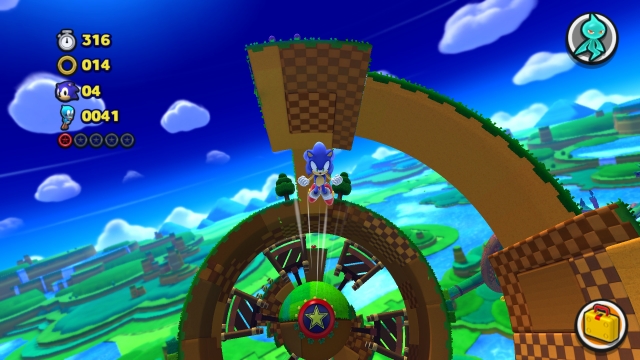 You go from where those trees are, to the spring, to being upside down on another platform all within three seconds...

Sonic Lost World comes bundled with the NiGHTMARE Zone DLC, which is the only non-Nintendo DLC, and is basically a fight against the bosses from the main game, reimagined and meshed together with the bosses from NiGHTS, a Saturn game from Sega. It’s a nice addition to the package, especially for fans of that title.

Some of the levels are oddly designed, but as there are some collectibles, and a load of challenges given to you by Omochao which will give the game some longevity. You’ll spend ages wandering around (even longer if you forget to hold down the ‘Run’ button whilst moving) as you try to locate red emblems, or wall run for the right length of time. Another one showing the one who took the screenshots blatantly cheating... I want those cheat codes...

This may not be the miraculous return to the ‘greatness’ of the original trilogy, but it’s a very fun game. Some of the running sections can feel very on-the-rails, as the controls are literally not required, but they are few. For some it may be on the easy side, but I’ve mentioned before that I play games for fun, not for challenges that will snap my controllers.

It can be a little "on-the-rails", but it's a very nice looking, smoothly playing platformer.