There’s three things I remember about 1993: watching Red Dwarf on a Friday night after school, spending a terrifying amount of time on my Amiga 1200, and getting introduced to Games Workshop’s Space Hulk tabletop game. Initially I had balked at the idea that throwing dice around a board could be as enjoyable as video games; surely it couldn’t compare to the likes of The Secret of Monkey Island or Speedball 2? It turned out I was wrong, Space Hulk was majestic, to me it felt like a game of chess that I could understand (I was quite young). The use of my imagination replaced the need for animated battles; it was nail-biting, strategic and provided as much fun as my trusty Amiga.

Not long after this introduction, I discovered there was a video game version of Space Hulk. To say I was excited by this news would be an understatement. I imagined the 3D models of the marines lumbering around in their terminator armour, the battles I played out in my head brought to life on a TV screen. Unfortunately, when I finally did play the Amiga version I was met with frustration and disappointment. The game was impossible! I understood that the main antagonists - the Alien-style Genestealers - were tough... but Jesus! The game felt so unfair, and graphically it was far from what I had envisioned. Maybe it was just technology that needed to advance in order to create a perfectly computerised version of Space Hulk. 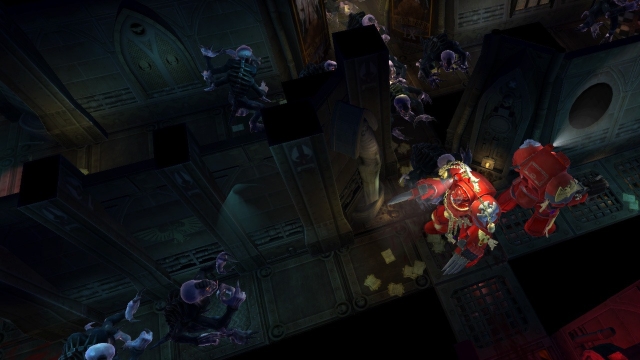 Jump forward to 2013, technology had moved on quite a bit from the Amiga years, so perhaps the time was right for a new Space Hulk to appear. Developers Full Control thought so, releasing their take on the franchise in the middle of the year. Would this be the game I’d been hoping for? No, it was just more frustration and disappointment - though admittedly less than in 1993. This Space Hulk was close to its tabletop roots, but it was also clunky, awkward, unbalanced, lacked polish, and had little depth.

So now we’re almost at the end of 2014. In looking to fix the criticisms leveled at last years version, Full Control release Space Hulk: Ascension Edition. This isn’t an expansion or a Metro Redux style graphical improvement and polish, this is essentially an entirely new game based on the 2013 release. Some owners of the previous Space Hulk may feel a bit irked at this new and improved version coming out now, which is why Full Control are offering a 15% discount off Ascension’s price. 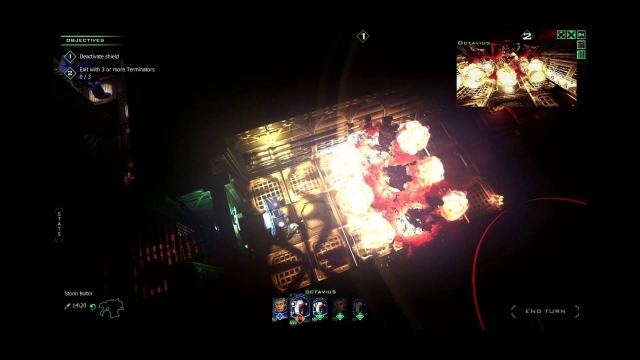 For those of you new to Games Workshop’s world, Space Hulk is a turn-based game played out over a tiled ‘board’. In the PC version, a fog-of-war covers the unexplored areas of each mission’s map, though some sections are slightly illuminated to give a sense of the area’s layout and boundaries. Each of your space marines occupy one tile individually, meaning the tight corridors and rooms require some tactical forethought before each move. Every action uses up some of the marine’s action points (AP), which are limited. Once you click the ‘end turn’ button, the genestealers make their moves. These enemies don’t have ranged weapons, but they will be on top of you at lightening pace, and tough as your marines are, the odds are stacked against them in a melee battle against one of these monsters. Missions involve such tasks as retrieving items or ‘cleansing’ areas, with many having multiple objectives. Of course if you say ‘turn-based action’ these days, comparisons with X-COM are inevitable. While the games do have some similarities, the claustrophobic nature of Space Hulk gives it a slower pace than X-COM.

I start up the tutorial - something that’s recommended even for those who played last year’s version - and straight away the improvements are obvious. The game’s been given a huge graphical overhaul: highly detailed characters, a head-cam in the corner showing your space marines point of view, lighting effects, blood and gore, now this is what a Space Hulk game should look like. 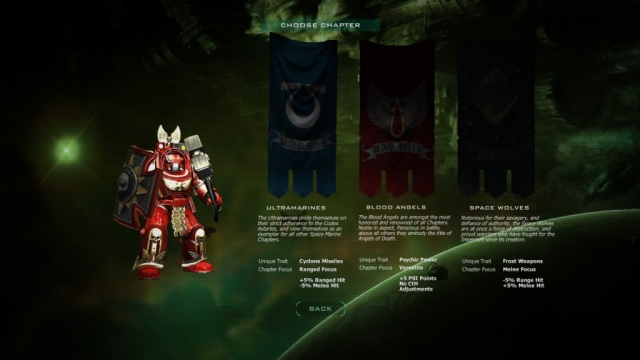 At the start of a new game you’re given the choice of which marine chapter to play as: Blood Angels, Ultramarines or Space Wolves. Though I didn’t notice a great deal of difference between them during play, apart from cosmetically. There are three campaigns available, each one set on a different mega-ship, the titular space hulks. I did find the lack of an introduction to each mission took something away from the overall story element of the game. Having just a brief, written description didn’t exactly immerse me in the universe. Maybe just a small cutscene here and there would have added more interest.

The new and improved squad loadout screen is a great aspect of Ascension. By earning experience points through kills, your marines can level up and earn new weapons and skills. As with most games that contain RPG elements, levelling characters also means increasing their attributes; it’s hugely satisfying to create a squad leader whose melee skills would put Conan to shame. Making sure your skilled veterans survive becomes hugely important in the later stages of the campaigns. There’s also the option to customise the appearance of your squad members, even being able to name them, which gives a sense of connection to your marines. Naming a squad after your friends is something I always did in XCOM - later I would hold the real-life counterparts responsible for their shoddy in-game performances. 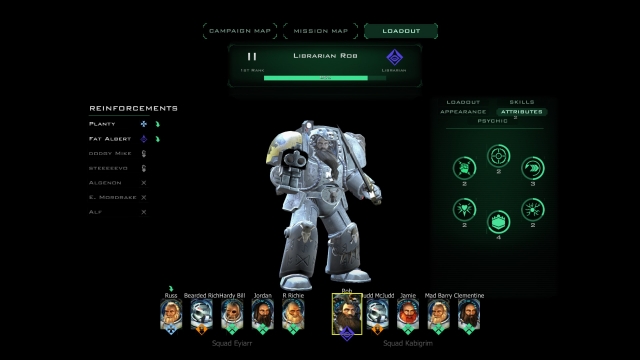 Much like its previous iterations, Space Hulk is not easy. Certainly this version is hard but fair, though with plenty of emphasis on the word hard. People who expect to breeze through every new game they play can expect to be put off - it takes time to learn the best strategies to survive. I’m a bit of a Space Hulk veteran, yet on the higher difficulty levels I questioned whether it was even possible to complete some missions.

The only other problem I had was the game’s user interface, certainly it’s much better than the 2013 version, but it’s still flawed. In a game where even the slightest mistake can mean failure in a mission, it can be so frustrating to accidently issue a wrong command and lose some important APs. On more than one occasion I attempted to select a marine by clicking on him, only for my currently selected squad member to mistake this for a move order. Usually this resulted in certain death for my confused Blood Angel, as he often marched straight into the clawed arms of a grateful genestealer. Though after a few hours of playing I became accustomed to this slightly unfriendly UI. Mistakes occurred less frequently, and eventually I memorised which actions needed to be performed with more care to ensure success. 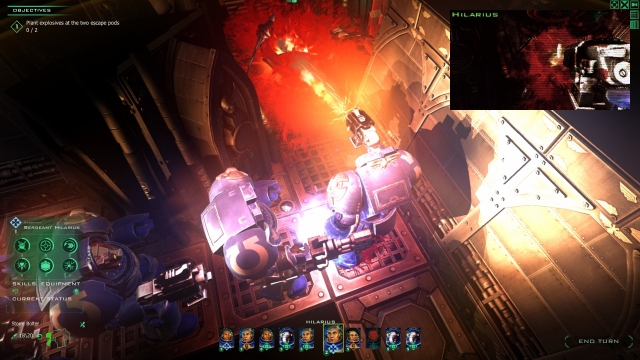 Ascension is certainly the best Space Hulk video game to date - by a long way. The troublesome UI and difficulty may put some off, but these problems certainly don’t detract so much from the game as to make it not enjoyable. If you fancy a slow paced, strategic challenge with almost 100 hours of gameplay, then you will love Ascension. While it’s so close to the spirit of the original tabletop game that fans should add another point to the score. Well done to Full Control for making the Space Hulk game I had envisioned all those years ago, now get started on doing a version of Necromunda, please.

Ascension is certainly the best Space Hulk video game to date - by a long way. The troublesome UI and difficulty may put some off, but these problems certainly don’t detract so much from the game as to make it not enjoyable. If you fancy a slow paced, strategic challenge with almost 100 hours of gameplay, then you will love Ascension. While it’s so close to the spirit of the original tabletop game that fans should add another point to the score. Well done to Full Control for making the Space Hulk game I had envisioned all those years ago, now get started on doing a version of Necromunda, please.

I remember playing a Space Hulk game on a PC in the 90's. I can't recall too much now other than how difficult the game seemed. I never played the tabletop games but I figured that Terminator armors were supposed to be badass. In that game they seemed very vulnerable though, almost too vulnerable which I guess made the game more tense. 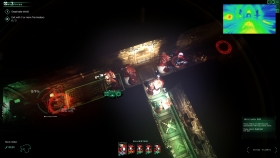