The Great Famine began in 1845 when an infection targeting food crops spread throughout Europe. It lasted approximately seven years, and had a devastating effect on Ireland, where some one million lost their lives from starvation or other related illnesses, with more forced to leave the country. It is estimated that the population of the Emerald Isle reduced by around 20-25%, mostly the result of a pesky fungus called Phytophthora infestans. On average, around three quarters of all potato crops were ruined by this disease – and much of that was exported, as the poor couldn’t even afford to purchase the available produce.

From a history lesson to…Spuds Unearthed? Am I losing my mind? Fear not; I thought I would give some kind of history on the potato, because it’s more context than you get out of this odd little game. Here, there’s certainly no famine – at least not the potato kind, anyway – as you fight an intergalactic war against some weird kind of slime enemies, with spuds. As soon as you whack on your PSVR headset and with Move controllers primed, you’re presented with an incredibly unappealing 14 page “tutorial” talking about things you’ve never heard of. Instead of guiding you through a few stages, holding your virtual hand as you wonder just what the heck is going on, all of this information is thrown at you. I wouldn’t mind so much if, you know, it was easy, but there is so much to remember that when it was time to go into battle with these weird potatoes, I just didn’t quite know what was going on.

The actual premise should be simple. Stripped back, it’s a turret-style defence game with some MOBA aspects. Some bad guy slime thing is at one end of the arena, and you’re at the other. You have two turrets in front of you that you can control, which to be honest is actually pretty good. Grabbing the mounted machine gun with one hand, and cranking it with the other, is an entertaining system. In front of you lie three lanes with enemy “Zombuds” (they’re the evil potatoes, let’s assume they are infected with P. infestans). Firing at them obviously does them in, but you also have some hero spuds too who you can chuck onto the field for some unique abilities. 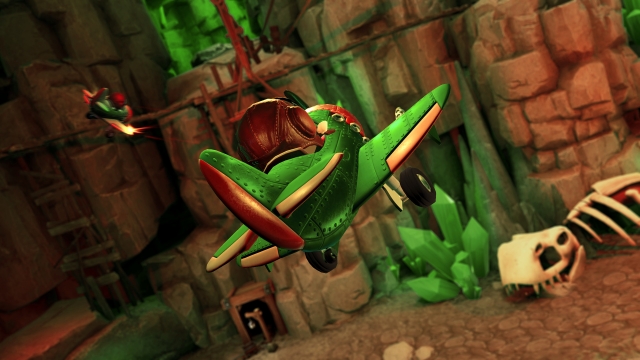 These range from a little RPG guy to another one who flies around shooting baddies from his plane. Pretty cool to watch. What’s not pretty cool is actually throwing them onto the field. It’s so glitchy, and sometimes they just land at your feet. There’s also some system in your home base where you can change their abilities – I don’t even know how that works. Completing battles sees you freeing hostage spuds, so eventually you’ll end up with a decent sized army, although you can only take a selection of three when choosing who to attack next.

The stages you select are all pretty much exactly the same, all featuring three lanes through varying environments. The presentation reminds me of Ratchet & Clank on PS2, which on a PSVR is probably the right style to go for; the fidelity available on it right now doesn’t lend itself to anything ultra-detailed.

The premise I’ve just laid out in the past couple of paragraphs is basic enough, but as soon as the combat begins it all just goes out the window. I kept forgetting which button did what, meaning I was always hammering Square which turns you around 90 degrees (and seriously, keep doing that in VR and pretty soon you’ve just spewed up your dinner), accidentally extending and shortening my arms all over the show, and moving the platform up and down so I couldn’t grab the guns anymore. It made what should have been a simple core loop a frustratingly annoying ordeal. 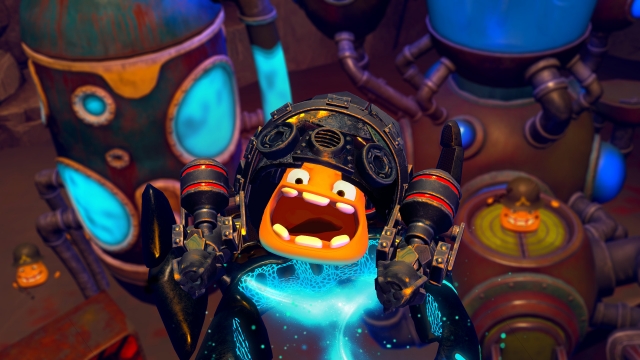 If I sound confused here, it’s because I am. On the stage selection screen, it’ll occasionally show planets that another player is fighting on, but it doesn’t let you select it or anything. So what use is it? I was also constantly having to re-centre myself as, apparently, the depth perception in this game is akin to someone with one eye watching a 3D movie. Sometimes, when cranking the turret, your hands will just disappear and it’ll give up. Eurgh.

What could have been an interesting loop surrounded by an interesting premise ended up with me ultimately frustrated, shaking my hands in fury to get my virtual hands tracking again and cursing in vain inside my virtual reality. I don’t know if it’s just unfinished and more was planned or what, but the leftovers are simply uninspiring, underdeveloped and unsatisfactory. These spuds are better used for a Sunday roast.

There’s a core gameplay loop that could have some substance, but it’s surrounded by a confused interface, a simply awful tutorial, with surface-level complexity that needn’t exist.