The first new non-mobile game set in the Star Trek universe for quite some time, Star Trek Prodigy: Supernova is based on the Nickelodeon cartoon Star Trek: Prodigy, rather than one of the live action shows. It takes place after the mid-season two parter “A Moral Star”, and since the show won’t be coming back for another couple of weeks after this game releases, I’m not sure about spoilers. There are things that could be spoilers for the rest of the season which I won’t mention, but it does mention that two parter several times. This game is probably best played after the show’s 20th episode as extra material, like reading any Star Trek book featuring Picard published between 2002 and 2020.

Star Trek Prodigy: Supernova starts with the USS Protostar encountering a dyson sphere and deciding to check it out before suddenly finding themselves crash landing. Believing their destruction is imminent, the crew are beamed off of the ship — but the transporters malfunction, separating the crew between the three planets orbiting the dyson sphere. It’s up to Dal R’El and Gwyndala to reunite their friends, and get the ship away before the local star goes supernova. The game is an action adventure with a fixed camera and optional co-op. You can play solo and switch between the two characters at will — and you do have to if you want to finish any level. However, it’s best played in co-op, if only because playing solo takes almost twice as long to finish any given level. This wouldn’t be too glaring an issue if not for each level rewarding you for gathering a certain amount of Mineral, the number of times you’re knocked out, and how long it takes to finish. You took 36 minutes on a 25 minute level because you played solo? Tough, no medal for you. The AI can be a touch dim, too, leaving you to fight alone while it stands around not being attacked, or getting stuck in scenery, and it won’t press buttons for you when both characters need to push a button at the same time.

There are three worlds and four levels on each as you try to shut down the processes which are causing the star to go supernova, and put a stop to the deadly Planet Slayer and his robotic Watchers. Both characters have three weapons each, with Dal’s all being long-range phasers, while Gwyn’s are melee forms for her fretwork (the “heirloom” metal armband she turns into a sword in the show). You unlock these as you play through the game, and you’re given a quick go in the holodeck to get used to them. The holodeck can be visited at any point outside of levels to relearn the controls, or to upgrade crew abilities as you rescue them.

Crew abilities are one of the aspects I’m not a huge fan of, because they don’t do a lot of damage and triggering them is absolutely random chance. You get into fights and at some point when attacking enemies your weapon will glow and there’ll be a sound. The next time you hit an enemy, your chosen crew member will do an attack, even if your hit just destroyed an enemy and there are no others nearby. It can happen multiple times per fight, or not even once. 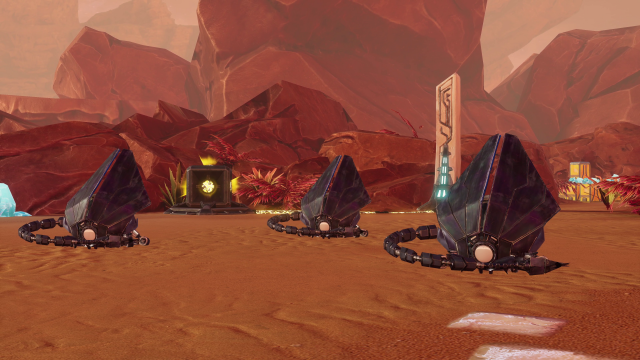 Combat on the whole is fine with a good variety of enemies to ensure you’re not bored, though playing solo it can get frantic especially when the AI teammate is just standing around. Both modes suffer from some bad camera angles with scenery getting in the way, which is annoying and was avoidable with the fixed angle. In co-op if one of you loses all of their health, the other just has to go over and press a button to revive them immediately, so it’s more of a slight annoyance than anything. You can also just wait a few seconds to revive yourself, and playing solo you automatically swap characters when one is knocked out. If both get knocked out they’re both revived moments later in the same battle. I will say that Gwyn’s melee attacks are easier to use, as Dal tends to lock his phasers on to a random enemy or crate of minerals, rather than the one you want him to. All three of Dal’s weapons overheat very easily too, so while they’re powerful in small bursts they’re ill suited for long battles.

Outside of combat the crew are used to access secret areas, usually in levels you’ve already been through. Jankom Pog hacks door terminals, Rok-Tahk smashes through rock falls, Murf squidges beneath doors, and Zero risks everyone's sanity to also hack door terminals. Yeah, that last one isn’t great, as Zero leaves their containment suit to enter door consoles I think? Zero is a Medusan, and seeing one of those with the naked eye sends you insane — that’s a canon fact in Star Trek as well as in Star Trek: Prodigy. Yet they just pop out of their suit while Dal and Gwyn hastily shield their eyes!

While I tried my best to look at Star Trek Prodigy: Supernova from the perspective of a sci-fi cartoon rather than a Star Trek show, the game didn’t want me to. Dal makes frequent references which literally boil down to “[Thing] is like [Star Trek species] [noun]!”. A direct quote is “We’re up a Romulan river without a paddle”, another is “He’s trying to trap us like Caitians”. We’ve been told that Dal has little knowledge of the Alpha Quadrant… But he somehow knows how hot a Cardassian fire pit is? I’ve seen every Star Trek show and movie and I didn’t know that Cardassia even had fire pits. And on another note what makes a Betazoid fridge specifically cold in relation to an ice planet to make Dal reference it, rather than one of the ice worlds in the Alpha Quadrant? These kids are trying to be Starfleet cadets, the ice planet of Andoria is a founding member of the Federation, come on! The writing just feels all kinds of sloppy, which is a shame because the overall story is pretty good — it’s what I’d expect a Star Trek game to be about. But Dal saying he’ll do something “by Worf’s beard!” is simply stupid since the only Enterprise-D crewmember he’s even aware of is a hologram of Beverly Crusher. 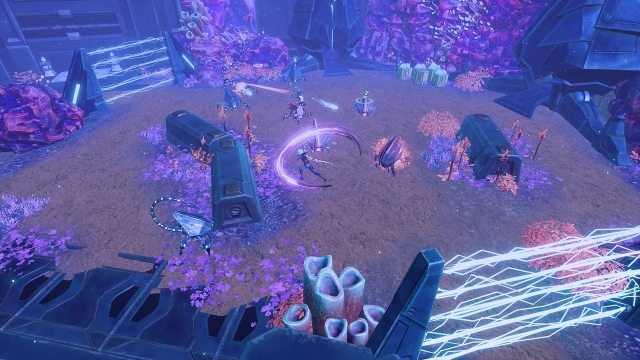 I’ll give them this, however, the stardates given in Dal’s logs seem roughly accurate to the show, so they appear to have actually seen some of the cartoon. But then for everything else they just had a list of alien species and picked at random… It’s like it was written by a bad Bolian writer. See how easy (and lazy) that is?

The other thing I dislike about this game is the voice direction. The voice acting is stellar, this is definitely not the fault of the actors, it is awful direction and not a slight against the cast at all who reprise their roles brilliantly. When the ship is crashing at the start of the game, nobody sounds afraid and delivers their lines very matter-of-factly. Both Dal and Gwyn have lines throughout the game that sound completely unrelated to whatever’s going on, have the wrong emotion applied, or are just blandly delivered. One repeated example of bad direction is when you swap to control Dal, one of the phrases he’ll say is “I’ll TAKE it from here”, with very hard emphasis on “take”.

I know that it’s poor direction because it only affects the younger cast members. Neither Hologram Janeway nor Jankom Pog have a bad delivery because the actors are veterans and would have needed little direction. In fact, judging by the subtitles Jankom adlibs a lot of his dialogue, and rightly so because the script writer clearly wanted him to act differently to how the character does in the show. Yeah, you thought I’d had enough of complaining about the writing, didn’t you? One subtitle was “I’m not doing this to help you, I’m doing this to help the Protostar”, but the voice was more along the lines of “Alright, I’ll come help you”, because Jankom actually likes his friends. 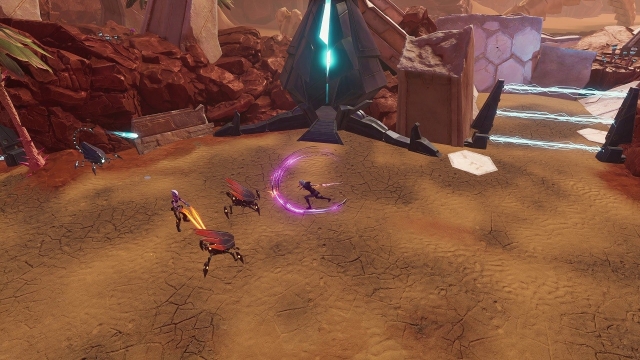 While I’m on the subject, the music is brilliant, though about halfway through the game started to drown out the voices and I had to turn it down, not sure what was up with that. The sound effects are an odd one, because while the transporter sounds right, none of the phasers do…

The graphics are decent and suit the style of the show. The opening cutscene is painted images (which don’t show Hologram Janeway), which is an odd stylistic choice for a tie-in to a CGI cartoon, but it looks fine. There are some issues such as a white light or fog obscuring part of the holodeck, but on the whole I have no complaints as the environments are well designed. The fixed angle of the camera works for the most part, except the aforementioned combat issues.

There are glitches throughout Star Trek Prodigy: Supernova, with more than one softlocking my game. Gwyn and Dal help each other to solve puzzles, for instance with Dal lifting things for Gwyn to crawl beneath, and Gwyn using her fretwork to create a bridge for Dal to cross. I managed to dash over a gap as Gwyn that Dal was supposed to cross using the fretwork, softlocking me as I couldn’t dash back across and requiring a restart from the checkpoint. And while this may be fixed in a day one patch, even with two players both in-game and active it retains the “please connect a controller” message, and there were many spelling, and punctuation errors. I "unlocked Superstrenght mode" when I finished the game... On the whole, Star Trek Prodigy: Supernova is fun and has a story that will entertain (and potentially spoil) fans of the show. It has its issues, but it’s a tie-in to a cartoon aimed at 6-11 year olds. If you’re not a fan of the show, this won’t change your mind, but if you want more from Hologram Janeway, Jankom Pog, Rok-Tahk, Zero, Murf, Gwyn, and Dal, then you’ll want to take a look.

The poor writing and bad direction don’t take away too much from the co-op action of this cartoon tie-in. Fans of the show will definitely get more out of it than non-fans.

Shame the dialogue is so rough and lazy and some of the gameplay so underbaked, it'd be nice to have Star Trek games regularly again, it'd be even nicer if some of them were good.