When it came to making a sequel to the popular 2012 zombie survival simulation State of Decay, it was down to developer Undead Labs to create a familiar-yet-expanded experience that would serve as an appropriate follow-up. “Even now, no one’s done that exact mix of survival, simulation and action we made in the first game,” design director Richard Foge told The Telegraph, “So we wanted to essentially keep things moving forward, enhance some things that people loved.”

In the world of State of Decay 2, players will have to survive in a dynamic, ever-changing environment filled with zombies and hostile survivors. Use your community to build-up your base, share resources and repel the oncoming hordes. This is a game that promises depth in its progression system, in such a way that makes every playthrough feel distinctive.

If you’re familiar with the structure of the first State of Decay then its sequel won’t feel too dissimilar. After choosing to play in one of three maps, you’ll establish a base at a predetermined location and have to venture out to find resources for your community while also completing missions for other survivor enclaves. Performing such tasks will earn reputation which you can use to trade for supplies from other groups, as well as discovering rare luxury items and weaponry. Each playable character has their own statistics that can be improved. ‘Wits’ affects a survivor’s search ability while ‘Cardio’ influences their stamina. Skills that affect combat are also present, and each one has a set of specialisations that allows the player to craft a more unique character. 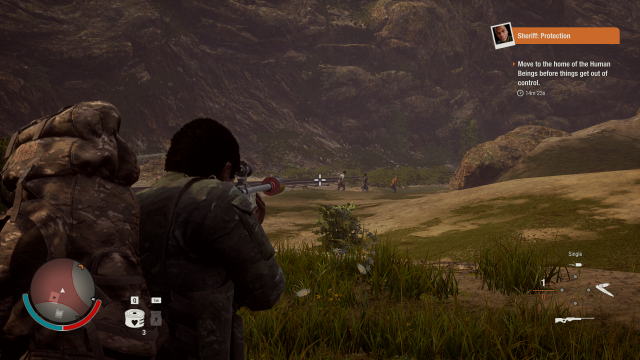 But with this deep progression structure comes a hefty price: should a character fall in combat or succumb to any other dangers in the apocalypse, that person will stay dead for the rest of that save file. Permadeath is a system seen in many games such as XCOM and Darkest Dungeon, with the overall philosophy being that players should feel the stakes are high when performing risky tasks. In many videogames, these stakes don’t feel as dire as they should due to the presence of a checkpoint or save system. With State of Decay 2 each trip outside of the base should be planned accordingly, and it’s always important to consider abandoning a mission or location if the risks outweigh the reward. Luckily this time, the highly controversial offline progression system from the first game has been removed, so there’s no need to worry about the game killing off a character in your absence.

Undead Labs’ founder Jeff Strain talked about permadeath and the decision to remove offline progression in an interview with PC PowerPlay:

“We knew we had to have character death be meaningful to have a really meaningful survival experience. But one thing that emerged was we understood that there was a contract, an implicit contract, with players if you were going to do that, and that is that if you die, you have to believe that it’s from a decision you made and not the game randomly punishing you or the game developers engineering mechanics that just randomly slap you down.”

State of Decay 2 also introduces a disease known as blood plague, a curable but dangerous infection brought on by contact with certain zombie types. Although it originally sounded scary, I soon found this aspect of play to be irrelevant in the long run, as the cure was simple to manufacture and easy to avoid. A bigger threat was found in the form of special zombies returning from the first game. These enemies possess special abilities, such as the Screamer who has an ear-piercing shriek that summons all zombies in the surrounding area as well as stunning the characters, or the Juggernaut, a large titan with immense strength that can charge at the player. Although certainly a necessary part of the core gameplay loop, I was disappointed that Undead Labs didn’t take this as an opportunity to improve these enemies or add additional ones to counter common player tactics that were used in the first game. The closest it comes to feeling punishing comes in the form of plague hearts, large nests of zombies that must be destroyed to continue, but at the cost of making remaining hearts stronger as you wipe them out. 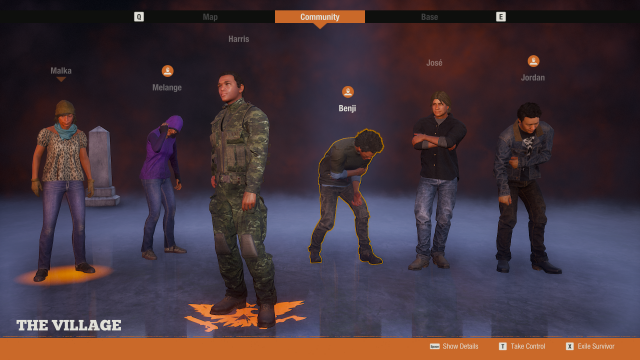 Other mechanics have been expanded upon. Cars now require fuel to keep running. Other survivors can be recruited as followers. Other groups can even be friendly or hostile towards you depending on your actions. Most importantly, base expansion has been vastly improved. Many more facilities are available to build, with countless upgrades and features accessible if you can meet the requirements. This also extends to external sources. If you want water or electricity in your home, you’d need to go out to a water tower or power substation and establish an outpost there, or spend additional resources to make a facility inside the base. This ultimately adds a new layer of difficulty to the game, as you will need to make sacrifices in your base planning in order to build what you need.

That’s not to say that – much like its predecessor – State of Decay 2 doesn’t come with its share of bugs. In my playthrough, I had trouble performing various tasks, from moving through doors, to followers going missing, to loot disappearing from multiplayer games. On the technical side of things, it ran smoothly on my GTX 970. Having not played many games through the Windows 10 store, it took me a while to find a UWP compatible overlay tool that would let me view my framerate, but when I did I was happy to see the game hit the acceptable standard of 60 frames-per-second at a 1080p resolution.

With the amount of glitches, I was happy to see that Undead Labs has included an “unstuck” feature for moments where the game’s environment puts your character into inescapable areas. This only happened once on my initial play-through, however my vehicles would also get stuck or bugged out numerous times, to which I was sad the unstuck command was unable to dislodge it. 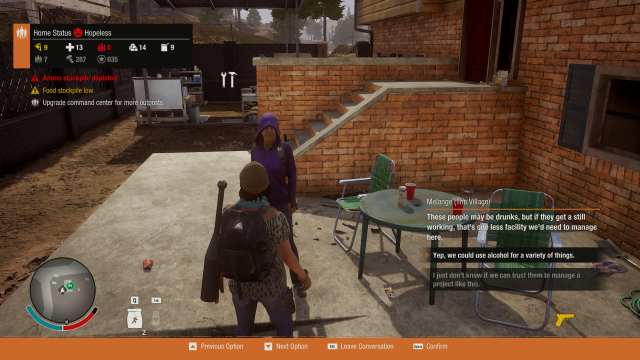 Despite being the main draw of the sequel, I did not have a great time in multiplayer. By trying to fit it around the core gameplay loop of the single-player content, this portion of the game never gets to be unique. Assuming you can even connect to another player to begin with, a lot of multiplayer games often end up being quite disconnected from what the State of Decay experience should be. I wanted to feel like I was surviving with three friends, overcoming all the turmoil and hardships the zombie apocalypse brought while being able to shape the world around us over many hours of play. Instead, it felt more like everyone played their own single-player game, with other people dropping in periodically to help them complete a mission or clear several buildings. Client players can’t upgrade the base or otherwise contribute to any type of progression in the host’s world. You also can’t clear houses separately, as each building will have separate loot for each player – which sort of defeats the idea of telling your friend, “Okay, you search that house and I’ll search this one.” Despite having much potential, the co-op simulation was the main hook of the sequel but it feels like a huge step down from what could have been.

State of Decay 2 (Reviewed on Windows)

With hardly any other true zombie survival simulations on the market, Undead Labs present a competent horror game. It’s rough around the edges, with many bugs and features that feel lacklustre, and a multiplayer that doesn’t fully deliver on its promise, but it’s still a fun ride with many other improvements over the original. For all of its faults, it’s an adventure you can rely on if you were a fan of the first.