If fate doesn’t exist then it sure does know how make itself a recognisable concept. Steins;Gate isn’t a game that is delusional about its use of punctuation, it’s a delusional story that can sometimes make no sense but still sound coherent enough to believe it to be science fact than fiction. Taking the role of Okabe Rintarou, you read a progressing narrative that will make you wonder things like: is time this complex? What is the meaning of existence? And most importantly, am I really that much of a Chuunibyou 2Chan-ner?

Existential questions aside, this is a visual novel, not a kinetic novel akin to Juniper’s Knot (with its lack of choices). Steins;Gate is very text heavy and not something to take lightly. Featuring romance options, it doesn’t contain dating sims mechanics, nor does it provide you the standard make a choice to progress through the story as such. And it’s because this that makes Steins;Gate a great visual novel that people should look as a standard, if not the golden one. 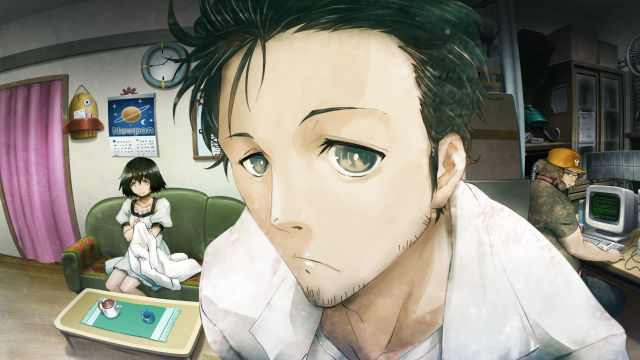 Well well, me thinks we have a quite the page turner.

Right from the get go the prologue launches you into the deep end of content, you’re acquainted with the majority of the cast and presents your speaker (Okabe Rintarou) as being a flamboyant, eccentric megalomaniac (Chuunibyou) that screams Jonathan Strange and Mr Norrel at times. And as the story develops, you can learn to grow fond of him, or love to despise him, for the reasons listed. It’s because of this that splitting it into the three acts is difficult, as depending on your choices, the game can lead to different outcomes and perspectives on the characters, thus there is no definitive Okabe Rintarou that the story alludes either smartly or coincidentally.

For its opening act, it’s blunderbuss of information can leave the reader bogged down with terminology - mixing real world science and fictitious terms. This is sometimes explained/used in passing comments that leave more questions than answers. Whilst the implementation of a glossary book to explain the jargon is done well (for the most part), certain terms could’ve been expanded upon more; mileage will vary based your knowledge of time, space, quantum theories and the like. As parts of the narrative stretches into theoretical thinking that can potentially alienate the reader. It’s implementation of science into the narrative is noteworthy, but its use of McGuffins ruin the pace and moments the story develops. This can run a reader’s patience and sanity thin, making the dark undertones not well founded and hap handed at times; when considering how a similar title Chaos;Head in the Science Adventure series by 5pb and NitroPlus, it may not be a surprise for some people. Ironically, for a visual novel that has time as its core concept, it loses track of time and what the reader sees. It’s through these lack of acknowledgements, that make the brief fade to black seem like a moment be hours and days for the concerning characters. Long thought out changes to the character’s psyche become dramatic one-eighties that stretch your expectations, making characters hollow shells that feel like amateur dramatics as if to say: “I don’t how to make this match the outcome so fast forward to the change”.

As a visual novel, it’s probably the best for quality of life features with the implementation of a glossary for its terms, it can provide a nice break from the information dump the characters give to make science work and time machine fly. The autotext function could do with a tweak with fast readers potentially becoming impatient with the rate that narrative is given. The skip is great for those wishing to replay the game to get other endings as it stops when you receive a message on your phone that corresponds to the game’s narrative. Which is probably the most subtle method I’ve seen for conveying narrative choice without it being obvious for the most part, responding to text messages or picking the phone up can affect the narrative for achievement hunting and story progression/interaction. Compared to other visual novels, this subtle change helps give the narrative more gravitas and player interaction that might otherwise zone out due to either constant reading of text and hitting the next button to proceed through the story.

Having not watched the Anime in the hopes of not spoiling the game’s content, I’m thoroughly blown at what Steins;Gate does with its narrative. Whilst not all characters were incredibly likable with some characters being very cookie cutter archetypes, it’s well written and translated content makes it one of the most recommendable visual novels to play! Let’s hope the rest of the Science Adventure gets released.