The greatest videogame trope of all time is nostalgia. It doesn’t matter when a series releases a shiny new installment. It will never be as good as that masterpiece from our childhood. Only professional wrestling lives off of its past glories more vicariously than videogames. You cannot help but roll your eyes when people try and revive yet another classic from yesteryear. They often fail to deliver, damage the brand and it just leaves a bitter aftertaste in everyone's mouth. The problem with revisiting a historic franchise isn’t just nailing the game, but also having to help people relive the memories of their youth. It can be an impossible task. 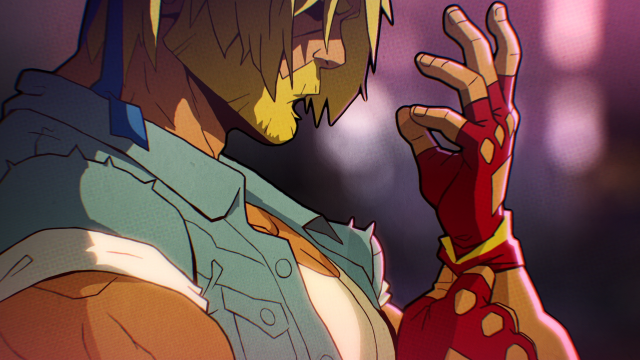 Streets of Rage 4 is the most recent old flame to re-emerge from the depths of our childhood bedrooms. Set 10 years after the events of Streets of Rage 3, the newest installment has players fighting off the children of the franchise's previous evil mastermind, Mr. X. With a combination of new and old faces, paired with a remarkable visual overhaul, Streets of Rage 4 stays true to its traditional formula - delivering a thrilling new side-scrolling beat ‘em up.

My biggest worry from when I saw they were bringing back Streets of Rage was that they would try to modernise it. That fear lingered there until I hit that play button for the first time. The opening cutscene of Streets of Rage 4 is classic cheese. This is full, mature cheddar. One level of Streets of Rage 4 is all it took for me to realise we were getting the authentic, ‘90s arcade experience with this one. It’s clear that this is an homage to the series’ previous installments, rather than its own fresh take.

The game has 12 unlockable characters, but the starting cast consists of childhood heroes Axel and Blaze, alongside two newcomers Cherry and Floyd. Axel and Blaze provide a fun throwback to old installments, playing in a way that will be familiar to series veterans. At times they can feel a little ordinary, especially in contrast to the flamboyant fighting style of Cherry and Floyd. Cherry was my preferred character of choice. A speedy, guitar wielding lunatic with a frantic guitar-slide powermove to finish off opponents. 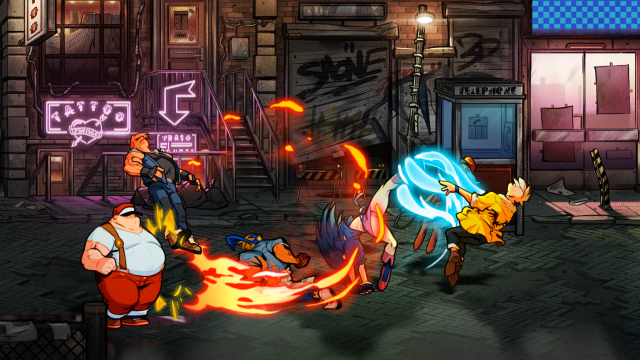 Consisting of 12 stages, the game offers a lot of variance throughout its levels and is completable within three hours, depending on difficulty. There’s a fair level of difficulty in achieving the top grade on each of the 12 stages. Mixed in with the numerous unlockables, I feel there’s enough in Streets of Rage 4 to keep you coming back after just one play through. It’s a good compromise for an otherwise short story.

Streets of Rage 4 brings a challenge reminiscent of its predecessors. Players must power through stages and hordes of enemies, before confronting the big boss at the end of each one. Some stages even throw a mid-stage, mini-boss your way. There’s a tough, yet fun challenge to be found and the game never seems unfair to the player. There are enough ways to heal up and gain extra lives throughout a stage, that the game over screen is generally a sign you’ve made a mistake rather than being punished by poor game design. The introduction of a new ‘combo’ system means you’re able to earn more points throughout a stage, earning extra lives once you’ve attained enough. Even if you do struggle with the base difficulty of Streets of Rage 4, there’s still the option to turn it down or even give yourself extra lives. The traditional difficulty curve remains, but there’s something there for players wanting to enjoy Streets of Rage 4 who may be put off by the game's challenge. The Arcade Mode offers the ultimate challenge. one credit (life), no saves. It’s brutal, masochistic fun.

Streets of Rage 4 has few clear faults, but there are two or three stages that feel lackluster or otherwise mundane in their design. There are two stages which have a section where the AI plunges to its death without a care in the world. It seems shortsighted to have enemy characters that leap about and charge around on small platforms where one misstep would signal your doom. Arguably the most memorable moment of the game is fighting on top of a moving train, but that same stage is ruined by the recklessness of the AI described above.

A fantastic arcade throwback, Streets of Rage 4 remains faithful to the classic series, whilst adding its own fresh twist. The combat is excellent and the new combo system provides players new and old with a steep learning curve to master every stage the game has to offer. Despite missing a truly outstanding stage, the fluid combat and enemy variety more than makes up for it.

Streets of Rage 4 (Reviewed on Windows)

A fantastic arcade throwback, Streets of Rage 4 remains faithful to the classic series, whilst adding its own fresh twist.

Streets of Rage 4 Modernises the Beat 'Em Up Genre