Styx: Master of Shadows is a stealth game releasing in the wake of the rather disappointing Thief game, that didn’t deliver the expected well designed levels and challenging difficulty people loved. So can hardcore fans of the genre find some comfort in Styx?

Disappointingly, the game opens to a rather low quality cutscene with some pretty poor facial animation. The facial animation only seems to feature three or four frames of mouth animation  which can be very distracting when characters are talking, thankfully times when it’s noticeable are few and far between. The cutscene itself serves as a lore dump, introducing us to the humans, elves, giant tower and the magic world-tree. The world-tree being the focus of the story, what the giant tower was built around and the cause of tension between the humans and elves.

Post-cutscene Styx awakens with a headache and unexplained memory loss, which just felt like a cheap way to tutorial me, between this and the opening cutscene my hopes weren’t high for the rest of the game. I began the tutorial in a quest to find Styx’s dagger. I was pleasantly surprised to find the platforming simple and precise especially with keyboard control. The sight and sound based sneaking mechanics are pretty standard and thanks to goblin anatomy you don’t look like an idiot crouch-walking everywhere. After sneaking past some guards and collecting my dagger I was ready to try it out. There are two types of kills to perform: the quiet muffled kind and the other kind that you’ll never use. Then I was introduced to “Amber”, a tree sap/narcotic that gives Styx the power needed to use his abilities. 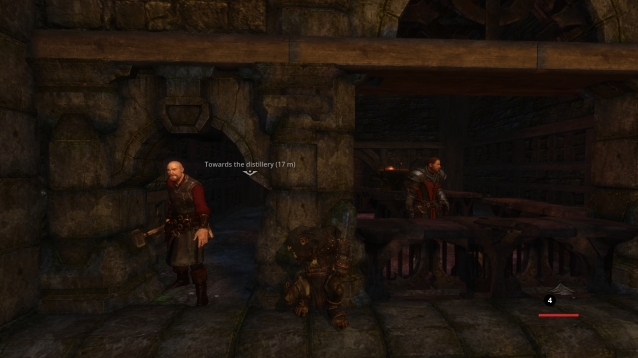 The abilities aren’t really practical as Styx starts the game thoroughly gimped. One ability being the power of invisibility, which sounds amazing. However it only lasts a few seconds and because of Styx’s little legs and the fact you’ll be crouching to reduce sound you won’t get very far. The second ability lets you spawn a little clone which is a lot of fun after some upgrading but in the beginning it’s really only useful for distracting guards and opening specific doors that only he can fit through. The abilities don’t really make the game any easier they just give you more ways to try and fail, which is exactly what I wanted. I don’t want a Dishonoured style overpowered buffet of abilities I want it to be difficult.

The difficulty settings are odd, I played for a while on normal then switched to goblin (highest). Normal difficulty is simply too easy; the time between a guard seeing you and then realising that he should probably start whacking you is ridiculous. You could walk into the guard’s break room put the kettle on and start reading the paper before anyone put their hand to their sword. Coupled with the combat requiring almost no skill, it’s simply timing your clicks to parry and then clicking to kill. This results in you making a mistake and instead of being punished and forced to try again, you just spend three minutes timing parries and then walk through the empty blood soaked room. However, on goblin difficulty the time between a guard seeing and attacking is minimal and if a guard grabs you they automatically kill you. I can’t recommend playing this on any difficulty other than the highest as it’s the only one where I felt my mistakes had consequences.

Waiting, planning your moves and executing them perfectly are majorly satisfying, as they should be. The core gameplay is great and in a genre that has been underserved as of late it’s definitely welcome. Fairness is major when it comes to stealth and I never found myself punished for something that wasn’t my mistake. Every time I died or got spotted it was because of something I did wrong. This definitely gives it that addictive quality as I found myself wanting to come back and play more and more of the game. 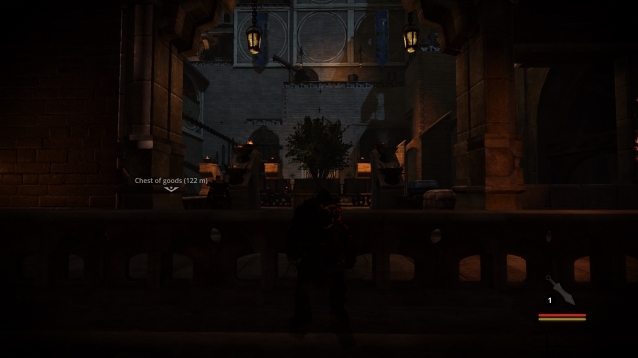 The story is decent, nothing that will blow your mind or have you on the edge of your seat. The setting is great though and every location feels interesting, making you want to explore the levels. Level design is major in any stealth game and Styx keeps it open but still direct, theres always a specified destination but the maps offer a variety of ways to get there. I never felt lost about where to go and when I died multiple times and became frustrated with a situation, some planning always offered a new way of approach. There are collectables on each level and challenges to avoid detection and not kill.

The guards themselves are average, if you have played stealth games before, the A.I. won’t be anything new, but there is some variety to be found in the large insects that operate by sound but not sight. Guards and workers do have some questionable voice acting, one thing I didn’t expect going into this game was to be attacked by a man with a Somerset accent. There’s some dialog to overhear while on missions ranging from story pertinent to inane chatter usually about scoring amber.

Styx: Master of Shadows does some stuff wrong but in the areas it succeeds it gets gold. However with the odd difficulty levels it ranges from being a challenging pure stealth game to feeling almost Assassin’s Creed where the stealth feels unnecessary. Ultimately I think it’s a definite addition to any stealth fan’s library and will certainly be the best recent addition.

You will notice some cut corners but if you are looking for good pure stealth game this is it.

The result of a surprisingly boring genetic experiment.