It may not look like it, but this simple, one button, 2D, platformer has more in common with Dark Souls than it does Super Mario. Super One More Jump is a brutally hard game, the premise however, could not be simpler. The task is to get the character from start to finish, and optionally collect gems along the way. There is only one move, and therefore only one button needed to control the smiling block that traverses the levels. This makes Super One More Jump very accessible, as there is no control scheme to work out. Any button, even tapping the touch-screen, does the same thing.

If this conjures up the idea that the game is easy, then banish those thoughts completely. Super One More Jump is a precise and twitchy platformer. What starts out simply at first very quickly becomes a true test of skill and patience. To complete a level, the timing of jumps has to be absolutely perfect, in this way the game is very unforgiving. There is no tutorial or introduction, Super One More Jump throws the player in at the deep end. The only way to learn the game’s rules and mechanics is by trial-and-error, AKA dying. The difficulty really cranks up by the fourth course and death becomes as frequent as jumping. Death therefore is part and parcel of the game and is actively encouraged due to the trial and error methodology of the gameplay. In the event of a death, the player is instantly transported to the start of the level to try again. There is no waiting or loading - it is fast and snappy - meaning there are no excuses for having just one more go. The game is heavily skill based and therefore it feels like your fate is in your own hands. Time after time I would run the same map over and over again, learning the layout and the optimal method to traverse all the obstacles in the way. I would pass the many ghosts which highlight where I had died in my previous runs.

Whilst the game firmly put progression in my court, based on my ability, there were certain aspects that actually encouraged me to give up on a level. Firstly the difficulty really intensifies, and the more I failed the less confident I became in my own ability to complete the course. The feeling to give up is also strongly influenced by two other mechanics: the ghosts and the death counter. The ghosts of my previous deaths offered no strategic advantage or even an insight into where and why I was failing. They simply reminded me I had died, and the more ghosts that appeared on the screen, the more it felt like the game was gloating at me. The most discouraging factor however, is the death counter. The higher the number climbed, the more embarrassed I felt and the less likely I became to give the level one more go. It can be very demoralising to have your failures thrown in your face, especially when the counter doesn't need to be visible during gameplay. It was not pivotal to my progression and could have been used only in the course select menu, and in turn save me from embarrassment. The final aspect that discouraged me was the option to quickly and easily back out of a level and try a different one, although not every level is open at first and they must be unlocked. All of these things when combined together made it very easy to want to give up. 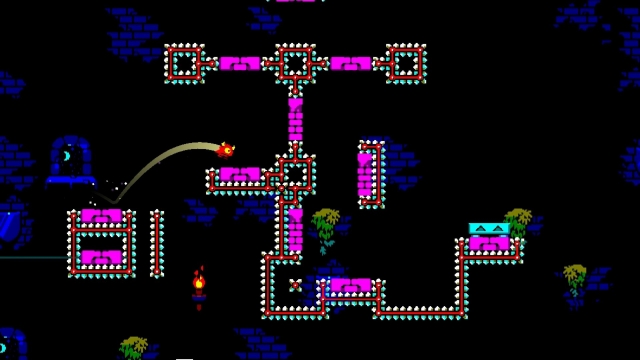 Despite the game feeling like it was rubbing my face in my defeats, I must stress these are really small gripes. The game's difficulty and challenge are addictive, and when I finally beat a stage, especially one I was stuck on, the feeling was euphoric. It's the sort of game where practice makes perfect, the more time I invested, the better I felt I became. This is helped greatly by the way the game feels and moves, it flows smoothly, which allows for the pinpoint accuracy needed to pull off the required jumps.

After completing the majority of levels in a course the next course will unlock, there are eight in total with 12 levels in each set. The levels are relatively short, and along with the instant respawn system makes the game very easy to pick up and play in short bursts. The Nintendo Switch makes this the perfect place to play Super One More Jump as it's well suited to a portable system. The levels can also be customised to the whims of the player. There are eight styles to choose from, all created by pixel artists, giving drastically different looks. The gems that are collected throughout the game can even be spent on unlocking different sprites for the main character. If you would rather jump around as a Japanese sushi, then it has you covered.

For people who suffer with high blood pressure, Super One More Jump is not the game for you. This beautiful, 2D, twitch, platformer will provide a severe test of your timing skills along with your patience. For those who are up for the challenge, Super One More Jump offers an addictive and entertaining ride.

You can turn the death counter off by clicking the left or right analog stick.