Sports games have become a money-making staple in the videogames industry and no sport series has been as dominant as the FIFA franchise. For years, millions of people will flood stores every September to buy the newest FIFA installment. A fraction of those people will pick up the football game equivalent of a bridesmaid - Pro Evolution Soccer. A popular game in its own right, PES has been a long distant second to FIFA since the days of the PlayStation 2. Before this domination however, we used to be flooded in football games. You’d get a World Cup spinoff, a Champions League spinoff. David Beckham and Michael Owen would get their own titles. There was a whole host of arcade football games, even Mario himself would grace the world's most popular sport.

As the years went on, the alternatives would dry up. Every now and then a new title emerges and tries its best feed off the crumbs that FIFA and PES dare to leave. Super Soccer Blast is the newest signing hoping to stand out. It’s a throwback to arcade classics such as Sensible Soccer or Virtua Striker, relying heavily on player skill rather than in-game stats. Developer Unfinished Pixel are in familiar territory, having previously revived both Tennis and Volleyball with its modern ‘arcade’ style. 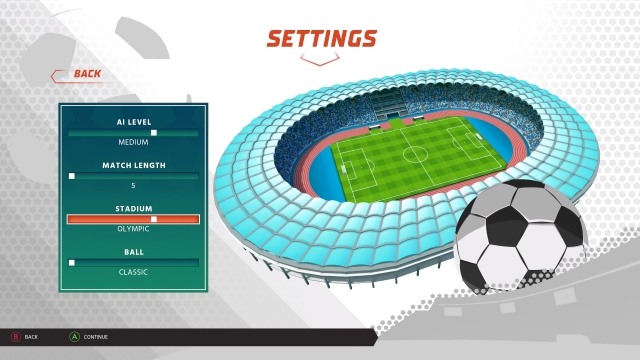 It’s a tidy experience too. The players control well and you feel you really have to work hard for the wins, especially on the harder difficulties. Rather than waiting for players with inflated stats to simply do the work for you, Super Soccer Blast forces the player to be vigilant both defensively and going forward. The game does well to shave off the roughness that you would expect from an arcade football game. The ball moves fluidly and passing the ball around for a team goal is just as rewarding as a 30-yard screamer. The transition from attack to defence is seamless too - something a lot of games have gotten wrong over the years. It doesn’t feel like a chore to move all your players back, and when a defensive error is exploited, you can’t help but blame yourself for the mistake rather than the game.

The ball movement adds a dynamic to the game too. The ability to fizz the ball one way or another as a long range shot ripples the back of the net will never not be enjoyable. The game also does a good job of feeling spacious. Its small pitch may be a concern at first glance, but Super Soccer Blast allows the player a lot of freedom to work with the ball. That lack of clutter in the middle of the pitch really helps alleviate the frustration seen in a lot of other football games. The difficulty options are varied well, and it’s worth giving them all a go. The easiest difficulty is extremely easy. You’ll pick up the game quickly and be winning games 10-0 pretty sharpish. In contrast, the hardest difficulty poses quite the challenge. The AI keeps its shape well, they move the ball around quickly and cause players problems with some very high tempo football at times. Patience is the key for breaking down stronger AI teams. Keeping the ball well will eventually cause a defensive mishap on their behalf, which is expected behaviour in a real football game. 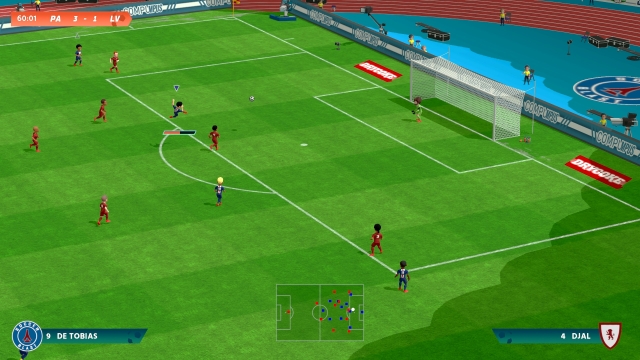 The game modes consist of Quick Play and World Tour. Quick Play is a short match between two different teams, whereas the World Tour consists of five different tournaments. The World Tour is an okay experience, but the longer tournaments can feel like a slog at times. Especially when you’ve won an event with several games to spare. The player also has the option to create their own tournament, which can either be a straight knockout or round robin based. The custom tournament will definitely be a hit for friendly living room events. On top of custom tournaments, players can customise teams and avatars. There’s no real benefit, they’re purely a cosmetic change. Personally I think the game modes are lacking and, given the global situation, the current inability to play couch co-op with friends really hurts the game's longevity. There were hours of competitive fun to be had here, but with us all being isolated it really drives home that lack of online mode. I think a more challenging offline mode would have been beneficial too. At the minute, it’s just playing the same quality of AI over and over. Once you’ve mastered the AI, there’s not much point playing on.

Super Soccer Blast is a fun experience. From the menu theme to the visuals, it’s a great throwback to arcade classics from the ‘80s and ‘90s and it feels really good to play. You’ll spend a lot of time mastering the game and it’ll be a rewarding experience once you do. The lack of varied game modes is disappointing, especially the lack of online play, but you’ll get a significant amount of hours of fun out of the game before you get too bored of it.

Super Soccer Blast isn’t going to revolutionise football games, but it’s an enjoyable title to master and one that’ll prove a hit at gaming parties.