What do you get when you shove a man and a goat into a shopping kart and race through obstacle courses by controlling said kart with their screams? Well, you get Supermarket Shriek from Billy Goat Entertainment, one of the weirdest yet delightfully fun and challenging “shopping” kart racers I have ever played with a surprisingly depressing ending that I won’t spoil for players (if they can get there).

Supermarket Shriek’s story mode begins with no rhyme or reason. A man gets off the bus and is hit by a shopping kart with a goat in it, and then the game just begins. You get a little tutorial at the beginning showing that left trigger controls the man’s screams turning the kart left and right trigger controls the goat's screams which turns the kart right, while holding both triggers makes you go forward. Despite the controls being very simple, controlling the kart with the screams of said man and goat is actually quite difficult to learn and nearly impossible to master. Even towards the end of the nine to 10 hours of play, I was still mixing the triggers/directions up which can get infuriating especially towards the end. The screams themselves can get annoying, to say the least, especially one scream in particular as they both have various screams, but I kind of drowned them out because I was so focused on the levels. The story mode is sectioned off by streets and within these streets are stores you enter which are the levels. There are various game modes with different objectives such as obstacle courses, canned carnage where you knock down as many cans as you can within a time limit, shopping list where you have to collect the items on the list by crashing into them or grand prix which is a race against a unique CPU opponent. The goal is to finish these objectives of each store as fast as possible to earn up to three stars and you cannot move onto the next street until you have enough stars. Luckily, the game doesn’t require you to get three stars on each level, but sometimes you may need to go back to previous levels and get more stars via the bus stop fast travel system if you suck like me.

People who are more skilled than I can probably beat Supermarket Shriek in less time than what I did, but the game has this massive difficulty spike towards the last few stages. I went from beating levels from 10-20 minutes max in the earlier streets to spending over an hour on each level towards the end and it almost broke me. You are not allowed to mess up in this game because one mistake can lead to death, and if you die, you start over from the beginning. The earlier levels this was fine and manageable, but once you hit that difficulty spike it can become aggravating because the levels are much longer than the previous ones and they require much more precision. 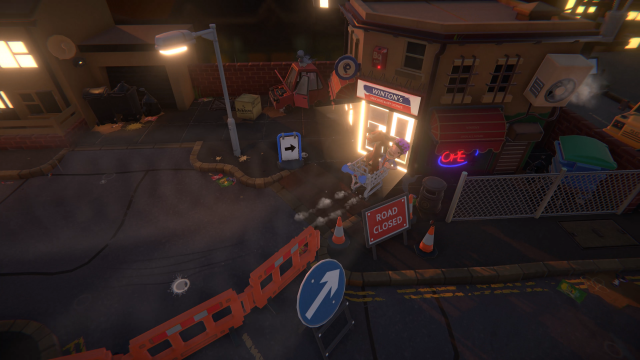 There is also no overview layout of the store/obstacles so once I learned and passed one difficult obstacle there was another one waiting for me, and since I couldn’t have known what’s next, I’d die and start back from the beginning. I think Supermarket Shriek would have definitely benefited from a checkpoint system of sorts or just an overview of what’s to come so I’m not replaying the same level for hours learning every obstacle as I get to it while redoing the difficult ones before.

Despite the random difficulty spike, Supermarket Shriek’s level design is excellent. There are so many awesome ideas that involve themes of the stores like an arcade being an all neon level with air hockey tables and bowling balls being obstacles, or a sports shop where boxing gloves punch you out and punching bags slow you down. There are even levels that play with the screams from the man and goat such as some obstacles only moving when you scream or lasers that activate/deactivate if you scream. I was constantly saying “wow that’s clever” while going through the story mode levels. 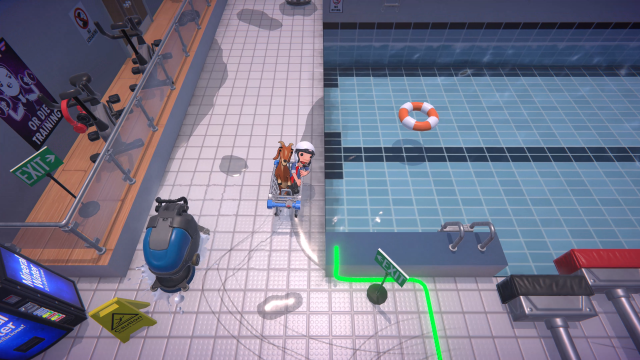 Visually, Supermarket Shriek is nothing crazy, but it looks great for what it is. It has a cell-shaded look to it, but the movements and design remind me a lot of Gang Beasts from Boneloaf. I think the art style they went with is a really good fit for the game since it’s such a bizarre concept, and seeing the man and goat scream in each corner of the screen in this style is hilarious. There are slight framerate issues in a couple of courses, but nothing too severe to affect the gameplay.

Supermarket Shriek can also be played cooperatively, which I didn’t get a chance to try, but I can only imagine the hell that comes with adding another person. Even worse, if you have two microphones, you can play it with your actual screams, which would literally be a nightmare for the more difficult levels and possibly anyone in your general area.

Supermarket Shriek is one of the weirdest concepts for a videogame I have ever seen, but it somehow works. While the later levels can get infuriatingly challenging compared to the earlier ones, Supermarket Shriek has a great selection of game modes, a hilarious visual style, and excellent level design that had me consistently applauding the developer. This is a game I’ll never forget, and maybe one day I’ll try the co-op mode with microphones to annoy everyone around me along with whoever decides to be the goat to my man.

One of the weirdest concepts for a videogame I have ever seen, but it somehow works. While the later levels can get infuriatingly challenging compared to the earlier ones, Supermarket Shriek has a great selection of game modes, a hilarious visual style, and excellent level design that had me consistently applauding the developer.