Narrative-driven games are pretty difficult to review. You can’t talk much about the story, because they’re usually short and interactive, so you could spoil the entire thing in a couple of sentences. In Tacoma there are no quick time events, no puzzles and no god damn quick time events, just pure unadulterated story.

It’s developed by Fullbright, who created Gone Home, the story of a girl in the 80s who returns home to find her sister is missing. Unlike that, however, Tacoma won’t feed you voiceovers to explain things: the amount of story you discover is entirely up to you. You might want to just spend four hours racking up as many zero-gravity basketball points as you can, I’m not your mum. 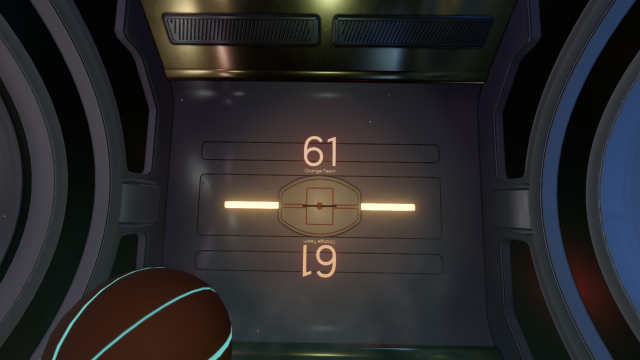 There's a zero-gravity Roomba that will not go through the hoop...

You play as Amy Ferrier, a contractor who has been sent to the eponymous space station Tacoma to discover what happened to its six crew members, and gather as much data from the computers as you can. Upon arriving, you’re given augmented reality (AR) devices which allow the Tacoma systems to show you what went on.

As you explore, you discover AR scenes in each sector of the ship. These can be paused, rewound and fast forwarded to allow you to see things from every angle. If there’s a group of people and you want to see what Roberta’s wandering off for, just follow her. You can then rewind and see what happened when she was out of the room. 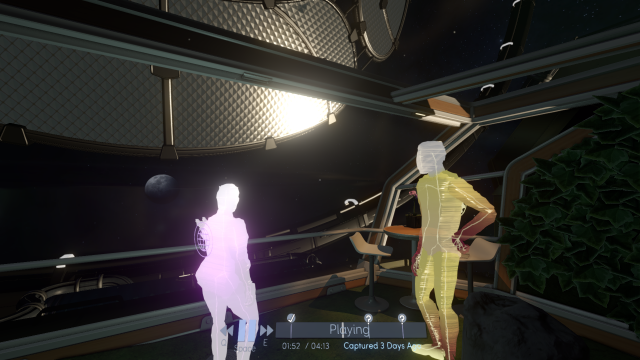 This was in a garden room

The AR scenes aren’t the only things that tell you the story. You can find letters, emails, IM conversations and all sorts littered around the station. Each crew member has quarters filled with possessions that you can pick up, and everyone has a desk which doubles as a computer. You don’t just find out what happened to them, but more importantly why they dealt with it the way they did.

Again, I don’t want to spoil the story, just know that I had a great time enjoying it, and a full 80% of the reason I play games is for a single player story. It’s very well performed and written, and I was hooked the whole way through. I kept trying to fill in the blanks as I went, and I realise as I write this that I was wrong about every assumption I made while I played. The world building is exquisite, giving you just enough information about the future that is 2088 without overloading you.

Of course, since this is set in a sci-fi world, the graphics are a huge leap from the boxy 80s of Gone Home. There are a couple of weird things that scream “SEE?! FUTURE!” such as triangular rolls of duct tape, but I could never leave a room without looking at everything and imagining what purpose it served for Tacoma. 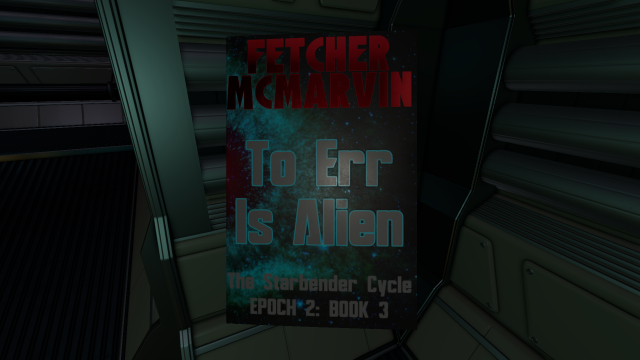 I really wish there were excerpts from the books, like in The Elder Scrolls...

Looking for every single story element, you’re looking at about five hours of gameplay. If you decided to rush through, it would be about half that. Quite why you would want to do that, though, is beyond me. It doesn’t feel like five hours.

I encountered a couple of very minor problems with the game. The frame rate judders when moving from one section of the station to another, and when you throw things they also lose a few frames, though only the item itself. It’s a weird visual, but you only notice it if you’re filling a drawer with everything you can find before you close it. If you’re in to that kind of thing.

Before I sum things up, I’d like to give special mention to the use of sign language. When the AI needs Amy to do a command, it’s not voice operated as you might expect, it’s gestures. It’s a really nice touch.

Now, if you’ve read this far and not realised Tacoma is a narrative-heavy game, then you obviously skipped some paragraphs. If you’re in the mood for an action-oriented game full of angry aliens, you might want to skip Tacoma. If you want a great story told well, that will last an afternoon, then get Tacoma. It knows what it wants to be, and it does that perfectly.

If you want a great story told well, that will last an afternoon, then get Tacoma. It knows what it wants to be, and it does that perfectly.